skip to main content
Return to Fordham University
You are at:Home»Fordham Magazine»Alumni News»Alumni Serve Across the World through JVC and JVC Northwest
Above from left: Fordham College at Rose Hill Class of 2017 alumni Josie Jacob-Dolan, Nick LaBruna, and Maddie Murphy. Photo courtesy of JVC Northwest.
This year, 19 Fordham graduates are serving as men and women for others through their work with the Jesuit Volunteer Corps (JVC) and JVC Northwest. 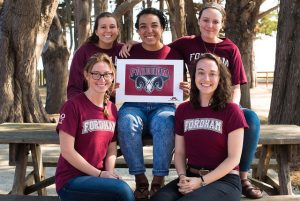 Both organizations place Jesuit Volunteers (JVs) for one- or two-year stints in communities that are tackling some of the world’s greatest challenges: homelessness, hunger, mental illness, crime, and poverty. This year’s Fordham JVs are serving in urban and rural areas across the United States and in six other countries around the world.

Both JVC and JVC Northwest share Fordham’s emphasis on values-centered service that focuses on solidarity over charity, making it transformative for both the communities and the individuals involved.

Related Stories
Learn more about the Fordham alumni who served with JVC in 2016–2017.
Read about two sisters who both went from Fordham to JVC.
Discover the connection between Fordham’s Global Outreach program and JVC.