Legendary actress Susan Lucci, MC ’68, told fellow Marymount alumnae and former faculty that they were “ahead of [their] time” in pursuing an education that empowered women for careers of significance.

“There was not one woman in my class who ever said, ‘Will we get to do what we want to do? Will that be OK?’ Rather, the conversation was, ‘We want to do this, and this is what we’re going to do.’ Nobody hesitated. So much of that is attributed to the Marymount education, and I’m so grateful every day for that,” she said. 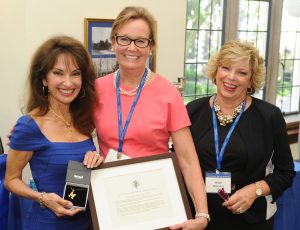 Lucci, who created the iconic character Erica Kane on ABC’s All My Children and now stars on Lifetime’s Devious Maids, received the Alumna of Achievement Award at the Marymount Alumnae Awards Ceremony at Fordham’s Rose Hill campus on Saturday.

She later posted a photo of herself at the ceremony with Brigid Driscoll, RSHM, former president of Marymount, calling Sister Driscoll the “Dynamo behind us all.”

“I will never forget her leadership and support. … I will always treasure the education I received,” wrote Lucci, who also gave shout-outs to Maura Gaines, PhD, MC ’58, and the former head of the Marymount drama department, “the late outstanding Mr. Ronald Weyand.”

Lucci was one of three alumnae honored at the annual event, which was part of Fordham’s Jubilee weekend.

“These three women have shaped our world, supported their alma mater, and been a source of pride for all Marymount graduates and the order of the Religious of the Sacred Heart of Mary,” said Jean Wynn, MC ’80, vice president of the Marymount Alumnae Association Board of Directors.

Mary Donohue, MC ’79, received the Gloria Gaines Memorial Award, given in recognition of service to community, church, and college. Donohue has served in leadership roles in the Marymount alumnae community since 1985 and spearheaded community service projects at employers including JPMorgan and Bank of America.

The Golden Dome Award went to Kay Delaney Bring, MC ’60, in recognition of her commitment to advance the legacy of Marymount College.

She has named the Marymount Legacy Fund as the beneficiary of a $500,000 life insurance policy. To date, it’s the single largest gift to the fund, which was established to preserve the Marymount name and tradition of preparing women for leadership roles. The fund provides financial support to female Fordham students who embody the Marymount spirit.

Lucci, Donohue, and Delaney joined the newly minted Butler Society, a community of Marymount women who have received the alumnae board’s highest honors through the years. The society will serve as an advisory panel to the alumnae board.

Joseph M. McShane, SJ, president of Fordham, commended the 90 alumnae present for carrying on the ideals of Marymount and its founder, Mother Marie Joseph Butler, RHSM, even though the college is no longer in operation.

“Your spirit is a clear indication that the spirit of Marymount and the vision of Mother Butler are not only alive but vibrantly alive,”Father McShane said. “You are treasured, honored, much-loved members of the larger Fordham family.”

Fordham pre-med student Christina Dowe was among those in attendance. The rising senior, whose mother graduated from Marymount, is a recipient of the Marymount Legacy Fund Scholarship. She’s grateful to be a part of the Marymount legacy and for the support of its alumnae.

“This community is so enthusiastic about empowering young girls to go out into the world and become leaders,” Dowe said.