skip to main content
Return to Fordham University
You are at:Home»Fordham Magazine»Alumni News»A Little Lamb That’s Making a Big Difference
Photos by Dana Maxson
On a blustery Saturday in November, a busload of caring and civic-minded young passengers pulled up to the McGinley Center at Fordham’s Rose Hill campus to take part in the fourth annual Make a Difference with Loukoumi Day—an afternoon of fundraising, fun, and community service.

Loukoumi is the title character in a series of children’s books written by Nick Katsoris, GABELLI ’88, LAW ’91, and the inspiration behind the Loukoumi Make a Difference Foundation, a nonprofit Katsoris established to engage and empower kids to lend a helping hand with charitable projects. 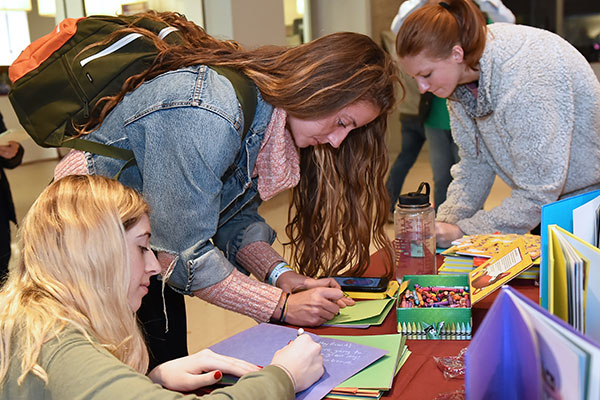 The activities at Fordham were part of the day’s events that included a park cleanup in Queens and a Loukoumi good deeds award presentation to the producers of Come From Away, the hit Broadway musical about the citizens of a Canadian town who embraced passengers from around the world who were stranded there after the September 11 attacks. “It is the ultimate story of kindness and making a difference in the lives of others,” Katsoris says.

Each year, more than 100,000 kids across the country participate in activities sponsored by the Loukoumi Foundation, Katsoris says. Partnering with other organizations, like St. Jude, Kiwanis, and rock star Jon Bon Jovi’s JBJ Soul Kitchen, they have contributed to clothing drives and food banks while raising hundreds of thousands of dollars (through kids’ $1 donations) for various projects, including an ongoing effort to provide $150,000 for a literacy program and treatment room at St. Jude Children’s Research Hospital.

Beyond the numbers, Katsoris always keeps his eye on the mission.

“The most important thing about the Loukoumi Foundation is it teaches kids that doing good can be fun,” he says. “They have a ball doing this stuff, and they want to do more.”

From Candy to a Character

A graduate of Fordham Prep, Fordham University, and Fordham Law School (“I’m what they call a triple Ram”), Katsoris, who is general counsel for the Red Apple Group, always wanted to be a writer. “I wanted to be the next John Grisham,” he says. “It didn’t happen.”

Years later, in 2005, inspired by the birth of his son and a box of Greek candy called loukoumi, Katsoris wrote and published Loukoumi, about the eponymous lamb who gets lost trying to find her way back to America after visiting her grandparents in Greece. He established the foundation four years later, after publishing the third book in the series, Loukoumi’s Good Deeds, which was narrated on CD by Jennifer Anniston and her father, John. “That’s what put us on the map,” Katsoris says.

Other high-profile personalities came on board. Olympia Dukakis and Gloria Gaynor narrated stories on CD; Al Roker, Taylor Swift, Oprah Winfrey, and Justin Timberlake contributed recipes to Loukoumi’s Celebrity Cookbook (2011, NK Publishing). And NBC sportscaster Bob Costas will narrate Loukoumi Saves a Park, the eight book in the series, which is scheduled to be released in time for Earth Day 2019 and the start of the new baseball season.

Katsoris, whose father, Constantine “Gus” Katsoris, is a longtime law professor at Fordham and whose son now attends Fordham Prep, credits his passion for serving others to his Jesuit education and a strong legacy of philanthropy at the University.

Indeed, several members of the Fordham community have joined him in his efforts. Fordham senior Olivia Jones, president of Circle K, the college division of Kiwanis, volunteered for the third straight year at the November event. Eileen Gill-Franklin, GABELLI ’90, LAW ’91, ’96, one of Katsoris’ former Fordham classmates, helped sponsor the Loukoumi Good Deed of the Month curriculum, a program offered in 250 Catholic schools in the New York Archdiocese and the Diocese of Brooklyn, and soon to be incorporated into public school curricula on Staten Island. 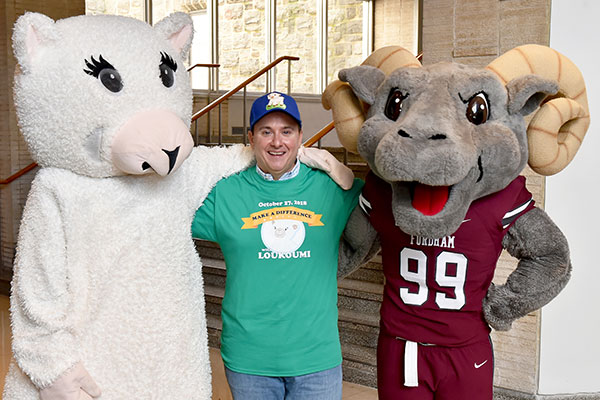 Nick Katsoris with Loukoumi the lamb and the Fordham Ram

Another Fordham alumna, New York Assemblymember Aravella Simotas, FCLC ’99, LAW ’02, participated in the park cleanup in Queens. She says she is grateful for what Katsoris’ stories teach, because “sometimes we’re too busy to remember to instill those values in our kids.”

But Anne-Marie Kirmse, O.P., president of the Fordham Kiwanis Club, may have said it best. “The Loukoumi Foundation helps children see that they can make the world a better place—as children.” 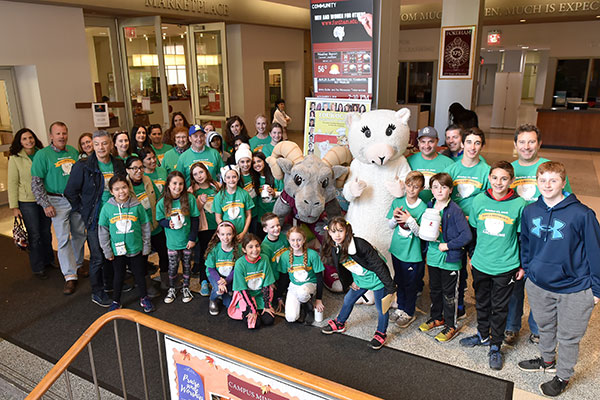