skip to main content
Return to Fordham University
You are at:Home»Fordham Magazine»Features»Alan Alda Honored at SAG Awards, Says Actors Can Help Heal a Divided Culture
Photo: TNT
Upon receiving a lifetime achievement award from the Screen Actors Guild on Jan. 27, Alan Alda, FCRH ’56, delivered a poignant speech about his lifelong vocation and the healing power of empathy.

Before taking the stage at the guild’s annual awards dinner in Los Angeles, Alda was introduced by Tom Hanks, who worked with Alda on the 2015 film Bridge of Spies. Hanks saluted him “not just for his decades of work and praiseworthy credits but for how he has shown us all who we are and what we all can be.”

He said the choices Alda has made throughout his six-decade career—as an actor, writer, director, activist, and philanthropist—have reflected “the time and the tenor of our troubled world and of our human natures.”

As part of his introduction, Hanks presented a three-minute highlight reel of the actor’s work through the years. The clips, drawn from some of Alda’s most memorable film and TV appearances, showcased his everyman appeal, his wise and wisecracking wit, and his gifts for both comedy and drama.

“You know, it’s really hard to describe to you what it feels like to look out and see my fellow actors—my colleagues, my heroes—welcome me up here like this. It’s an extraordinary feeling,” Alda said upon receiving the SAG Life Achievement Award.

‘See the World Through Another Person’s Eyes’

He said the honor comes at a time when he’s been reflecting on what it means to be a member of “our brotherhood and sisterhood of actors.”

“When we get a chance to act,” he said, “it’s our job, at least in part, to get inside a character’s head and to search for a way to see life from that person’s point of view—another person’s vision of the world—and then to let an audience experience that.

“It may never have been more urgent to see the world through another person’s eyes than when a culture is divided so sharply,” he added. “Actors can help, at least a little, just by doing what we do.”

For Alda, who turned 83 on Jan. 28, that means continuing to act, both on TV (most recently in Ray Donovan) and in films.

It also means passing along the lessons he’s learned about the art and science of good communication. That’s the subject of his most recent book, If I Understood You, Would I Have This Look on My Face? and of Clear + Vivid, a podcast he launched last summer to share “conversations with some of the most interesting people I know about how we communicate and relate to the most important people in our lives.” 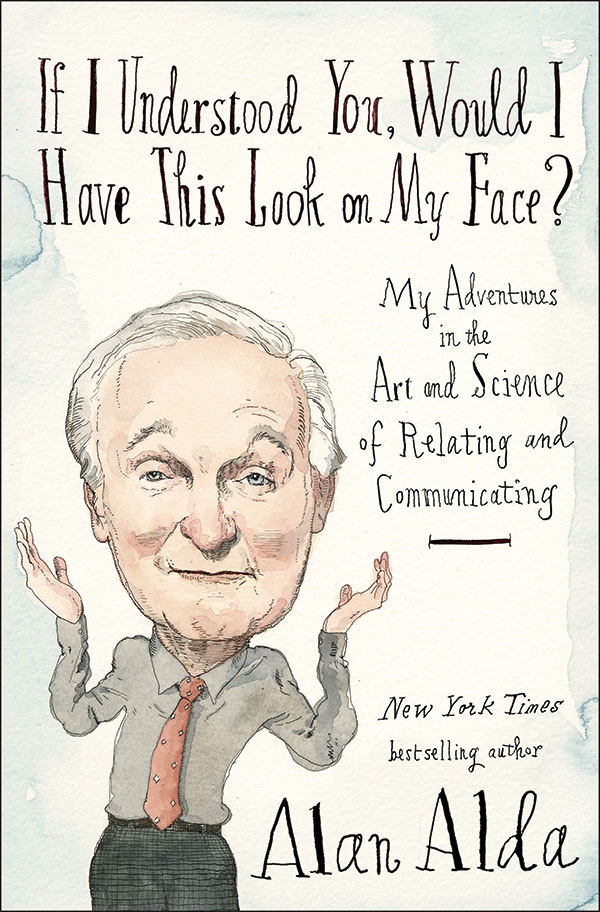 Last summer, Alda revealed in an interview on CBS that several years ago he was diagnosed with Parkinson’s disease, a neurodegenerative disorder. But the diagnosis hasn’t slowed him down, he said. Since then, “I’ve acted, I’ve given talks … I started this new podcast. … It hasn’t stopped my life at all. I’ve had a richer life than I’ve had up until now.”

After graduating from Fordham with a degree in English in 1956, Alda joined an improvisational theater company and later worked on Broadway and in Hollywood before landing the role for which he is perhaps best known.

In 1972, he was cast as Captain Benjamin Franklin “Hawkeye” Pierce, the cocky and insubordinate but brilliant and beloved Army doctor in the TV show M*A*S*H—the long-running anti-war comedy series set during the Korean War. For his work on the show, Alda earned five Emmy Awards in 11 years, three for acting and one each for writing and directing. He is the only performer to earn Emmys in each of those three categories for work on the same series.

More recently, Alda earned another remarkable distinction: In a single year, 2005, he was nominated for three major awards—an Oscar (for his role as a corrupt U.S. senator in The Aviator), an Emmy (for his turn as a presidential candidate on The West Wing), and a Tony (for his work in the Broadway revival of Glengarry Glen Ross). That’s something only five other performers have done. But Alda one-upped them—in 2005, he also published the first of his three bestselling books, a memoir titled Never Have Your Dog Stuffed, and Other Things I’ve Learned. 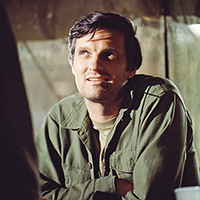 Alda as Hawkeye Pierce in M*A*S*H

For years, Alda has helped broaden the public’s understanding of science—as host of the long-running PBS series Scientific American Frontiers and through the Alan Alda Center for Communicating Science at Stony Brook University, which he established in 2009 to help scientists and health professionals “communicate complex topics in clear, vivid, and engaging ways.”

He has received numerous awards for his work in communicating science, including the National Academy of Sciences Public Welfare Medal.

Fordham has honored Alda on several occasions, inducting him into its Hall of Honor in 2012 and presenting him with an honorary degree in 1978, when he delivered the commencement address.

Reflecting on his undergraduate days at Fordham, he once expressed gratitude for his professors, “some very generous people … who invited me to step up and shake hands with my own brain.”

“Since then,” he said, “I’ve often thought that if people can think clearly and use their language well, then their education has been a lucky gift and they will probably find themselves useful to the world, and the world to them.”