Mark C. Smith’s job advising pro athletes, entertainers, and others as a VP of wealth management at UBS Financial Services keeps him plenty busy. Yet somehow, the 2004 graduate of Fordham College at Rose Hill finds time to be a true renaissance man.

Among his pursuits outside of his day job, Smith serves on the board of Safe Horizon, an organization that provides social services for victims of abuse and violent crimes; owns a Harlem tour group company that leads jazz club crawls; acts in the occasional community theater production in his hometown of Bridgeport, Connecticut; and, when he has a moment, keeps up practice on the trombone.

“I’m all over the place,” jokes Smith, who says that his varied interests lead a diverse group of Fordham students and recent graduates to seek out his advice, which he shares with them regularly as a member of the Fordham President’s Council. “Politics, Wall Street, entrepreneurship—I get questions from everyone,” he says, referring to the council’s fall leadership series gathering in November. 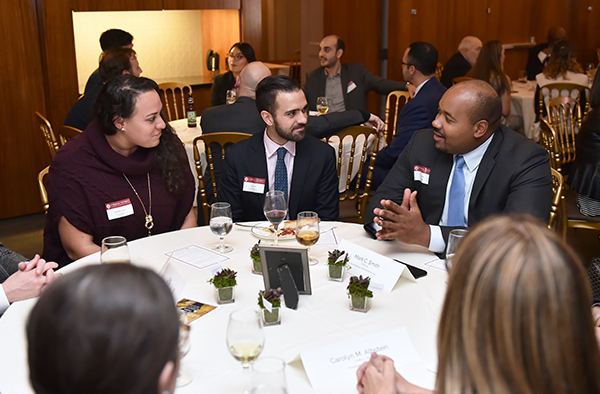 Smith’s ability to serve as an informed mentor to a wide swath of graduating students and young alumni has its roots in his studies as a history and sociology double major at Rose Hill, along with the University’s core curriculum, he says. When entering Fordham as a first-year student, Smith had every intention of studying political science, but he became enthralled with the new information about familiar topics he got out of history and sociology classes.

After graduating, Smith worked as a campaign coordinator for Charlie King, then a candidate for New York attorney general. When he spoke to his friend Michael Biondo, FCRH ’04, who was working on Wall Street, though, he realized his history studies prepared him well for a job in the financial sector.

“You just needed to be able to explain complex things to people in a simple way,” Smith says. “And that’s one of the things you learn being a history major—how you boil things down into succinct thoughts.”

It’s clear that Smith has found success doing just that, as he was recently named by Forbes as a “2018 Top Next-Gen Wealth Advisor,” an accomplishment that speaks to his dedication within his profession.

“The great thing about working in wealth management is you are your own boss and you kind of determine how you want to run your own business,” he says of why his job has kept him engaged since he started at UBS in 2006. “I’m able to actually add value for folks in a real way that’ll help their family for years to come.”

That desire to help others carries over to his role on the President’s Council, but Smith also appreciates that the council allows him gain valuable insights about the economy from the perspective of job seekers.

“It’s a great way to get a litmus test of what’s going on in the real world,” Smith says. “You get a lot out of it also because the kids are super grateful and you feel like you’re making an impact.”

While not every graduate will be able to find time for as many passion projects as Smith, and while even fewer will wind up in professional circles that allow them to join a group vacation with Oprah Winfrey, as Smith has, he feels confident that Fordham is the best place not only for launching students on their career paths but for developing their overall growth as individuals.

“Being at Fordham, I think you definitely are educated on the whole person—not just your intellectual side, but your spiritual side and your moral side,” Smith says of his alma mater. “Fordham has so much to offer its students in growing who they are in a deeper way, and I think that’s something that sticks with you.”

What are you most passionate about?
Right now, I’m most passionate about giving back through Safe Horizon, where I’m on the board. They’re the largest service provider for victims of violence in the country. We serve over 250,000 people, women and children primarily, per year in the five boroughs of New York, and we provide comprehensive health, helping them deal with everything from leaving a violent situation and finding immediate housing to providing them with a lawyer, counseling, job advice, and anything to get them from crisis to confidence.

What’s the best piece of advice you’ve ever received?
That there are 24 hours in a day. What does that mean? In my first job, I was complaining about, “Oh, I don’t get to do this, I don’t get to do that,” and my boss told me, “Mark, there are 24 hours in a day. You can work here, then you go home, do your passion, then give back, then have a girlfriend. You have all this time in the day. Use every single hour, every minute of your day to accomplish what you want to do.”

What’s your favorite place in New York City? In the world?
My favorite place in New York City is Harlem. I feel like I’m at home because of the cultural significance it has played in American history, with its renaissance in the 1920s, and it has a very robust political community that is unrivaled around the country. They have great food and great jazz, amazing parks, and beautiful town homes. And it feels like a community.

My favorite place in the world—I’ve traveled to over 30 countries—would have to be Italy. I love the food, the culture, the wine. It’s a really, really cool place to hang out. I fell in love with just being on the Amalfi Coast and looking at the ocean from cliffs, and then going to Florence, and hanging out in one of the coolest cities in the world with the best food, and then being a 20-minute drive from Tuscany with the best wine in the world. So yeah, Italy has a special place in my heart.

Name a book that has had a lasting influence on you.
Howard Zinn’s A People’s History of the United States. My whole life, I had learned about American history through the lens of public school education and learning the history the school system wanted us to be taught. And Zinn basically slammed the door on all of those thoughts that you had and gave you the raw deal of what happens in this country, unencumbered by people thinking, “Oh, we can’t talk about that.” It really just made you question everything and then question the validity of everything you hear. It really taught me to not just take someone else’s word for things, but to find out for myself. It was just like, “Holy mackerel. Everything I knew to this date was wrong.” This book had a serious impact on me coming out of high school.

Who is the Fordham grad or professor you admire most?
I’m gonna go with Dr. Mark Naison. He really did have a great influence on my Fordham career. I remember being excited to go to his class From Rock and Roll to Hip-Hop because you never knew what kind of food was gonna be laying around that he just ordered for the students to eat and enjoy. You’re listening to old-school hip-hop and discussing what was happening at that point in history with the black experience over Chinese food or ribs from Johnson’s BBQ. He was a great professor to have. And then he also took students to experience life outside the campus walls. So we’d go play golf in Crotona Park, or he took us around on hip-hop tours around the Bronx. He really did make the Bronx a larger campus for us.