skip to main content
Return to Fordham University
You are at:Home»Fordham Magazine»A Trip to the American Museum of Natural History
Robert J. Reilly leads a Fordham alumni and friends group tour through the Hall of Saurischian Dinosaurs. Photos by Sirin Samman.
On a sunny late-January morning in Manhattan, a group of 17 Fordham alumni and friends gathers just inside the 81st Street entrance to the American Museum of Natural History, where they are greeted by Robert J. Reilly, FCRH ’72, LAW ’75. For more than 20 years, Reilly—who recently retired as an assistant dean at Fordham Law School—has been leading group tours of the 151-year-old museum, introducing people to its vast and varied holdings while imparting a passion for environmental science.

Although many of Reilly’s tours include visitors from around the world, the Fordham group skews local, with most attendees hailing from the tri-state area. The person who has traveled the farthest for the occasion is Marjorie Taylor, who says she drove from Harrisburg, Pennsylvania, the previous day and stayed overnight in her daughter’s McMahon Hall dorm room on Fordham’s Lincoln Center campus.

Once introductions are made, Reilly leads the group to the museum’s fourth floor, which he says “tells the story of the evolution of vertebrates.” There, they stop in the Hall of Saurischian Dinosaurs, one of the museum’s most popular rooms and home to the skeletons of both the Tyrannosaurus rex and the huge Apatosaurus, the herbivore often incorrectly referred to as the Brontosaurus.

“Fred Flintstone was actually eating an Apatosaurus,” Reilly jokes, referring to the 1960s cartoon character and the so-called Brontosaurus burgers that were a staple of his diet.

Reilly describes various dinosaur extinction theories that scientists have posited over the years, including the widely accepted one—that an asteroid crashed into what is today Mexico’s Yucatán Peninsula and caused massive climate disruption—as well as the disproven claim that pollen caused them to sneeze themselves out of existence.

Next, he leads the way to the Akeley Hall of African Mammals. The hall, decorated with green marble and Art Deco flourishes, represents “the apex of taxidermy,” Reilly says. It is filled with lifelike recreations of lions, giraffes, gazelles, and other mammals in dioramas depicting scenes of the wildlife eating, drinking, and hunting in their natural habitats. Recreated from field scientists’ observations of specific locations in the early 20th century, as well as from the sketches and photographs of the artists who accompanied them, the dioramas consist not only of taxidermy but also meticulously crafted plant models and painted backgrounds.

Reilly dispenses several bits of trivia about Akeley Hall. The live versions of the African elephants that form the room’s centerpiece have 50,000 muscles in their trunks, he says; the mountain gorilla diorama depicts the supposed gravesite of the hall’s namesake and conceiver, Carl Akeley, who is considered the father of modern taxidermy; and each of the 28 dioramas in the hall would cost $1 million to create today. 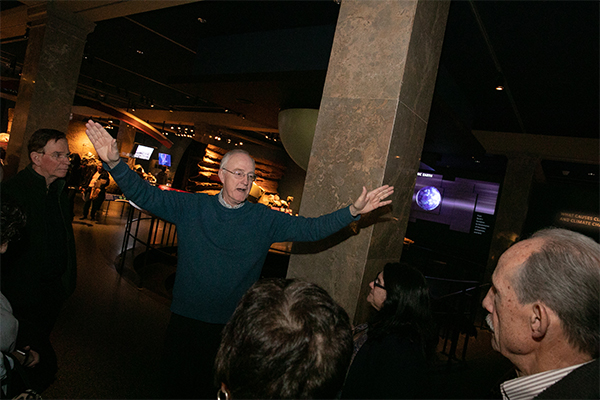 Robert J. Reilly speaking to the alumni and friends group.

From there, it’s off to the Birds of the World exhibit hall, where Reilly, standing in front of a diorama of king penguins in South Georgia, surprises the group by telling them that the largest bird population in New York City is not, as several of them guess, the pigeon. In fact, it’s that nemesis of beachgoers, the seagull.

Reilly leads the way to the Hall of North American Forests, which he later says has become one of his favorite rooms in the museum.

“In recent times, the most interesting to me is the Hall of North American Forests,” he says, noting that he tries to get across to museumgoers the importance of forests and trees to the Earth. Plus, he says, “The beauty of every individual tree makes just walking down the street a treat no matter where you are.”

Reilly began his undergraduate career at Fordham as a biology major, and although he switched to political science, earned a Fordham Law degree, and spent more than three decades as an administrator at Fordham Law School, he has always been deeply interested in environmental science.

When asked to explain the connections between his career—especially at Fordham Law’s Feerick Center for Social Justice, where he was engaged with social justice issues from a legal and academic perspective—and his role as tour guide who encourages stewardship of the natural world, Reilly points to the link between the Jesuit values he lived at Fordham and the specific topic of environmental justice.

“Pope Francis recently had an encyclical about environmental issues and about our respect for the Earth and our understanding of our relationship to all other living things. Those elements all sort of tie together … in understanding social justice.”

Upon leaving the Hall of North American Forests, Reilly encourages everyone in the group to go home, choose a tree that they could observe over time, and become intimately familiar with it. “Every tree is a perfect tree,” he says.

The next stop is the ever-popular Milstein Family Hall of Ocean Life, with its 94-foot-long model of a blue whale suspended from the ceiling. Reilly, noting that this model is not taxidermy because its skin is artificial, tells the group that for the first 100 days of their lives, blue whales put on 100 pounds a day. 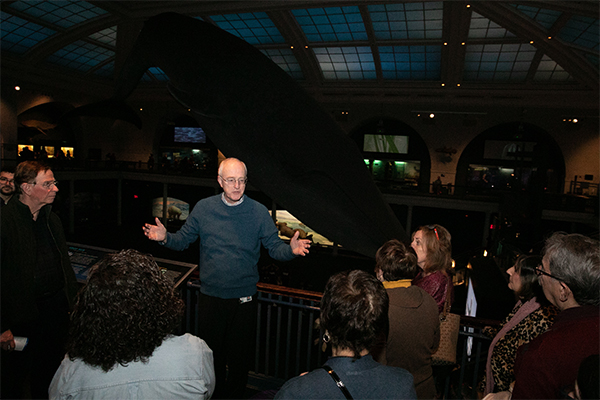 Robert J. Reilly and the group in the Milstein Family Hall of Ocean Life.

Finally, Reilly leads everyone to Theodore Roosevelt Memorial Hall. There, he provides some history of the 26th president of the United States, a conservationist and champion of the National Park System. As part of New York state’s official memorial to Roosevelt, the hall is a fitting place for the group of mostly tri-state residents to reflect on the important lessons the museum—and Reilly—had taught them about the natural world.

Fordham and AMNH: A Deep History with Enduring Connections

Fordham’s connections to the American Museum of Natural History go beyond Reilly. Not only do several graduates currently work at the museum—in departments ranging from youth initiatives to genomics operations—but one of the key figures in the institution’s modern history was an alumnus.

Thomas Nicholson, Ph.D., GSE ’53, ’61, a self-described “sailor-turned-astronomer-turned museum director,” helped the museum navigate tough fiscal issues in the early 1970s and emerge stronger. He got his start at the museum’s Hayden Planetarium in 1952 while earning a doctorate in science education at Fordham. He rose to the museum’s top spot in 1969 and served as director until 1989, during which time the museum’s research staff was doubled and attendance increased from 2.1 million to 3.1 million visitors per year. Today, the museum draws around 5 million visitors per year, as pointed out in a new history of the museum—The American Museum of Natural History and How It Got That Way, by Colin Davey with Thomas A. Lesser—published last year by Fordham University Press. 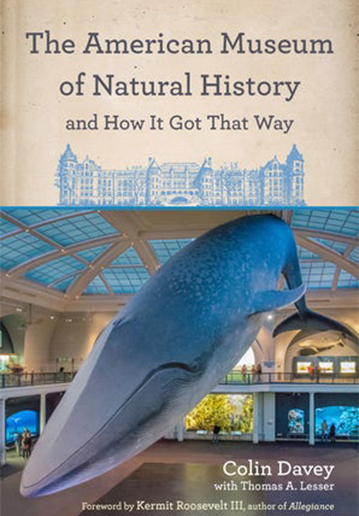 The museum’s growth is easy to understand when witnessing the enthusiasm of the Fordham group after their tour’s completion. One couple enjoyed the tour so much that they plan to become members of the museum, while another attendee went even further, emailing Reilly to tell him that he was inspired to apply to become a volunteer tour guide himself.

Perhaps the most surprising response to the tour came from Carolyn Pagani, GSS ’91, a native New Yorker who revealed that the Fordham tour was her first time ever visiting the museum.

While not every tour group gives him the chance to expose a lifelong New Yorker to the museum’s magic, Reilly, who also leads occasional group tours of the Church of St. Paul the Apostle and Fordham’s Rose Hill and Lincoln Center campuses, gets plenty of joy from witnessing attendees’ reactions to the exhibitions.

“To see their faces as they get excited about something, that’s a wonderful thing,” he says.

As he leaves the group, he reminds them that the things they learned on the tour are invitations to further discoveries.

“Finishing a visit to the American Museum of Natural History is not the end of a journey,” Reilly says. “It’s the beginning of one.” 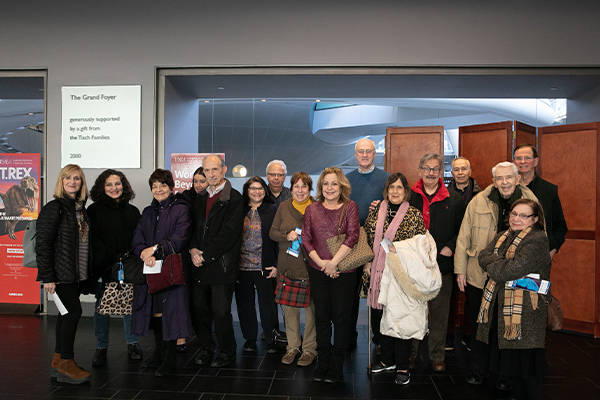 The alumni and friends group with Robert J. Reilly, seventh from right.

The tour of the American Museum of Natural History was one of many cultural events regularly held in the New York area and around the country by Fordham’s Office of Alumni Relations. Upcoming events include concerts, theater performances, and more.