skip to main content
Return to Fordham University
You are at:Home»Fordham Magazine»A Resilient Spirit: Billy Keenan’s Journey from Calamity to Hope
Photos by Bruce Gilbert
Five years ago, Billy Keenan, FCRH ’89, had it all. He was a high school teacher in North Rockland, New York, guitarist in an Irish-American party band, father of two boys, and triathlete who loved the open water.

Then a catastrophic surfing accident on the New Jersey shore in September 2013 shattered his life in an instant. A wave slammed him headfirst into the ocean floor, fracturing his neck in five places. His heart stopped. Emergency workers resuscitated him on the ambulance ride to the hospital.

When Keenan awoke, he was paralyzed from the mid-chest down. His prognosis was bleak. Doctors weren’t sure he’d ever be able to breathe on his own.

‘I Cried to God for Mercy’

Five years later, Keenan visited Fordham’s Westchester campus in West Harrison to speak about his recovery, and how he clawed his way back to once more live a fulfilling life. It was a steep climb for the Fordham ROTC grad, who served as a U.S. Army platoon leader in Honduras in 1992.

“My grief was so profound I couldn’t sleep,” recalled Keenan. “I lay there, listening to the sound of the ventilator. I cried to God for mercy, and mercy meant a peaceful passing. I felt I could be of no good, of no service, only a burden to my children, my family, and my friends.”

What changed Keenan’s attitude was a conversation he had eight weeks after his surfing calamity with former New York City police detective Steven McDonald, who’d been living with quadriplegia since 1986, when he was shot three times in the line of duty. McDonald told Keenan that God had a role for him, that life would return.

Gone were many of Keenan’s joys: playing guitar and tin whistle with the band, Summer Wind; competing in sports; and teaching history to teens in the high school classroom.

“I had a huge decision to make: Do I allow the darkness to consume me and beat me down and defeat me?” he said.

Four months after he broke his neck, Keenan was off the ventilator. He learned to maneuver a motorized wheelchair with the “sip and puff” technology that lets him steer it with inhalation or exhalation.

“I can’t imagine going through a small piece of what Billy has gone through and still remain positive,” said Houlihan, GABELLI ’74, a Fordham trustee who helped bring Keenan to campus to share his story. “He did not choose to go to the dark side. He did not give up.” 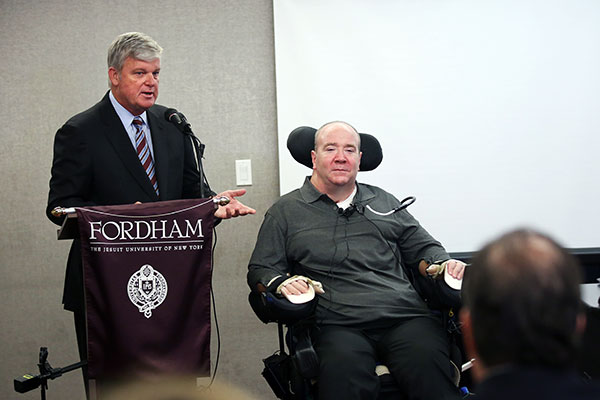 ‘A Message of Hope’

By 2015, Keenan was teaching again at North Rockland High. Almost two years later, however, he was hospitalized for two weeks and almost died from an infection that ended his teaching career.

Keenan said he faced that recurring question: “Do I sit in a room feeling sorry for myself, getting lost in self-pity? That didn’t happen. I realized I wasn’t strong enough to teach five days a week, but I was strong enough to speak one or two times a week, to share a message of hope to people who feel beaten down.”

Keenan’s mind remains sharp, his voice strong, his will unwavering.

“I want you to remember the man in the wheelchair,” he said at the Fordham event.  “You are able-bodied and able-minded. There is absolutely nothing you cannot do. Imagine what you can achieve, the adversity you can fight through and withstand. In the end, the decision is yours.”

After the speech, several attendees gathered around Keenan to thank him for his inspiring words. One woman was so touched that tears streamed down her face from the realization that she’d be happier if she appreciated what was good in her own life. 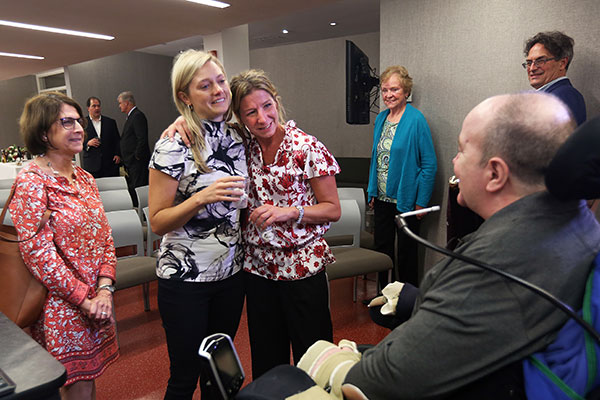