“You know that kid on your block who was older than you and was great at sports, who had a great dog that he didn’t have to walk on a leash, who everybody wanted to be when they grew up? He wore that jacket,” says Gulotta, who grew up in Queens, “and that’s when I first came to know of Fordham.”

Gulotta went on to graduate from Fordham College at Lincoln Center in 1982 and, after two years, returned to Fordham for law school. Now a Manhattan real estate attorney with his own firm and the founding CEO of a data protection company, he shares his love of Fordham with others through teaching and mentorship.

Gulotta says he was drawn to real estate law because it allows him to work on a transaction with a client from start to finish. And it was particularly important for him to start his own firm because he wanted to create his own culture—a culture inspired by one he found within the Fordham community.

“I wanted to create my own soil, if you will, where I could blossom the most” and help employees and clients do the same, Gulotta says. “As a businessperson, I don’t want to take advantage of people. I want to invest in my employees and let them know I am loyal to them so they too could thrive. And I wanted to figure out what my clients were going to want before they asked for it.”

That’s what drove him to co-found Real Estate Data Shield in 2012. He had noticed a big compliance gap in the mortgage industry: Banks and other lenders regularly share consumers’ non-public personal information (Social Security numbers, tax records, etc.) with title companies, attorneys, and other third-party vendors—not all of whom adhere to the same strict laws when it comes to safeguarding consumers’ data.

His response wasn’t what one might expect. Instead of developing a technological solution, he helped create a compliance and information security training program specifically tailored to the real estate industry. “That’s because the single greatest risk factor in any kind of information security is the human,” he says. “Depending on the study you read, about 40% of all incidents can be traced back to human misfeasance or malfeasance.”

It’s what he’s best known for in the field, and it’s an insight he shares with his students at Fordham’s Real Estate Institute, where he teaches a course on legal concepts in real estate. The institute, founded in 2016, offers an M.S. and several graduate and professional certificate programs in real estate finance, development, and construction management. “I love working with the students,” he says. “For most of them, it’s their first Fordham experience. And I get to give them guidance and mentorship, to bridge the gaps and actually get down in the trenches and coach them in a personalized way, just as my Fordham professors coached me.” 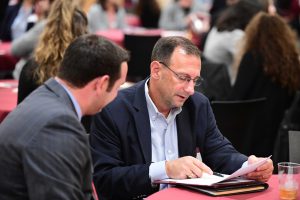 He brings that same mindset to the Fordham Mentoring Program, where he has been volunteering for 10 years. Each year he is paired with a new mentee, but he’s also done training sessions for his fellow mentors. His biggest tip? “I tell them that before you start offering advice, listen. Really listen and understand who you’re working with, what their strengths and weaknesses are, what their aspirations are, and what they need from you” he says. “Build trust and be a good listener.”

He is proud to have played a small role in how the 15-year-old program has blossomed, growing from just a few dozen mentors in its first year to more than 200 today. Gulotta has been most impressed with the addition of new events like speed interviewing and social outings, where mentors and mentees can bond.

While he has remained connected to all of his previous mentees in some way, he has formed a particularly strong bond with his first: Brandon Brown, GABELLI ’10, who was recently promoted to director of pro scouting for the Philadelphia Eagles.

“Chris was like a sounding board for me,” Brown says of Gulotta’s role in helping him figure out his next steps when he realized he wouldn’t have a playing career in the NFL. “He was like, ‘Hey, can I help you think through that?’ He wasn’t pushing. That’s where I think the foundation for a long-term relationship was built for us.

Gulotta says he gets more out of working with each student than he ever anticipated.

“You know, there’s a counterintuitive reward from giving. You think if you give something, you have less, because you just gave something away,” he says. “But it actually comes back in spades.”

What are you most passionate about?
In business, always focusing on being relevant and being known for doing it right.

In my family life as a husband, father, son, et cetera, I’m most passionate about understanding how to best support those I care most about—being mindful of giving them what they need, the way they need it, as much as possible.

And, on a very personal level, it’s two things. The first is staying calm enough, through all the stress and multitasking, so as to let those great realizations form or emerge and not rush into bad decisions. It’s the Xing Yi concept of “no mind,” erasing the cluttered blackboard that is our mind so these great ideas can present themselves. And the second is challenging myself physically, being willing to see and feel my limits and working to see those measures change, hopefully for the better.

What’s the best piece of advice you’ve ever received?
Actually, there are a few, but two are from Father John Adam, who taught me at Fordham: “Life doesn’t work if you don’t keep your promises.” And “The mind is like a parachute; if it’s not open, it doesn’t work.” I think he meant the first one just as much about yourself as about others. We all have rationalizations to get through the day, but if we really start lying to ourselves, life just doesn’t work. The second piece of advice was just very vivid and stuck with me. It reminds me to be as open-minded as possible.

What’s your favorite place in New York City? In the world?
In New York City, it would be either Central Park or Riverside Park. Both offer incredible views, allowing us New Yorkers the opportunity to find calm, run, bike, walk, visit with friends, and get some balance from all the stress we find in the other parts of NYC.

In the world, it would be a toss-up between Cathedral Brook, which is a remote ski trail at Belleayre Mountain in New York, and Northern Italy’s Val D’Aosta. It’s lined with former Roman forts (now museums and inns), has gorgeous, glacier-fed, fast-flowing rivers, and the Nebbiolo grape is happy there.

Of course, any mountain, beach, forest, greenway, or my living room with my family and pooches also works.

Name a book that has had a lasting influence on you.
This is the toughest question you’ve asked. At 21, in my senior year at FCLC, I took a course called Philosophy of the Absurd with Professor Bernadette Bucher, who was born and raised in France. She had actually studied under Jean Paul Sartre. Assigned readings included Albert Camus’ “The Myth of Sisyphus,” written during the Nazi occupation of France.

We all know the story of the Greek myth. Sisyphus had been naughty, and the gods had sentenced him to pushing a boulder up a hill, only to have it roll back down each day—an eternity of hopeless struggle. Yet Camus tells us that he envisions Sisyphus happy or content, for he has accepted his fate and his struggle. And in doing so, he rises above it and has ultimately found contentment.

Life throws a lot of curveballs at us, both good and bad. It’s tempting to give up or think we’re victims. Facing challenges—understanding that the sooner we start trying to tackle them, the better off we are—and then smiling at and accepting the course of our journey was my personal takeaway.

The Fordham grad would be my very first mentee, Brandon Brown. Nearly 10 years ago, he was a young man on a football scholarship at Fordham. In his junior year, he realized that for various reasons the NFL draft wasn’t a likely possibility for him. It was a sad realization for a truly gifted athlete who worked tirelessly since he was 10 years old on his fitness, technique, and understanding of the game. Yet he pulled himself up by the bootstraps, accepted this new reality, improved his academics, attended law school, and found his way back to his true passion as a football scout for Boston College. Within two years he moved up to the NFL as a scout for the Indianapolis Colts and was later recruited by the Philadelphia Eagles, where he now plays an integral role for the 2018 Super Bowl champions as the director of pro scouting.

Most mentor-mentee stories involve the mentor inspiring the mentee. But thankfully, in this instance, Brandon’s constant pushing of that boulder up the hill has and continues to inspire me.

As for Fordham professors, both Father Adam and Professor Bernard Gilligan, one an actual Jesuit and the other a virtual Jesuit, demonstrated a level of care, kindness, and joy in their teaching craft by helping scores of Fordham students like myself learn how to think, how to question, how to articulate, and how to reason. They are the embodiment of what makes Fordham special for me and are the very reason that I mentored Brandon and scores of great young women and men—and will joyfully continue to do so.