skip to main content
Return to Fordham University
You are at:Home»Fordham Magazine»Features»A Fordham-Marymount Love Story: Joyce and Brian Abamont
For Joyce Abamont, MC ’66, and Brian Abamont, UGE ’66, GSE ’71 (above), the consolidation of Marymount College with Fordham University in 2002 was a familiar blending, a mirror of their own romance. (Photo by Bruce Gilbert)

In 1963, Joyce Onorato was a sophomore history major at Marymount College, when she agreed to join one of her suitemates on a double date. She met Brian Abamont, a science major at St. John’s University. Weeks later, he invited Joyce to a movie. She recalls thinking he was not her type, but she went anyway and had a strange flash that she would marry him.

They didn’t see each other again until the first night of summer classes at 302 Broadway, Fordham’s Manhattan home for undergraduates at the time. Joyce had enrolled in an economics course there, and Brian had transferred to Fordham from St. John’s to major in education. He walked out of an elevator one evening and bumped into Joyce. They began dating, and soon she was wearing his Fordham pin.

“I would ask her every night if she wanted a ride home from class,” says Brian, who, like Joyce, grew up in Queens. “I kept asking, and she said no. One night, she said yes. I took her home that night—and every night since!” 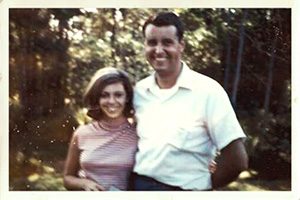 Summer of ’65: Joyce and Brian at his grandmother’s summer home at Lake Oscawana, near Peekskill, New York.

In 1966, Joyce graduated from Marymount and began taking summer classes at NYU for a master’s degree in European history while Brian completed his education degree at Fordham.

“I was following my mother’s instructions not to get engaged until I graduated,” he says. “The night I finished my last course, I was anxious.”

So anxious that he proposed to Joyce in his car in front of 302 Broadway. A year later, they were married.

Brian began his career in education as a high school social studies teacher and retired as an assistant principal in guidance in 2002. Joyce also worked as a teacher but dreamed of law school. Following the birth of their fourth child, with the support of her mother and Brian, she earned a law degree from St. John’s in 1988. She eventually joined MetLife as managing attorney in the company’s Long Island office, a position she’s held for 18 years.

The couple has kept their Fordham-Marymount connection alive. Joyce has served on the board of the Marymount Alumnae Association of Fordham University (she was president of the alumnae board at the time of the consolidation with Fordham). And she and Brian continue to support the Marymount Legacy Fund, an endowed scholarship fund that helps young women follow their educational dreams at Fordham.

Earlier this month, the Abamonts returned to Fordham to celebrate their 50th reunion—their first as Golden Rams—during Jubilee weekend. Joyce was presented with the Marymount Golden Dome Award, which is given each year to an alumna whose efforts of service and achievement have benefited Marymount.

With a 50th wedding anniversary coming up next July, Joyce recalls that it was those days at 302 Broadway that really brought the couple together.

“After that year at Fordham, we both knew,” she says. “And that hasn’t changed.”