Presidents have crossed them. Bono sang on them. Thousands of graduates climb them each spring to accept degrees. But Fordham’s Keating Hall steps, long known as the most historic spot on campus, may also deserve another moniker: the Most Romantic Place at Rose Hill.

The Keating Hall steps, engraved with the names of heads of state who have visited campus, was the site of the Corrigans’ very first kiss, on a drizzly spring evening in 2005. Five years later, Keating served as the location of Will’s surprise wedding proposal.

Will had interned in Fordham’s alumni relations office as a student, and he kept in touch with several contacts there after graduating. In late 2010, he called on them for help with his plan to lure Angelica (née Iacono) back to campus for the proposal, asking them to create a fake evite for an alumni Christmas party to take place the first week of December in Keating Hall.

Will planned to ask Angelica to marry him on the steps of Keating, but when they arrived on campus that frigid Friday, Angelica insisted it was too cold to walk to the steps at the front of the building and wanted to enter through a side door instead. Somewhere in between, Will got down on one knee and proposed.

“There was a mix of tears and runny noses,” said Angelica. “But there was no hesitation in my reply, and it wasn’t because I was freezing but because there was nothing to think over or consider. I knew he was the one!”

Eventually, they entered Keating Hall so Angelica could take off her gloves and put on the ring. She then insisted that they get to the party—which she still didn’t realize wasn’t happening.

Instead, in true Fordham style, Will had made reservations at their favorite Arthur Avenue restaurant, Emilia’s, and after dinner, they stopped at another favorite hangout, Pugsley’s—where “Pizza is good and love is it!”—to tell the owners their news.

“Pugsley’s was a big part of our Fordham lives,” said Will. “Countless late nights were spent there just hanging out eating a Ritchie’s special or a garlic bread with cheese, or singing karaoke, or some other late-night shenanigans. We even got them to reopen after the Senior Ball.”

Owner Sal Natale recalled how Will and Angelica had started coming in as part of a group and over time came in as a couple, eventually winning a karaoke contest together.

“They are both beautiful people, and we watched their love grow,” he said. “We couldn’t ignore what we saw in them.”

Will and Angelica were married on May 5, 2012, at Our Lady of Lourdes Church in Malverne, New York. The wedding party included their former classmates Christina Morea (FCRH ’07), Annette Vetrano (GSB ’07), Katrina Vetrano (FCRH ’07), and Robert Rowe (FCRH ’07), and more than 20 Fordham alumni attended the reception. 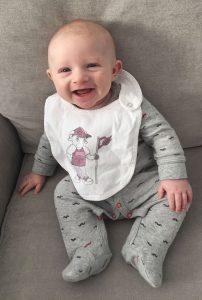 Today, Will is a performance and reward manager for HSBC, and Angelica is a social worker for the North Shore-LIJ Health System, where she works at an elementary school mental health clinic. She is taking a little time off, though, on maternity leave with the couple’s three-month-old son, Nino.

Wanting to acknowledge the important place Fordham has in their lives, the Corrigans recently decided to give back to the University that brought them together. They made a gift to the Fordham Founder’s Undergraduate Scholarship Fund, and in so doing became members of the Young Alumni President’s Club.

As a former Founder’s Scholar, Will knows well the help scholarship support brings students, “how much of a burden was lifted off of me and my family.” He said giving back helps keep the Fordham community strong.

“Father McShane, from his first day talking to us, said, ‘We’re going to make Fordham the number one Catholic university in the country.’ And he hasn’t stopped,” said Will, referring to Joseph M. McShane, S.J., president of Fordham. “In order to continue that, [we wanted]to give back.”

But at heart the Corrigans’ reasons for giving are personal.

“We had such a good experience at Fordham, and it is so close to our hearts,” said Angelica. “Our relationship, our marriage, our friendships … just to give kids who might not have the opportunity the extra help to get there. That’s why we give back.”

And while Will is still lamenting that Nino’s impending birth caused them to miss Homecoming last fall, and that Angelica has not yet let him bring Nino to visit the Rose Hill campus because of all the cold New York weather, he still feels that there might be a bit of the Ram in his son.

“I’m not saying that Nino will go to Fordham,” said Will. “But maybe he will meet his wife there someday.”

Now that would be some Fordham love story.