skip to main content
Return to Fordham University
You are at:Home»Fordham Magazine»A Fordham Graduate Who Navigated Surfing’s Journey to the Olympics
Bob Mignogna, GABELLI ’70, at the IOC headquarters in Lausanne, Switzerland. Photos courtesy of Bob Mignogna
When surfing made its Olympic debut on July 24, it was thanks to years of efforts by athletes and industry professionals who wanted to see wave riding on the sports world’s largest stage. Bob Mignogna, GABELLI ’70, was one of those industry professionals.

As director general of the International Surfing Association from 2010 to 2014 and the publisher of Surfing Magazine before that, Mignogna has spent most of his life surrounded by the sport he loves—and trying to bring it to more people around the world.

Called to the North Shore

A Queens native, Mignogna moved to Long Island with his family when he was 11. It was there that he began surfing, finding time for his passion while attending Bishop Reilly High School. He grew up in a devout Catholic household, and his appreciation for Jesuit education, along with a desire to stay in New York City, made Fordham a natural choice for him when it came time for college.

After earning a degree in finance, he taught at St. Rita’s Catholic School in Long Island City, Queens, while taking graduate courses in education at St. John’s University. Meanwhile, he remained drawn to the ocean, surfing in his spare time and diligently reading Surfer and Surfing magazines. He found himself especially enraptured by Drew Kampion’s writing about the North Shore on Oahu, Hawaii, where surfers from across the country and beyond gathered to ride some of the best waves around and enjoy the laid-back beach culture. 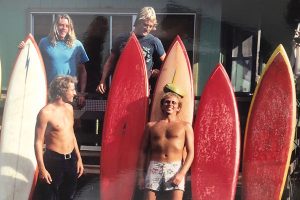 “I fantasized about wanting to live that lifestyle that he talked about and that was in those pictures that I saw,” Mignogna recalls. “And after my third year of teaching, I made a relatively spontaneous decision that I was not going to go back.”

Mignogna arrived in Hawaii in September 1973 and made his way straight to the North Shore. He had saved enough money that he was able to focus solely on surfing and surf photography. He began to sell some of his photos to magazines in the United States and abroad, and the following summer, he got an assignment from Surfing to take photos at the U.S. Championships in Cape Hatteras, North Carolina. A few months later, after a meeting with a staff member, he took an ad sales job at the magazine and moved to California.

Growing Surfing and Joining the ISA

Mignogna quickly realized the magazine needed to set itself apart from its rival publication, Surfer. He thought it could do that by focusing on the push to professionalize the sport.

“That tactic became a long-term strategy, and it wound up working,” Mignogna says. “We not only became the magazine of pro surfing, we eventually became the number one [surfing]magazine in the world.”

In the years that followed, Mignogna moved up the masthead at Surfing, eventually becoming publisher. He also got involved with numerous trade organizations and environmental nonprofits, including the Surfrider Foundation and the Surf Industry Manufacturers Association.

Through these organizations and the magazine, which he left in 2003, Mignogna made a vast network of connections in the surf world. One of those connections was with Fernando Aguerre, the Argentinian founder and owner of sandal company Reef, who had become president of the International Surfing Association (ISA) in 1994.

As an advertiser with Surfing, Aguerre had grown close to Mignogna, and when he was looking for someone to oversee the day-to-day operations of ISA in 2010, he turned to the former publisher. As director general, Mignogna helped to increase the organization’s revenues, introducing annual events and expanding the number of member nations.

The Long Road to the Olympics 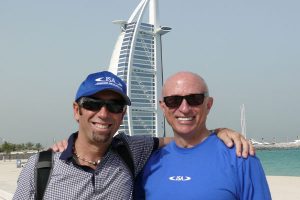 Bob Mignogna, right, with Fernando Aguerre at a 2010 IOC gathering in Dubai.

Since the 1990s, one of Aguerre’s priorities had been to work with the International Olympic Committee (IOC) to make surfing an Olympic sport—a goal first stated in 1912 by Duke Kahanamoku, a medal-winning Olympic swimmer from Hawaii. With Mignogna on board, that push intensified. He traveled to Lausanne, Switzerland, several times a year to meet with IOC officials and update them on the continued growth of professional surfing—and the sport’s readiness for the big stage.

Mignogna left ISA in 2014, but thanks in part to groundwork he laid, the IOC voted in 2016 to approve surfing as an Olympic sport, and the following year, the Tokyo Organising Committee approved the sport for the 2020 games.

On July 23, after a year’s delay because of the COVID-19 pandemic, Mignogna watched as Lucca Mesinas and Daniella Rosas, two surfers from Peru, carried in their country’s flag during the opening ceremony. He has a special affinity for Peru, where he spent much time helping to develop surfing competitions, and from where he brought a surfer who is the son of a seventh-generation indigenous fisherman and waterman to speak to the IOC. As he watched the games, it was evident to him that for many nations, the sport can function as a path to glory.

“These kids know that they’ll be a hero in their country if they ever get to surf for their country on the Olympic surfing team,” Mignogna says. “They will be a sports hero.”

Dedication to a Sport and to Family 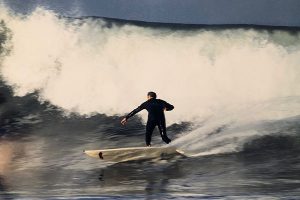 The belief that surfing can be a positive force in people’s lives has been at the heart of Mignogna’s career. He initially took the ad sales job at Surfing, he says, because he thought he could help reach young people and instill in them a passion for the sport.

When it comes to wanting to make an impact, he says he is inspired by his father, Ferdinand, who as assistant postmaster for the United States Postal Service’s Long Island City branch created a religious reading room for workers of any religion to pray and have access to sacred texts. When he died in 1975, the office honored him with a bronze plaque to commemorate his service. It reads, “For a lifetime of devotion and dedication to the improvement of the quality of life of his fellow man.”

“I’ll be 72 next month,” Mignogna says, reflecting on his own life’s work and what surfing’s place at the Olympics means to him. “The runway is shorter in front of me than behind me. So I do spend a fair amount of time thinking about, ‘Did I accomplish some big objective in my life? And do the people who matter to me, my three kids, do they see that?’

“And, so I look at it now and I go, ‘Okay, Bob, you owe it to yourself to take some degree of satisfaction out of this.’”