skip to main content
Return to Fordham University
You are at:Home»Fordham Magazine»A Conversation with Abstract Artist Farida Hughes
Photo by B.A. Van Sise
In spite of its white floors, white walls, and white ceilings, the sunny Baltimore studio of Farida Hughes, FCLC ’91, is a monument to color. Perched above a hardscrabble side street on the city’s east side, Hughes’ studio occupies a corner of a former 19th-century gas lamp factory that’s now home to a variety of artists. Jam bands practice downstairs, kids argue in the street, and sirens wail down the neighboring avenues. Inside her studio, however, Hughes works quietly, and methodically, in a broad old room among scores of canvases on makeshift drafting tables. While she works on several projects each day, she primarily spends her hours overlapping oil paint and resin for her Blends series, in which several colors are placed over one another, remaining distinct but also forming, in any one piece, a rainbow of contrasting and complementing hues created by the bonds among them.

Hughes, who earned a B.A. in studio art and English at Fordham College at Lincoln Center and an M.F.A. in painting at the University of Chicago, exhibits her work frequently, including at the recent I Contain Multitudes show at the Milwaukee Institute of Art and Design. That exhibition invited viewers to “consider how multiculturalism impacts their lives, and how it relates to the issues of immigration and diversity in today’s society.”

She spoke with FORDHAM magazine about her own background, her artistic process, and how people’s stories inform her work.

In a statement about your work, you wrote about the idea of blending in terms of your own multicultural background. What is that background, exactly?
My father is an immigrant from India. My mother is German, but she was born here. So, German Indian.

An American family.
An American family. Two religions. I’ve always felt that I’ve had that duality in my world, and I kind of straddled both religions, the cultural differences. But also my mother grew up on a farm, my father grew up in the city. I currently live in a more pastoral setting, but I have my studio in the city. And I think I gain energy from both of those environments, and I like to bridge them.

How does your own sense of multiculturalism inform what comes out in your work?
I think it’s probably the heart of my work. It’s become the heart of my subject matter dealing with relationships between people, and how we get along, and how we form community, and how we understand each other. My Common Threads series is really about that, using the threads as a natural metaphor for shared experiences as we discuss things and start to unfold who we are and where we’re from, and find those links. 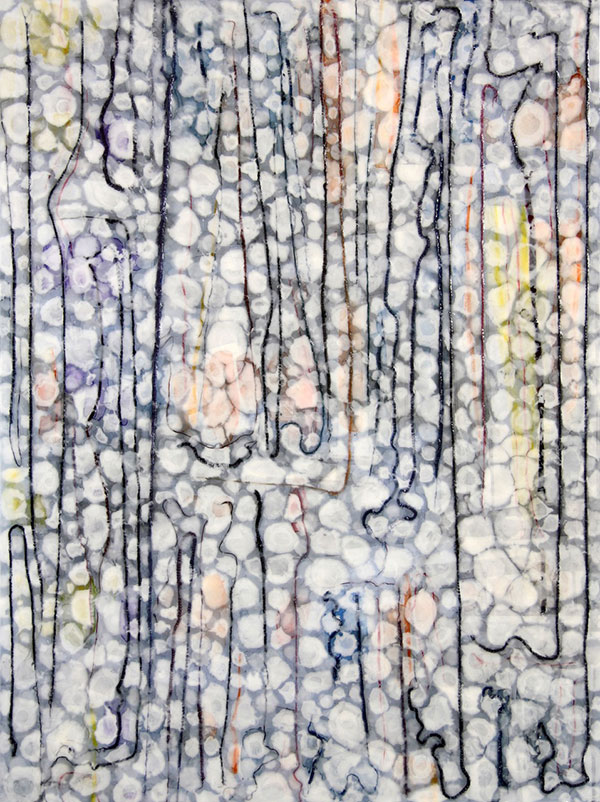 Picasso used to joke that it took him four years to paint like Raphael, but a lifetime to learn to paint like a child. Have you always created abstract pieces, or has that developed over time?
I always knew I was an abstract painter at heart. I can show you my very first oil painting, done at 16. But I always struggled with subject matter, what I was going to paint. And, to me, my abstraction has to come from a story. It comes from a place or an experience that I’ve observed, or a story I’ve heard, or somebody I know. So, I never feel good about a work that I’ve done if it’s purely moving color and shape around. It needs to have a place to come from, an origin.

For better or for worse, in America multiculturalism is often defined by color. Your work is all about the interplay of color. Is this metaphor intended?
In my Blends series, it is intentional. The paintings to me are portraits, but they’re simple until you look closer and you see that there are a lot of layers of color. But the color is very important, because they’re blended together in a way that creates, for me, a new beautiful shape. So, all the colors together are important. Each one has a role to play with the other.

When you say they’re portraits, what does that mean?
That, again, goes to that multiculturalism question. I’ve been, for three years now, collecting stories from friends and acquaintances of their cultural and ethnic backgrounds and compiling them in a book. Those stories, of family experiences or things that would be important to an individual in their family’s cultural background, are very important to the paintings. The paintings, then, are a composite portrait of many people, because they’re blended together, blended histories. 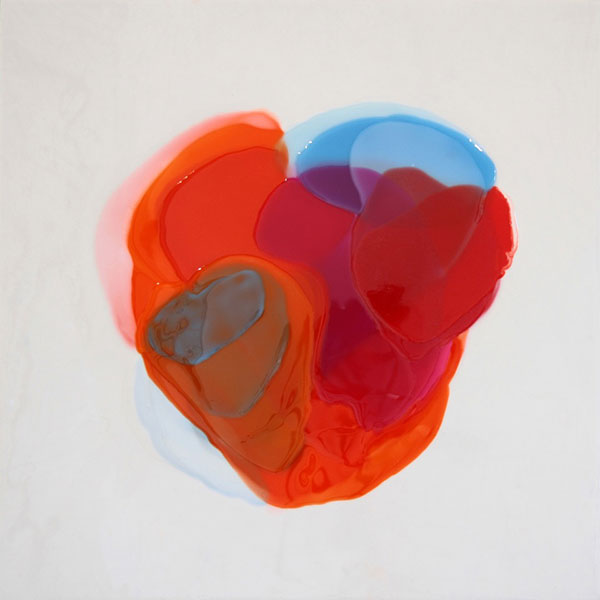 So, tell me a little bit about the story behind this painting [Blend 23md] and how it went from being his or her or their story to becoming that visual abstract portrait you created.
I’m going to read you the story, but I’m going to take out names because I always tell the people sharing the stories that they’ll be anonymous.

I’m half Mexican and half Irish. I lived in Mexico as a kid and moved here for first grade. I was back in Mexico over winter break, and I ran into a woman who had not seen me since I was 5 years old. She watched me speaking with my daughter and wife in English and blinked at me with amazement, saying, “The last time I saw you, you didn’t even know how to speak English.” It was a powerful reminder of how my life has changed since moving here. My daughter is a quarter Mexican, quarter Polish, quarter Irish, and quarter Scottish. When we landed in Minnesota after being away, she saw her breath from the cold and said, “This is what home should look like.” We are having very different childhoods.

That’s an example of the stories that I collect, and I like to exhibit the stories with the paintings.

So then how does that story, which is a lovely and charming and American story, actually become that visual representation?
I might choose a color that the story evokes for me at the moment and then build off that color, playing with complements, usually. Most of the time, I know the person who has written the story. I might know their profile or the way they walk or the way they sit, so shapes kind of get dictated by that. And then I start to play with how those different shapes interact with each other on the panel.

But the shapes are not necessarily representative of the story part for part. I don’t think I need to be that literal, because in the end it’s an abstract portrait and it’s open to interpretation. I think colors portray emotion, colors and shapes have presence, and the interaction is important. Some of the stories have tension, some of them have anger, some of them have sorrow. I don’t necessarily want to portray those things; I really want to create a collection of new images.

You make your pieces with resin, which is unusual. What is your process?
I always start out with one color. The medium I’m working with starts to cure in 45 minutes, it starts to set up, so I have a very quick open time with it. I have to know what I’m doing to control the shapes. It’s still moving when I leave, but the shape that I make is really important to me. Then I let it cure before I do the next color. So I build them up in a series from the back to the top.

Baltimore has a complicated multicultural history. Do you think that that’s likely to, over the course of the years, create an evolution in your work?
I have lived here for a year now, and as an artist, you’re always a little isolated from the place you exist in, because you’re working in your studio. At the same time, I get energy from the place I live in, so I like coming into the city, I like seeing what’s going on, seeing certain people on the street, on the corners every day. It’s just that sort of dynamic place that I enjoy and like to observe, but, as opposed to any other place I’ve lived, I feel like it’s taking a long time and will take longer to understand the city, and I don’t want to make any assumptions.

It’s complicated, and complex.
I wanted to be here. The building itself is cobbled together—it’s old, some of the walls are new, but it’s repaired, you can see things that are screwed down. I painted the floor when I moved in because I needed that sense of serenity, I guess, because my work is complicated, but, as you can see, there are exposed brick walls with remnants of work that’s been done here. I enjoy that; I think that’s important to a place. I like seeing other people’s notes to each other on the wall. Things were made here, which is great to me. I think that Baltimore is a city of people who reinvent themselves, at least in this neighborhood. There’s a creative force, a do-it-yourself mentality here that is vibrant and alive.