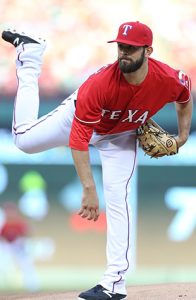 Nick Martinez was drafted by the Texas Rangers in 2011. Top: In June 2015, he met fellow Fordham alumnus Vin Scully, FCRH ’49, in the broadcast booth at Dodger Stadium. Photos by Kelly Gavin/Texas Rangers

When Nick Martinez made his major league debut in 2014, he became the first player out of Fordham to appear in a big-league game since 2001. That’s when 14-year veteran Pete Harnisch, GABELLI ’87, last pitched in the majors.

Texas selected Martinez in the 18th round of the 2011 draft, weeks after he completed his junior year at the Gabelli School of Business. He’s since made 57 appearances on the mound with the Rangers, including 47 starts. Although he’s spent much of this season with the team’s triple-A affiliate, the Rangers recalled him from the minors earlier this month. Tonight he’ll return to the mound in the Bronx to face the Yankees at Yankee Stadium, where he’s pitched well in two previous outings, earning the win in the Rangers’ 15-4 victory on May 23, 2015.

He spoke with FORDHAM magazine Tuesday afternoon, the day before his start.

How different is it for you to come to New York on a road trip, having spent time here while at Fordham?
It’s kind of like a second homecoming. Obviously whenever we play in Florida, and play the Marlins [in Miami], that’s [a homecoming for me too because it’s] where I’m from and grew up playing the game. But having spent three years here in New York, it does feel like home to me, having come to Yankee games when I was at Fordham. I’ve got all my college buddies, a lot of close friends of mine that live here still.

How many people do you have coming out to see you?
Not as many as the first couple of times I pitched here. I just got called up, so it was kind of late notice—flights being so expensive, they couldn’t plan in advance. I’ve got a handful of family and about 10 or 12 college buddies coming to the game.

Your Twitter avatar is a photo of you with Dodgers announcer Vin Scully, FCRH ’49, in 2015. What was it like meeting him?
Oh man, it was awesome. I was awestruck at first. And then once we got talking, I thought it was extremely cool just being able to talk about our campus and our school, and some of the other guys that came before me. He was sharp, naming some of the guys that were on the [Fordham] team currently, and how we just had a couple guys drafted. I just thought it was extremely cool that we had that connection.

Watch a short video of Nick Martinez’s June 2015 meeting with Vin Scully. “We know about you here,” the Dodgers announcer assured him as they chatted in the press box.
He’s been around the majors for generations. Did he have any advice for you?
Yeah, just keep working. Obviously you’ve gotta evolve to stay in this game a long time. You can’t really be complacent. And where you’re at as a player, you always have to want to get better and keep working hard.

When you were in college, it had been a while since a Fordham player had made it to the majors. Was that track record something you were thinking about?
I’ve always had aspirations of being a big-league player. When I was being recruited to play college ball, I didn’t look at what school was going to [give me] a better chance of getting drafted. I just kind of looked at, first, where am I going to get the best education, and secondly, am I going to get a chance to play? And Fordham hit the criteria perfectly. It was a great fit. As soon as I walked on campus, I fell in love with it. I had a shot to start right away, and I was able to play. As long as you’re able to play, you find that exposure. If you’re good enough, someone will find you. I wasn’t too worried about if I was going to get noticed. I wasn’t thinking about the draft. I was more geared toward just working hard and just trying to be the best player I can be.

Is there anywhere you’re looking to go while you’re in New York this week?
You know, I did plan on going to Fordham today, but our game last night ran until about 4 o’clock in the morning with that rain delay, so I had to cancel that. But I did plan to go and say hello to some people on campus, and maybe grab some lunch on Arthur Avenue, but I couldn’t do that today. Maybe next time.

Update (June 30): Martinez started for Texas last night. When he left the game, with two runners on and no outs in the sixth inning, the Rangers led, 6-1, and he seemed destined for his second career win at Yankee Stadium. In the ninth, however, the Yankees mounted a major comeback, scoring six runs and winning the game, 9-7, on a walk-off home run.