skip to main content
Return to Fordham University
You are at:Home»Fordham Magazine»Students Spend an Evening Immersed in a Theatrical Production of James Joyce’s “The Dead”
By Keri Walsh, Ph.D., associate professor of English and director of Fordham’s Institute of Irish Studies
Last month, three students in my Texts and Contexts: Modern Irish Literature course were among the lucky few invited to participate in a dress rehearsal for The Dead, 1904, an immersive theater adaptation of a literary masterpiece.

“The Dead,” the concluding story in James Joyce’s 1914 collection Dubliners, is one of the most beloved and resonant works in Irish literature. It is set in turn-of-the-20th-century Dublin, on a snowy evening at the end of the Christmas season. A married couple, Gabriel and Gretta Conroy, arrive at the home of Kate and Julia Morkan for the sisters’ annual Feast of the Epiphany celebration.

It’s an evening of merriment and melancholy. They dine, dance, hear music, and give toasts. All of those assembled—with the exception of one intoxicated guest and one full of political passion—try their best to suppress their differences in the name of harmony and “Irish hospitality.”

Dublin by Way of the Upper East Side

The dramatization of Joyce’s story, which opened on November 18, takes place at the American Irish Historical Society on Manhattan’s Upper East Side. The society’s stately stone-and-brick Fifth Avenue town house, across the street from the Metropolitan Museum of Art, beautifully evokes the period in which the story is set.

For the dress rehearsal, I joined three of my students: computer science majors Zainab Shaikh and Chenelle Simpson, and environmental science major Lauren Beglin. Seated at the head table alongside the actors, we were served a holiday feast inspired by the one in the story and drawn into the events detailed by Joyce. 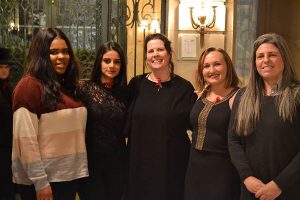 As the evening neared its end, we and several dozen other guests were invited up one flight of stairs to witness the climax of the story: Gabriel and Gretta’s post-party confrontation in a room at the Gresham Hotel. In this scene, staged in a darkened room with only a bed in it, Gretta recalls a lost love of her youth.

Lauren Beglin said the dramatization led her to reconsider the opinion she had formed of the story’s protagonist.

“In my initial reading of ‘The Dead,’ I did not have a very high opinion of Gabriel, especially in his treatment of Gretta in the final scene of the story. Seeing this scene brought to life, however, completely changed my view of him,” she said.

“Instead of a whiny man who could not bear the idea of his wife having a life before him, the actor’s performance recast him as a heartbroken man who loved his wife with all his heart and soul, but would never be able to truly express that to her because of her past, and would never be able to live up to her idea of love. It was a scene that humanized a character I formerly hated and completely changed my experience of ‘The Dead.'”

Chenelle Simpson said the production helped her realize that the characters of Gabriel and Gretta might be based not only on Joyce’s own life but also on the experiences of one of his important literary precursors, William Butler Yeats.

“The story reminded me of [Yeats’ muse] Maude Gonne, who also suffered a loss [that of her child], and how Yeats, like Gabriel, was unable to receive her ideal affection,” Simpson said. “Yeats, being such an inspiration at this time and being only 17 years older than Joyce, could possibly have influenced the characterization of Gabriel.”

Zainab Shaikh found herself impressed by the feats of acting required in immersive theater.

“One of the major lessons I learned was about the art of being in character but also connecting with your audience,” she said. “How can they keep us feeling comfortable? Do we communicate on the basis that it’s 1904 or 2017?

“They gracefully responded to all of our interactions and wove them into a great production. Their hospitality truly immersed me into Joyce’s world, their humor allowed me to loosen up, and the intimacy of the vast set, as paradoxical as that sounds, allowed for one-on-one interactions that seem to be missing from many theatrical shows.”

This year marks the second holiday season in which Dot Dot Productions, in collaboration with the Irish Repertory Theatre and the American Irish Historical Society, is staging Joyce’s story. The Dead, 1904 was adapted by Paul Muldoon and Jean Hanff Korelitz, and it is directed by Ciarán O’Reilly. The production is scheduled to run through January 7.

—Keri Walsh, Ph.D., is an associate professor of English at Fordham and the director of the University’s Institute of Irish Studies. She’s also the editor of Broadview Press’ 2016 edition of Dubliners. In a brief essay posted on the Broadview website, she describes the experience of editing and annotating “Joyce’s first masterpiece,” referring to “The Dead” as her “favorite story to edit, just as it is my favorite to read.”

This story was first published in English Connect, the Fordham English department’s blog.