skip to main content
Return to Fordham University
You are at:Home»Fordham Magazine»Featured Image»80 Years Ago, a College Basketball and Television Milestone
Photo courtesy of Fordham Athletics
In the coming weeks, millions of sports fans will be tuning in to college basketball games across the country as teams compete for conference titles and a spot in the NCAA Tournament. Before March Madness begins, though, college hoops will mark a milestone—one with Fordham at the center.

February 28 is the 80th anniversary of the first live televised college basketball game, a matchup between Fordham and the University of Pittsburgh at Madison Square Garden, then located on Eighth Avenue between 49th and 50th Streets.

Only five months earlier, Fordham had competed in the first live televised broadcast of a football game, defeating Waynesburg College at Randall’s Island Stadium, a victory witnessed by approximately 500 people in the New York region who had tuned in to W2XBS. That experimental station, which later became WNBC, also broadcast the Fordham-Pitt game. Fewer than 1,000 people watched that broadcast, which was part of a doubleheader that also featured a matchup between No. 1-ranked NYU and Georgetown.

North Callahan, FCRH ’72, was working as a marketing executive at NBC in the mid-’80s when he came across some photos and memos about the Fordham-Waynesburg football game and Fordham-Pitt basketball game. After realizing these games were both television firsts, he developed an NBC Sports ad campaign that highlighted the network’s milestone broadcasts. 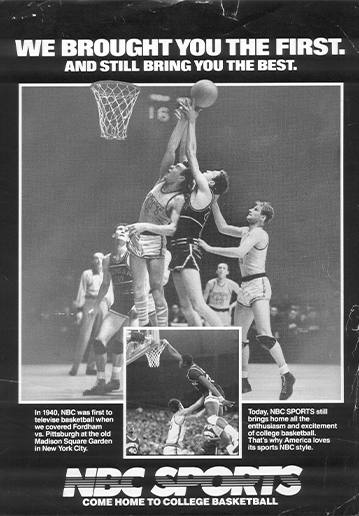 An NBC Sports ad from the mid-1980s referencing the 1940 Fordham-Pitt game.

Although Pitt defeated Fordham, 57-37, in that first televised game, the Rams would go on to finish the 1939–1940 basketball season with a respectable 11-8 record and play in some other memorable games at Madison Square Garden over the years.

During the 1970–1971 season, for example, the Rams played two thrilling contests in the current arena, which had opened in 1968. Head Coach Digger Phelps’ squad beat Notre Dame in front of a sellout Garden crowd of 19,500 on February 18, 1971, and two weeks later, lost to top-ranked Marquette in a sold-out overtime thriller at the arena. The season ended with Fordham advancing to the Sweet 16 round of the NCAA Tournament.

This year, the Fordham men’s and women’s basketball teams currently have overall records of 7-20 and 18-10, respectively. Last season, the women’s team won the Atlantic 10 Championship and earned its third-ever berth in the NCAA Tournament. It was the team’s second trip to the tournament under Head Coach Stephanie Gaitley.