Fordham Theatre alumna Betty Gilpin, FCLC ’08, has once again been nominated for Outstanding Supporting Actress in a Comedy Series for her portrayal of Debbie Eagan in Netflix’s GLOW. The comedy series from the team behind Orange Is the New Black centers on a crew of misfits in 1980s LA who reinvent themselves as the “Gorgeous Ladies of Wrestling.”

In a recent interview with The New York TImes, Gilpin echoed a sentiment she previously shared with graduating Fordham Theatre students in 2016: Embrace the weird.

“We studied a lot of theater of the absurd at Fordham and ‘building your inner ocean of weird’ was the thesis statement,” she told the Times. “Then graduating and auditioning for things like Gossip Girl, where the No. 1 priority is muffling your ocean of weird and curling your hair, I didn’t work for a while because I was bad at both the muffling and the curling.”

This is the third consecutive year in which Gilpin has been nominated for the award; perhaps this third time will be the charm for “weird.”

Dylan McDermott, FCLC ’83, has been nominated for Outstanding Supporting Actor in a Limited Series or Movie for his portrayal of Ernie—the owner of Golden Tip Gas, a service station that doubles as a high-end brothel—in Netflix’s Hollywood. The Fordham Theatre alumnus was last nominated 21 years ago for Outstanding Lead Actor in a Drama Series for his role as Bobby Donnell in ABC’s The Practice.

In the emotional drama, a group of aspiring actors and filmmakers will do virtually anything to realize their showbiz dreams in post-World War II Hollywood.

In May, McDermott told Town & Country that he drew inspiration from real Hollywood greats, his own imagination, and a documentary on Scotty Bowers, on whom Ernie is based.

“I certainly watched the documentary on Scotty Bowers and got useful information out of that,” he said. “I also used Clark Gable as my muse for this role. So, between the information I had from watching great movies from the 1940s, what was in my own imagination, and what was on the pages of the script, it all came together. That’s the great thing about collaboration, whatever comes out can be magical and I certainly feel that’s happened on this show. There’s nothing like this on television, that’s for damn sure.”

Rounding out the alumni nominees, Seena Vali, FCRH ’10, received two nominations this year. The Last Week Tonight with John Oliver writer—along with a team of writers—is nominated for Outstanding Original Music and Lyrics for the song “Eat Sh!t, Bob,” featured on episode 629, and for Outstanding Writing for a Variety Series.

Vali, who studied mathematics and music while attending Fordham, previously took home Emmys for Outstanding Writing in a Variety Series in 2018 and 2019. 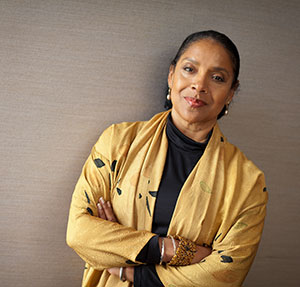 Tony Award-winning actress Phylicia Rashad, a former Denzel Washington Chair in Theatre at Fordham, has been nominated for Outstanding Guest Actress in a Drama Series for her work on NBC’s This Is Us. Rashad was the first person to hold the Fordham position, established in 2011 thanks to a $2 million gift from Washington, FCLC ’77.

Perhaps best known as “America’s Mom” for her role on The Cosby Show, Rashad portrays Carol “Mamma C” Clarke, mother of Beth Pearson (Susan Kelechi Watson). Referencing a scene the two actresses share, Watson told The Los Angeles Times: “I will say, there’s this amazing moment between when Mamma C and Beth where Beth says to her, ‘I’m strong because of you.’ And in that moment, I felt more of a Susan-Phylicia thing. I’ve always looked up to her path and what she’s gone through and come through as an artist, as a woman … and continuing to go through, because she’s not stopping any time soon.”

This is the second consecutive year that Rashad has been nominated in this category. She previously received Lead Actress nods in 1985, 1986, and 2008.