skip to main content
Return to Fordham University
You are at:Home»Fordham Magazine»20 in Their 20s: Kateri Woody
Kateri Woody, GSAS ’12, near the Marvel offices in New York City (Photo by Allison Stock)

Kateri Woody had dreamed of getting her name in a comic book since she was 13. Now an associate managing editor for special projects at Marvel Entertainment, she has her name in so many she can’t count.

“As soon as I realized I would be going to school in New York and that Marvel was here, I applied to their internship program,” Woody says. She was particularly drawn to Marvel comics because “the stories are based in our world,” she says, “so everything happens in places we recognize.”

She finally landed the much-coveted internship during her second year in Fordham’s master’s degree program in English, and it launched her publishing career. After graduating, Woody went on to join Oxford University Press.

“I always told my boss at Oxford that the only reason I would leave is if Marvel wanted me back full time,” she says. After almost four years, that’s exactly what happened.

Now she is completely immersed in the world of Marvel. Her favorite character, Marvel’s Captain America, is tattooed on her right forearm. “He’s always resonated with me, especially because of the World War II connection,” Woody says. “My grandfather was a paratrooper, and I would hear his war stories and then see the echoes in the Captain America stories.” 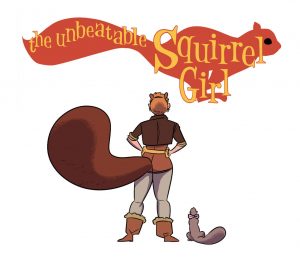 A close second is the lesser-known Squirrel Girl, who had made appearances in previous series but got her own in 2015. “She’s vibrant, she’s funny, and she’s different,” Woody says. “A lot of heroes have identity crises because they’re putting on a mask and being someone else. But Squirrel Girl, or Doreen, knows who she is. She’s not burdened by that.” Plus, Woody says, “She’s the Unbeatable Squirrel Girl.”

Woody’s time at Fordham also gave her a new hero outside the Marvel canon: Benjamin Franklin. “I think about my Benjamin Franklin class a lot,” she says, somewhat surprised at herself. “I’m not really sure why. I guess because he was this industrious, self-made man who revolutionized the world in many ways. But he was funny too.

“And he believed that if you want to have leisure time, you have to put in the work. That’s really stuck with me.”