skip to main content
Return to Fordham University
You are at:Home»Education and Social Services»School Ties in the Bronx: Fordham and Cardinal Hayes High School
Multimedia by Taylor Ha and Tom Stoelker
Less than four miles away from Fordham’s Rose Hill campus is Cardinal Hayes High School, an independent all-boys Catholic school. Since its inception in 1941, it has produced more than 29,000 alumni, many of whom have gone on to prestigious universities and become successful figures in their fields.

Many students at Hayes—as the school is known—are potentially the first in their families to attend college. Most are Hispanic and African-American, and many come from single-parent homes in the South Bronx whose families struggle financially, said the school’s principal, William Lessa.

Four years ago, Fordham developed a partnership with Hayes that began with a mentoring program and has expanded to include work with WFUV, the Gabelli School of Business, the Graduate School of Education, and Fordham-based Jesuits. The collaboration has evolved into a symbiotic relationship between two schools that share similar missions and values, said staff from both institutions.

“Our partnership with Cardinal Hayes is a critical one,” said Joseph M. McShane, S.J., president of Fordham. “Students cannot aspire to a life they do not know exists, and they cannot achieve that life unless they are taught that it belongs within their grasp. If that were the only reason for the partnership, it would be enough. But engagement with the Hayes students, their families, and their community also enriches Fordham. We are wiser, better grounded in the lives of our neighbors, and the beneficiary of great talents that would otherwise go untapped, were it not for this partnership.”

The ties between the two schools have given Fordham students a window into what life in the South Bronx looks like, said Roxanne De La Torre, FCRH ’09, GRE ’11, director of campus and community leadership for Fordham’s Center for Community Engaged Learning.

And for many young men at Hayes, exposure to Fordham’s staff and students has broadened their horizons and opened doors.

“Our kids are fascinated by them … They have no idea who lives out there,” said Lessa, adding that the partnership is also important to his students’ families. “I think our parents have decided to invest a considerable amount of money into their sons’ education in the hopes that they’ll be the first person in their homes to go onto college. Education is transformational and can be a change agent in their lives.”

“Although [the Hayes students are]  tired from a full day of classes, they attend Period 9 so they can get that extra help they need in a particular subject,” said Emily Padilla-Bradley, the school’s dean of studies. “Throughout the years, I’ve realized that the students have learned to appreciate, more and more, the help from the tutors from Fordham.”

One of those tutors is Manuel DeMatos, a Fordham College at Rose Hill senior who will be studying adolescent education at the Graduate School of Education next year.

“Just knowing that you’re having a positive impact and that these kids are improving their potential life—not just in high school, but into the future—is super rewarding,” said DeMatos, who wants to become a high school social studies and French teacher.

The Cardinal Hayes students in Period 9 are an eclectic bunch. There’s Calvin Lanier, a junior who plays football. There’s Leonel Nepomuceno, a senior who sings in the school choir and loves animals—including his three pets, Hailey the miniature poodle, Joshua the orange tabby cat, and Rango the turtle—so much that he’s considering studying veterinary science in college. Then there’s Albert Alexander Almanzar, a self-described class clown who often played around instead of focusing on his studies. But his years at Hayes—and a Fordham student named Thomas Bradley—changed him, he said.

Almanzar called Bradley, a student at the Gabelli School of Business, “the best tutor.”

“[He] gives me more motivation to want to do better in my classes because it shows me somebody that cares,” Almanzar said of Bradley, who tutored him in U.S. history and writing. “All day in school, people show that they care. But somebody that’s a little younger, I feel like I could relate to more… that means more to me.”

Finding A Passion for Public Radio

For the past three years, members of WFUV, Fordham’s public radio station, have paid an annual visit to Cardinal Hayes and, in a conversation with the entire junior class, shared what the students can learn at the station.

“There is this station that is right within their borough, within the University, that offers the kind of opportunities that they’re not going to find at other colleges and universities across the United States,” said Chuck Singleton, general manager at WFUV, which is ranked among the top 20 college radio stations by the Princeton Review.

Those visits have led to three paid internships for Hayes students, including Ramon Liriano, a senior who worked in the sports department last summer. Like many of his high school peers, he’s potentially the first in his family to complete a college degree. Thanks to his internship at WFUV, he said, he’s also discovered a potential career in sports broadcasting.

“I’ve seen my family struggle, especially my mother, who works two jobs [as a housekeeper]. I’ve seen her come home looking tired, especially late at night—sometimes, 1 or 2 o’clock in the morning,” said Liriano. “She’s put me in a Catholic school, pushed me to become better than what she has done in her life … I want to take this opportunity to study something really good in the world that can help provide for my family.”

Last year, a dozen Hayes honors upperclassmen took a corporate communications course through the Gabelli School of Business. From fall to spring, they learned how to deliver the perfect personal elevator pitch and put together an engaging presentation. They analyzed a Fortune 500 company that experienced a diversity-related crisis, like Starbucks, and presented a new diversity plan to their classmates. But perhaps most importantly, they learned how to become better communicators. 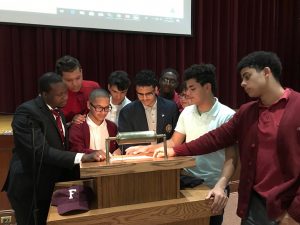 Clarence Ball and the first cohort of Hayes students delivering their end-of-the-year presentations at the high school on May 15, 2019. Photo courtesy of Julie Fissinger

“The difference in how the students presented their work in class, how confident they were in their verbal responses, how confident they became in their social circles, all based on the communication competencies they learned in class … that, to me, was the most rewarding thing,” said Clarence Ball, lecturer and interim director of diversity, equity, and inclusion at the Gabelli School of Business, who teaches the course at Cardinal Hayes.

Five students from the initial cohort of Ball’s course are now first-year students at Fordham, including the 2019 Hayes valedictorian, Andy Lin.

Lin described himself as a shy student, who, as a high school freshman, used to read his speeches word-for-word from a piece of paper. Instead of making direct eye contact during presentations, he would look down. But by the end of Ball’s program, he saw a huge change in himself.

“Before I went up on stage to give my [valedictorian]  speech, I did the exercises that Professor Ball always had us do,” said Lin, now a first-year Fordham College at Lincoln Center student who plans on studying computer science. “I messed up a few words here and there, but I was able to recompose myself and keep moving on.”

These relationships that Fordham professors and students are fostering in the community are something the University hopes to build on, said Michael C. McCarthy, S.J., vice president for mission integration and planning, who helped found the Center for Community Engaged Learning. Using its Hayes relationship as a model, Fordham is now working on a similar partnership with Aquinas High School, an all-girls Catholic high school in the Belmont section of the Bronx.

“My hope is that our partnership with Cardinal Hayes is one of many such partnerships with institutions in the Bronx, where students can engage their community more effectively,” said Father McCarthy. “We want to help faculty leaders to connect with community leaders to build up student leaders.”

Trading Teachers Across the Bronx

Several Hayes teachers have studied at the Graduate School of Education, thanks to the support of a Fordham scholarship that almost halves tuition costs for full-time professionals in faith-based non-public schools, said principal William Lessa.

And in the past three years, three Fordham-based Jesuit scholastics have volunteered at Cardinal Hayes. These young Jesuits who have just finished novitiate are deepening their faith through local community service, said Joseph O’Keefe, S.J., GSAS ’80, a current scholar in residence at the Graduate School of Education and Fordham trustee who was just chosen to lead the new USA East Jesuit province.

“The idea is to work in the Bronx community and to reflect on that as part of their preparation to become priests,” Father O’Keefe said.

“They’re there to help. But they also learn from people’s experiences,” said Father O’Keefe.

An Alumnus from Both Schools

At the heart of the partnership between the two schools is Donald Almeida, Fordham trustee and retired vice chairman of PwC.

Almeida, who grew up in Yonkers, New York, is a ’69 Hayes and ’73 Fordham alumnus who now serves on the boards at both schools. Over the past several years, he has spearheaded the partnership between his two alma maters and, with his wife, supported many students—including young men who have experienced homelessness.

Among his mentees is a Hayes student whom Almeida chose not to identify by name. The student plays basketball so well that he will likely receive many Division I offers, said Almeida, who has attended his sports games and cheered him on from the sidelines. He’s also occasionally taken the student and his mother out to dinner.

A while back, Almeida learned that the student was considering leaving Hayes and attending a prep school, in hopes of being recruited by better college sports teams. But Almeida said he was more focused on getting the student into the best academic college program.

Almeida recalled the day he sat in his Rhode Island home, gazing at the ocean, when his cell phone rang. It was the student’s father. For two hours, they debated whether or not the student should stay at Hayes.

“Thirty seconds after I hung up the phone with his father, [the student]  calls me to tell me he’s staying at Hayes,” said Almeida, noting that the student is not the only one benefitting from their relationship. “The more you impact their lives, the more satisfaction you get.”