skip to main content
Return to Fordham University
You are at:Home»Education and Social Services»Pushing Professors to Rethink their Role in Graduate School

The numbers tell us that graduate school is in real trouble. Too many students take longer to finish PhDs than they should, and when they finally earn their degree, the job market they face is far from what they expected.

Leonard Cassuto, professor of English, is determined to change it.

In his new book The Graduate School Mess: What Caused it and How We can Fix it (Harvard University Press, 2015), Cassuto beseeches his fellow faculty to (perhaps paradoxically) present their students with viable role models in the workplace other than themselves.

Cassuto presents some alarming statistics. In a hypothetical group of 10 students entering a doctoral program in the arts and sciences today, 5 will drop out, an attrition rate of 50%. Half of those non-completers—25% of the whole—will leave soon after entering, which is, said Cassuto, a reasonable outcome: “doctoral study isn’t for everyone. Some people try it and decide to take the master’s degree and do something else.” But another 25% of that original cohort will drop out only after they’ve spent many years in the program—and that number, says Cassuto, needs to be lowered. 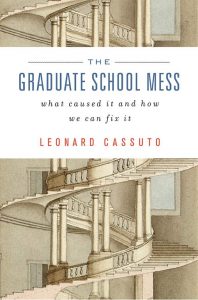 Of the five who do finish, Cassuto noted that, first of all, their average time to degree will range from seven years (in the sciences) to nine (in the humanities). Then, after all those years, only about half of them will get jobs as a college professors, and most at colleges and universities that place a higher premium on teaching than on research.

“If I described to you a workplace that people have to train for nine years to get into, where at the end of all that time, half of them will be gone, half of those who remain won’t get a job in that workplace at all, and the remaining quarter are going to find themselves facing a range of possible jobs that doesn’t reflect a reality that they’ve been taught to expect, what would you say about a workplace like that? You might call it laughable and ridiculous, and yet this is the workplace we run,” he said.

Cassuto, who writes a column called “The Graduate Adviser” for the Chronicle of Higher Education, blames “research chauvinism,” in which professors tend to place a higher premium on their own positions at research universities while giving short shrift to other career possibilities.

“If a graduate student hits the market with the expectation that he or she will only be truly fulfilled by a research-centered job and then confronts a market where—even if you succeed in getting a tenure-track job—it’s not likely to meet that expectation, that student will not be happy,” he said. “Teaching students to think that way is not just unethical. It’s immoral.”

In fact, he said that preliminary research indicates that students who earn PhDs in the humanities often have successful and satisfying careers in an array of other fields. They just have to get past the initial feeling of failure, because they never grabbed the “brass ring” of a professor job.

“One businessman I talked to for my book who likes to hire PhDs said they’ve got a great skill set that someone else paid for, Cassuto said. “He’s happy to hire them; they move up very fast and do very well.”

Aside from the moral imperative of helping students fulfill the potential of their degrees, Cassuto said professors should broaden their horizons as a matter of survival. Like it or not, the American public is skeptical of how much “use value” lies in a graduate degree today.

“If we want our enterprise to survive and thrive in the decades to come, we’d better broaden our hearts and minds and teach our students to broaden theirs. Otherwise, we’re going to be fighting off discontented graduates and a discontented public, and who wants that?”