Both women teach full time at the Graduate School of Education (GSE) and have deep family roots on the island. Gonzalez, a native of the Bronx and clinical assistant professor in the college’s Division of Educational Leadership, Administration and Policy, has been visiting her family in the city of Ponce every summer since she was in kindergarten. She spent several years there as an exchange student while earning a bachelor’s degree at Lehman College. 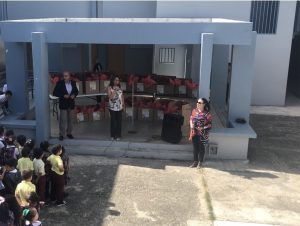 Nevárez-La Torre, an associate professor of in the Division of Curriculum and Teaching, was born and raised on the island. Although she moved to the mainland when she was 25, her family still lives the town of Guaynabo and some still live in the town of Lares, in the mountainous northeast region.

A Connection to Fordham

They have professional connections as well: When González earned her doctorate in 2016, her dissertation was on public school leadership in Puerto Rico. One of the people she has stayed in touch with is Isaac Ruiz Solá, Ph.D., the principal of Escuela Julio Alvarado Tricoche, an elementary school in Ponce. When she reached out to him after the storm, his response was “We need everything.”

“So, we said, ‘Let’s take something off your plate.’ School supplies are really hard to come by in Puerto Rico schools. Most teachers have to pay for the supplies for their classroom,” said González.

“Parents are not going to think about buying school supplies when they need food, water, and gas for their generators.” 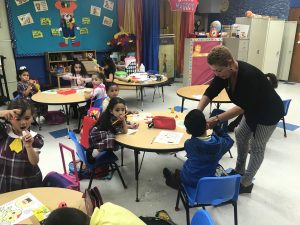 The two reached out to their GSE colleagues and raised nearly $2,000, which they used to buy notebooks, pencils, crayons, scissors, construction paper, and other assorted school supplies.

On January 10, the day after Escuela Julio Alvarado Tricoche reopened for the first time since the storm had hit, they presented 16 festively decorated boxes of supplies-one for each class-to the students. More than three months had passed since the storm hit, and residents were still struggling to put their lives back together. But the school staff still staged a catered ceremony to mark the occasion.

“The staff was traumatized on their own, but I have to tell you I’ve never seen a group of people come together and selflessly put aside their own traumas and their own suffering to help the kids have a sense of a normal, joyful school,” said Nevárez-La Torre.

“They dressed up as clowns, they brought in music, and they danced with the kids. It was amazing.”

To the women, the ceremony was every bit as important as the act of giving material goods, because they were able to show their solidarity with the students and fellow teachers. Nevárez-La Torre viewed it as an extension of her professional work.

“Being a scholar in education is not just conducting research to benefit others through scholarly publications. It’s also making a difference in the lives of the people that we work with,” she said.

González noted that education is a field where relationships are key.

“We always say that students don’t learn from people who they feel don’t care about them,” she said.

“School supplies don’t fix a house, school supplies won’t put food on your table, but they are a gesture of a human kindness that we can express by standing side-by-side with you.”

Nevárez-La Torre and González plan to continue spearheading aid efforts, as the island is still in dire need of aid. Power outages are still common, and a recent report indicated that more than 10,000 small businesses-nearly 20 percent of the island’s total-were closed as of March 6.

“I don’t know that school supplies again will be the way,” said González. “We need to talk a little bit more with school principal and teachers and find out what would be the most helpful means of support, and then we can help them.”