Neuroscience has made great strides in the biology of trauma. Today clinicians understand that traumatic events cause structural changes in the brain that can lead to debilitating conditions such as post-traumatic stress disorder. Fortunately, treatment can help to reduce the psychological and physiological effects of trauma and help victims to move on with their lives.

But what if the trauma is not a one-time event? What if a person’s entire world is filled with adversity, flooding her with constant stress and anxiety and preventing her brain from ever recovering?

This the challenge that underlies the treatment of complex, or chronic, trauma, says Amelio D’Onofrio, Ph.D., a clinical professor and director of the Psychological Services Institute in the Graduate School of Education (GSE). 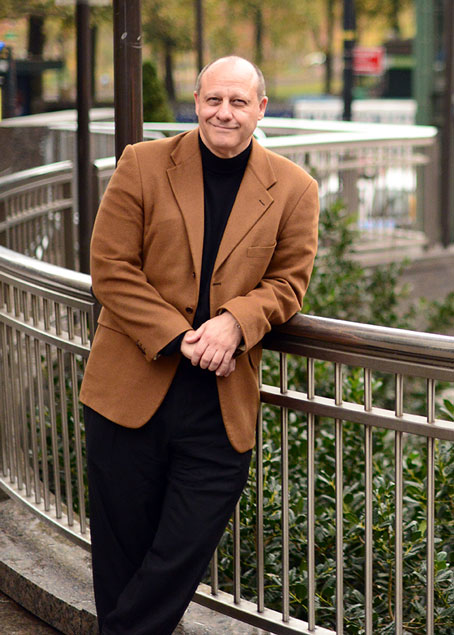 Psychologist Amelio D’Onofrio is head of the project Structured Interventions Program for Inner City Students and Parents Exposed to Chronic Stress — known in the schools as Fordham CARES, or, Cultivating Awareness and Resilience to Empower Students.
(Photo by Joanna Mercuri)

In general, a traumatic experience is one that is so distressing that it overwhelms the brain’s ability to process the event and triggers a set of survival-oriented physiological and psychological responses. Acute trauma refers to a singular event such as a car accident, an assault, or a natural disaster. Complex trauma, though, is more pervasive.

“For instance, if a parent chronically abuses substances and cannot meet a child’s basic needs, that is a traumatic environment for the child. Or if there is violence in the home or in the neighborhood and kids are constantly trying to protect themselves, that is traumatic,” said D’Onofrio, who is also a practicing psychotherapist.

“We expect kids to focus on doing schoolwork and solving complex problems, but they’re so worried about self-protection that their nervous systems have been activated to the point that they can’t focus.”

This year D’Onofrio received a $311,000 grant from the Department of Health and Human Services to design an intervention program for inner-city students who have experienced complex trauma and who otherwise would not be able to receive specialized psychological services.

The grant-funded program, which was implemented in two Bronx middle schools this fall, is divided into ten-week increments over the course of two years. For each set of ten weeks, doctoral students from GSE’s counseling and counseling psychology program run structured group treatment with at-risk students. The team also meets with each student individually at least twice and meets with parents to educate them on the effects of trauma and how it impacts their children.

The goal is to help students start to understand the impact of stressful and traumatic environments and to teach them healthy coping skills so that they will be less likely to turn to gangs or drugs.

“We worked closely with GSE’s Center for Educational Partnerships to select the two schools. One of the schools is serving many recent immigrants from all over the world, and the other school recently had a gang-related stabbing,” D’Onofrio said, referring to an incident this summer in which a 14-year-old student stabbed and killed another student outside their middle school.

“We expect kids to focus on doing schoolwork and solving complex problems, but they’re so worried about self-protection that their nervous systems have been activated to the point that they can’t focus.”
“Maybe we can’t undo the trauma in ten weeks, but we can start the process and help show the students that there is more than they realize to their struggles… and that what they’re going through is not their fault, but is a consequence of trying to learn to adapt to a really awful situation.”

D’Onofrio hopes to later develop internships and externships in the schools so that Fordham counseling students can continue working with the middle school students once their ten sessions come to an end.

“I think this a powerful interface between a Jesuit university and the community, a way of giving back and working toward social justice,” he said.