skip to main content
Return to Fordham University
You are at:Home»Education and Social Services»Professor Examines Plight of Mothers of Difficult Adult Children

Although we all know that mothering doesn’t stop when a child turns 18, Judith Smith, Ph.D. an associate professor at the Graduate School of Social Services, has written a new book about how problems in adult children can impact the psychological, financial, and physical health of their older mothers.

Smith’s work began with a small qualitative research project. She was aware of the absence of academic or popular books on the topic and wanted to learn how women over the age of 60 were affected by the problems in their adult children’s lives. To recruit subjects for her study, she first went to senior centers in New York City.

“I asked, ‘Who in the audience is a parent?’ and nearly everybody joyfully raised their hands, and when I asked for the problems when the kids were 1 to 3, people said food, eating, and sharing. I said ‘How about when they were teenagers?’ They said things like drugs. Everybody was very boisterous,” she said.

“And then I said, ‘How about the problems with your kids when they’re 40?’ And the room got quiet. A few people said drugs, divorce, unemployment.”

Smith established a rapport with some of those who spoke up and set up in-depth interviews with them. Each person was interviewed for two ninety-minute sessions. In all, she interviewed over 50 women.

She coined the term “difficult adult child” after listening to the women share stories of how their child’s chronic unemployment, mental illness, or substance abuse created difficult or impossible choices for them. Half of the mothers were poor and half were women of color; none had expected to be in the role of the parent in their later years. They struggled with the conflict of whose needs should take precedence—theirs or their child’s, Smith said. 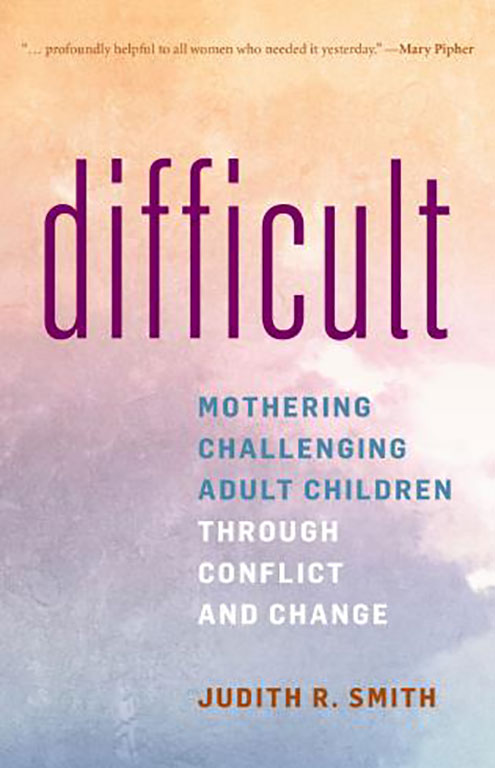 The book—which was featured in a New York Times opinion piece on Feb. 16—is divided into three parts. The first presents the personal conflicts that the women experience as they attempt to protect their adult child while also meeting their own health and personal needs, which can be difficult and costly for women when they are 60, 70, or 80 years old.

The second part introduces the Stages of Change model developed by psychologists Prochaska, DiClemente, and Norcross to help readers consider taking small steps towards change. The final section provides examples of how some mothers with difficult adult children were able to help themselves by getting social support, engaging in self-care, learning to stay safe, and helping their adult child. There is a detailed appendix with resources for mothers to access services for themselves as well as for their adult children.

She focused exclusively on mothers because in most cases, they were the ones who shouldered the burden of caring for the adult children. One mother she profiled said that her husband was very supportive of her efforts to care for their daughter, who had her first psychic break at 22 years. But while he seemed to be able to cope with the stress and live a somewhat normal life, she confessed that the burden made her feel like she had been “bleeding inside these past 40 years.”

“For 25 years, she’d been moving her daughter from apartment to apartment. They were able to afford to put her into separate apartments, but she would get crazy and destroy it. She had moved her 21 times in 20 years,” she said.

Researching the book caused Smith to reassess her own perspective on the issue. She said she came to see that this problem not only affects families on a day-to-day basis but is also the manifestation of a larger structural problem. Mothers with difficult adult children are trying to shoulder the gaps left by a broken mental health system and insufficient substance abuse treatment centers.

“We closed all the psychiatric hospitals in the 1960s, and the federal plan was to create community health centers, low-income housing, and job training so that persons with serious mental illness could live in the community. It didn’t happen. What ended up happening is we lost the terrible asylum-like institutions, but these were not replaced with the promised community-based treatment centers. Supportive housing for vulnerable adults never materialized at the rate that was needed. The mothers I interviewed each told me that they felt they could not turn their backs on their children. They would become homeless. Each in their own way said, ‘If not me, who?’”

Smith hopes the book will help these parents realize that they are not alone. According to a report by the National Alliance of Caregiving, there are 8.5 million people in the U.S. who are taking care of a relative with a mental health condition, most of them adult children who are living with their older parents and financially dependent. There are also an estimated 20 million people who have a substance use disorder (alcohol or drugs), and their families are also affected. Too many mothers, she said, blame themselves for their adult children’s problems, feel ashamed, and then do not reach out for help.

She also hopes that giving a name to the problem—difficult adult child—will help these parents ask for help. Naming a personal problem as a social problem is the first step to getting needed recognition and services, she said, noting that it was only when domestic violence, child abuse, and elder abuse were named that attention to these problems occurred in health care, the law, and government social policies.

“There is a real benefit to being able to say ‘I have a difficult adult child,’ rather than having to say, ‘My son is an addict,’ or ‘My daughter has schizophrenia,’” she said.

“If something is difficult, there are ways to make it more manageable. Mothers can not cure mental illness or substance use disorder. But they might be able to get help for themselves to minimize the burden and stress that caring for them on their own can bring.“