skip to main content
Return to Fordham University
You are at:Home»Education and Social Services»Professor Calls for Bilingual Education Services to Go Beyond English Instruction

Imagine if very suddenly your family were to relocate to another country—a country you’ve never visited and whose language you don’t speak.

Now imagine that you are 9 years old and you need to start school in this new country. You’ve always loved learning, but you quickly realize that now you can’t even follow what the teacher is saying or ask a classmate for help. Chances are you won’t excel this school year. You wonder if you’ll ever catch up.

BELOW: Watch an interview with Diane Rodriguez
Millions of immigrant students in the United States face this situation—yet, the language difference is just the beginning of the problem, said Diane Rodriguez, PhD.

An associate professor at the Graduate School of Education and a longtime bilingual education instructor, Rodriguez tells her graduate students that much more than learning English is needed to help immigrant children thrive in the American education system. These students need a comprehensive and individualized educational plan to help them acclimate to their new learning environment, as well as to their new home’s culture.

“For students to thrive academically, it’s not only about language, but also about culture,” said Rodriguez, who is a Fordham alumna. “It’s about understanding who these children are and the community they come from, why they are here, and what they expect of—and hope for—in their education.”

Biography-driven instruction: learning who our students are 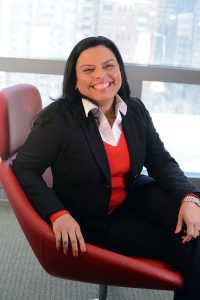 Rodriguez advocates for an approach that combines biography-driven instruction with use of children’s native language, which she says is critical for cognitive and emotional growth. She offers a native language instructional model in her recent co-authored book, The Bilingual Advantage: Promoting Academic Development, Biliteracy, and Native Language in the Classroom (Teachers College Press, 2014).

To a teacher who is not versed in this model, non English-speaking students may appear to be fundamentally limited in English proficiency. Rodriguez, however, considers these students to be “language enriched pupils” who are able to draw on their native language while learning English and content knowledge. When teachers utilize the strengths that these students have already acquired through this enriched sociocultural and linguistic background, the students do better.

To access these strengths, though, teachers must first identify them. Many bilingual education teachers are already employing biography-driven instruction, Rodriguez said, For instance, she knows teachers who create biography cards for each student that list useful tidbits such as family information, first and second language proficiency, reading and writing levels in both languages, and cognitive abilities.

This is a good start, she said. But if teachers are to truly empower their culturally and linguistically diverse students, there is more important information yet to capture.

“We need to identify students’ individual learning styles—what motivates them, what makes them laugh,” she said. “It’s about embracing all of the cultural knowledge and awareness that they bring into the classroom.

“When you get to know your students, you’re able to develop and modify instruction for your group of students,” she continued. “It takes time—you have to put an effort in as an educator to get to know your audience.”

In addition to making bilingual instruction more effective, Rodriguez studies the impact that cultural and linguistic diversity have on special education. Her interest in this area began while she was teaching special education in New York City. She noticed that a number of her immigrant students had been diagnosed with learning disabilities when, in fact, they were merely struggling to learn English.

“Nelson Mandela once said that when you speak in a language that someone understands it goes to his head, but when you speak in his native language, it goes into his heart. That’s what happens for many of the children who are acquiring a second language in this country.”
Over time, she realized that many teachers were in need of more nuanced training when it came to the intersection of bilingual education and special education.

To that end, Rodriguez recently directed the Bilingual Special Education Summer Institute at Fordham to provide additional training to educators involved in both special education instruction and bilingual services—a dual service needed by as much as 22 percent of New York City students.

The institute attracted more than 150 participants to Fordham’s Lincoln Center campus. Over the course of a week, the teachers were immersed in the latest research and methodologies for teaching English language learners with special needs, especially in light of the diversity of cultures, languages, abilities, and socioeconomic statuses of these students.

“All of these factors are integrated, and you have to take all of them into consideration when you’re developing an educational plan for a child,” Rodriguez said.

Watch an interview with Diane Rodriguez