skip to main content
Return to Fordham University
You are at:Home»Education and Social Services»Panel to Tackle Issues of Race in Education
Luis Torres, Pamela Lewis, Arthur Goldstein, and Kaliris Salas-Ramirez will be among those participating in the discussion on Feb. 21.
What do you do with a problem like school segregation?

Public school teacher Aixa Rodriguez, FCRH ‘00, GSE ’05, attended a panel discussion devoted to the topic in Manhattan last fall and came away “incredibly frustrated” by the fact that the Bronx was absent from the discussion.

So Rodriguez, an ESL teacher at Fannie Lou Hamer High School in the Bronx, organized her own discussion, “Race and Public Education in NYC: A Town Hall.”

The event will take place Tuesday, Feb. 21 from 7 – 9 p.m. in the Flom Auditorium, William D. Walsh Family Library, on the Rose Hill campus. It will be moderated by Mark Naison, Ph.D., professor of history and African American studies. The panel will feature:

Luis E. Torres, principal of P.S. 55 in Claremont Village in the Bronx;

Ruth Rodriguez, former teacher, mother, and administrator for United Opt Out National; and 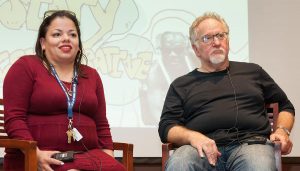 Aixa Rodriguez and Mark Naison at an event at Rose Hill in October.

Rodriguez said a gathering of local stakeholders is especially important now because 32 of the of the 62 schools that the State of New York is considering closing are located in the Bronx. The panelists also have direct connections to schools (a “dog in the fight,” she said) either as administrators, parents, or teachers.

“None of us have really had a chance to explore this up until now, because a lot of these programs have put limits on time to speak, or there weren’t a wide variety of opinions, or the audience wasn’t involved,” she said.

One of her biggest critiques of the current conversations about school segregation is that it’s often a binary one, pitting the needs of black students against white students. Latino students are considered after the fact, and Asian students are left out of the picture altogether, she said. The face of bilingual education is going to have to change.

The biggest hurdle, however, is simply “getting people to accept that segregation is real,”and that it’s exacerbated by the fact that housing and schools are deeply intertwined. Because New Yorkers have to pay more to live in neighborhoods with good schools, they’re resistant to any changes that might alter the demographics of those schools.

“People want to feel good about themselves so they tell themselves a myth, and they don’t want to admit that they have preconceived notions. The legacy of redlining is one cause for segregation, but attaching the quality of a local school to the cost of local housing is another reason,” she said. “It just reinforces who wants to live where.”

For more information or to RSVP visit the event’s Facebook page.