skip to main content
Return to Fordham University
You are at:Home»Education and Social Services»Medievalists at Vanguard of Digital Humanities 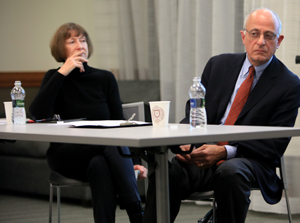 Can 21st-century humanities still perform its age-old task of interpreting the past for the present age?

A group of devoted humanists gathered at Fordham’s Rose Hill campus on Dec. 7 to move that and other questions on liberal arts forward.

The occasion, the last of the Medieval Studies’ Fall Lecture series, was co-sponsored with the Digital Humanities Working Group and featured two of Fordham’s alumni to lead a discussion on “Digital Humanities: Issues and Debates.”

Musto asked a series of questions on the definition of humanities: Is it a group of departmental specialties, an approach to knowledge and human experience? Or, do humanities’ concentrations in grammar, knowledge, and logic act as a springboard for study in broader fields?

Digital humanities, said Musto, a field that combines traditional scholarly methodologies with tools provided by computing, may hold the key to keeping humanities relevant in the 21st century.

The use of computer-assisted research among medievalists might face some resistance within their field, said Musto. But, if anything (as most in the audience agreed), the medievalists are at the vanguard among humanists in pushing digital humanities forward.

Gardiner said that, unlike early 20th-century historians, medievalists have a prescribed body of material that is far less unwieldy to manage digitally.

“You can actually imagine digitizing the lives of medieval saints because the subject has its boundaries,” said Gardiner.

Musto said that those restrictive objects that medievalists study, such as books, have a very prescribed approach: text, margins, covers, pagination, etc.

“As medievalists we’re used to the idea of the book being extremely fluid, the book itself is a process—not an industrial product—and that outlook among medievalists lends itself to saying ‘Ah, here’s this very interesting digital process’,” said Musto.

“Digital is also a process and not a product and I think that has attracted a lot of medievalists who are used to the notion of impermanence, and the lack of authority over a single edition.”

Of course, there are detractors. Musto quoted from a January 2012 blog piece in The New York Times by Stanley Fish. After noting the irony of writing criticism of digital humanities in a blog, Fish expressed a concern that despite democratic access to information, there is still a need for the structure.

Still, despite these opportunities, she cautioned that new tools might tempt researchers to “broaden [their]questions, materials and research agendas in ways that may develop beyond our control.”

Despite the advances, many kinks need to be worked out—from funding mechanisms, to the role of the academy, to the technology itself.

Michael Vargas, Ph.D., GSAS ’06 said that some of the challenges he faced in building an open source database for his research on fourth century Dominican Order of Preachers included funding (which dissipated after the 2008 financial crisis), technical challenges, and resistance from scholars who do not recognize digital work in the same manner as work published in peer-reviewed journals.

Musto said that, as an author, one doesn’t need to know how to bind a book; it’s the same with technology.

“What we need are digital publishers who understand the humanities,” he said.

New technology also allows scholars to create their own books and archives, without the infrastructure of the academy. But, ultimately, the research on a floppy disc may suffer the same fate as a crumbling medieval manuscript.