skip to main content
Return to Fordham University
You are at:Home»Education and Social Services»Justice and Equality in America’s Schools to be Addressed at Lecture

To address the inequality in America’s schools, educational leaders should reach beyond the watered-down notions of “social justice” gaining currency today and recapture the concept’s original revolutionary spirit, says a scholar who will speak at Fordham on Wednesday, Dec. 10. 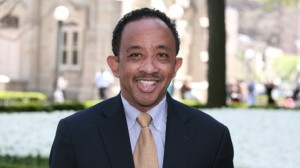 Dantley will speak at the E. Gerald Corrigan Conference Center at the Lincoln Center campus at 6 p.m. More information, along with a registration link, can be found online.

Dantley’s research focus is prophetic justice, a more vision-driven notion of justice that’s informed by “both a present and a future trajectory,” he said.

“What it is all about is having the ability, as an educational leader, to kind of denude, or expose, the inequities that are rampant in our schools, especially for children of color and children of poverty,” he said. “It’s about calling out those things that really need to be exposed as being unjust, but then also creating strategies to deal with them.”

Examples might include teaching strategies that are relevant to students’ heritages and cultural traditions, harnessing the resources in schools’ communities, focusing lessons on community problems, and taking a more activist approach to promoting equity in schools, he said.

This activism requires a more radical idea of social justice, not the “let’s just like each other” version that some are promoting, he said.

“There are some things about the system that are not ‘likable,’ that have to be changed. The mere fact that the majority of children in special education are often black and Latino males, that’s got to be looked at,” he said. “Why are teachers with very little experience often placed in urban schools and in schools that are more challenging? That’s got to be examined.”

“We’ve got to become activists about contextualizing education in an equitable environment,” he said.