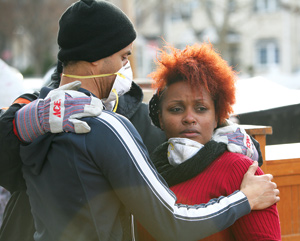 Kendra Newkirk, FCRH ‘2000, watches as the entire contents of her Rockaway home, destroyed by Hurricane Sandy, are removed.
Photo by Bruce Gilbert

Though Fordham campuses were largely spared, Hurricane Sandy still upended the lives of many in the University community. Faculty, administrators and students launched a variety of relief efforts to assist those in need.

Administrative offices across the University—from the deans’ offices to Campus Ministry and the Dorothy Day Center for Service and Justice—determined how to best help students, staff and faculty affected by Sandy.

“We’re trying to respond compassionately to the needs of those members of the Fordham family who have been so deeply impacted by this storm,” said Msgr. Joseph G. Quinn, vice president for University Mission and Ministry, whose office is leading a multifaceted response to post- hurricane recovery efforts.

“We did a search to see who lived in the areas that were really affected, and we reached out to those students to just ask, ‘Hey, are you doing alright? Let us know what you need,’” she said. Students were offered health services, counseling services, or whatever they needed to cope with their situations.

According to the deans’ offices, 71 students attending the Lincoln Center and Rose Hill campuses lost power, water, or heat following the storm. The Office of Residential Life housed any student that needed shelter in campus dormitories. For many students, power—and with it, normal life—was restored within two weeks of the hurricane’s landfall. 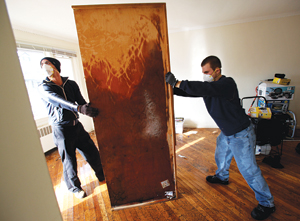 Students who lost their homes during the storm have been given housing on campus for the rest of the semester, paid for by an emergency fund.

Matthew White, GSB ’09, has been staying in McMahon Hall ever since the hurricane flooded his home in Rockaway Park.

“They got in touch with me the week of the storm, which was pretty impressive, because I was shoveling sand and making sure my family was okay,” said White, a student in the Graduate School of Business Administration. “I’m more than proud to say that Fordham helped me out in a time of huge need.”

In the five weeks following Sandy, more than $16,000 has been collected at Sunday Masses, interfaith prayer services, and various student activities toward a relief fund set up by the Office of the President. Non-monetary donations have also poured in.

Campus Ministry and the Dorothy Day Center have begun volunteer trips to hard-hit areas. On Nov. 17, a group of 22 students and five staff traveled to Breezy Point to aid Habitat for Humanity in the ongoing relief efforts. 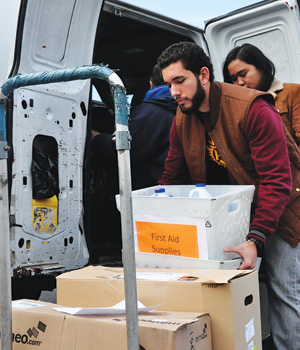 “We did everything from demolition to moving debris to cleaning a public space so that the people could host a fundraiser,” said Conor O’Kane, associate director of Campus Ministry at Rose Hill.

Campus Ministry continues to fill bins with items that are still needed by those affected, said Msgr. Quinn. Students transport the items to local distribution sites, such as the Kingsbridge Armory in the Bronx.

The day after Sandy hit the metropolitan area, FCLC sophomore Chris Hennessey and FCLC junior Jaime Rodriguez spearheaded a spontaneous effort at the McMahon dorms on the Lincoln Center campus, which they dubbed Occupy 109. The students organized a canned food drive in the dorm’s community room and launched the Facebook page, FCLC Hurricane Sandy Response. With the support of Maureen O’Connell, Ph.D, associate professor of theology, the effort grew in size with each passing day.

“We had a moral obligation to be there,” said Hennessey.

On Friday morning, Nov. 2, an additional 20 volunteers joined the effort to carry armfuls of supplies onto MTA busses heading into the powerless sections of lower Manhattan. By Saturday morning the number of volunteers had swelled to 60, said Rodriguez.

By that time McMahon Room 109 had become something of a command center after the local public school could no longer accept donations. Hennessey put a sign up at the school directing donations to the dorm, making McMahon the de facto distribution center for the Upper West Side. Neighbors signed on to help, with one family from the Time Warner building lending their car. Volunteers arrived from Maryland to Massachusetts, said Hennessey. 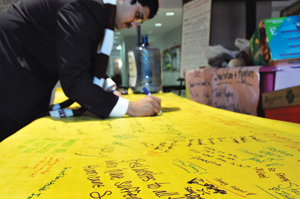 After the lights went back on downtown, the focus shifted to the outer boroughs. Using the Occupy Sandy website, the crew developed an online reputation for their specificity. In one case, a Brooklyn family requested a stroller and the group managed to get it to them later that day. A request for Pediasure, the children’s nutrition drink, was met after students secured a large donation of several cases from Duane Reade.

Social media drove many of the responses among the Fordham community. Mark Naison, Ph.D, professor of African and African American studies, put out a call for help on his Facebook page to assist Kendra Newkirk, FCRH ‘00, one of his former students. Newkirk had just moved into a new home in the Rockaways with her two small children. On Nov. 18, A group of Fordham alumni and Facebook friends joined Naison to help remove everything from Newkirk’s house so that FEMA could inventory what was lost.

“Kendra had her housewarming party on Sunday and the place was destroyed on Monday,” said Naison, who said seeing Sandy’s mass destruction was quite a depressing experience. “There were six of us and it took us four hours to carry every single possession that Kendra had out into the front yard. Clearly, the home was decorated with great love.” 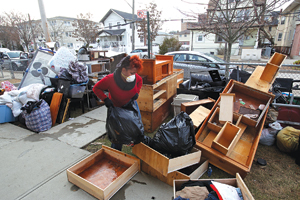 Home owner Kendra Newkirk, FCRH ’2000, bags personal items lost in Hurricane Sandy, which destroyed the contents of her home in the Rockaways.
Photo by Bruce Gilbert

Newkirk, who is now staying with her mother in the Bedford Stuyvesant section of Brooklyn, is an assistant director of a daycare in the Rockaways that also sustained damage.

With the community displaced, there is little chance the daycare will reopen anytime soon, she said.

“My heart is so burdened,” said Newkirk. “I have a family that I can stay with, but there are lots of people out there who don’t have that.”

Newkirk said that the cleanup would not have been possible without the help.

“It was just phenomenal. These are people I’ve never met,” she said. “I definitely didn’t anticipate the mental and spiritual support that I got. I didn’t expect that at all.”

O’Kane said that students, faculty, and staff who would like to volunteer are encouraged to visit Campus Ministry’s website, which will be updated daily with volunteer opportunities.

“This will be a very long process and I think the heart of Fordham’s responsibility to our neighbors and our brothers and sisters is to cultivate a critical awareness of that, especially when it begins to fade from the news cycle,” he said. 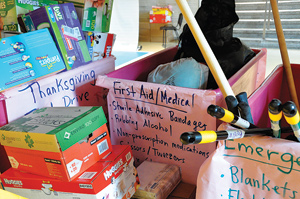 Supplies are being collected at the Rose Hill campus.
Photo by Joanna Klimaski

Joanna Klimaski and Tom Stoelker contributed to this report. To donate to the Disaster Relief Fund, visit http://www.fordham.edu/info/20094/campus_ministry