skip to main content
Return to Fordham University
You are at:Home»Education and Social Services»GSS Grant to Fund Trauma Treatment Practices 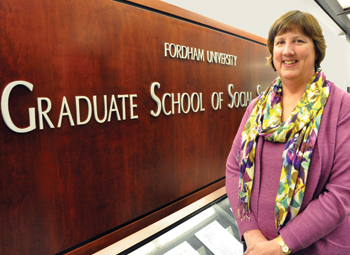 The four-year grant will enable to the center to pursue an ambitious multipronged education program that aims to change the way that social workers treat clients suffering from trauma.

Virginia Strand, D.S.W., co-director of the center and the principal investigator for the grant, said that it will allow the center to continue to disseminate a curriculum model that emphasizes both an understanding of trauma and of evidenced-based practices.

Since its founding in 2009, the center, which is in partnership with Hunter College, has been promoting a case-based approach to training students about trauma and its impact on children, adolescents, and their families. It’s a technique that has been used by the medical field for years, and Strand said it has proven effective in social work too, as it helps develop critical thinking and clinical reasoning.

“This whole approach parallels an evidence-based practice, where you’re constantly asking, what’s out there that you need to know to bring in, in order to do your job better as a social worker?” she said.
“That’s what they should be doing in their practice with clients.”

For example, if a client has come from the border of Mexico and Arizona, what might social workers need to know about the area’s drug wars?

“We know that most of the children in child welfare in New Mexico at this point are from families that have been affected by violence and the drug wars.”

Recognizing how trauma can be a factor in so many societal ailments is the first goal of the program; adopting evidence-based practices is the second, said Strand.

“It’s not just practice as usual. You don’t just go in and do what your supervisor has been doing for 15 years. You really look at the empirical literature to see what practices have the most support for being effective with the client population that you’re working with,” Strand said.

“It’s a way to bring the research literature and results and understanding into practice, and it’s been a major theme in social work education over the last decade or so.”

In the center’s first three years, it focused on training individual field instructors. With the new grant, it is shifting the focus from individuals to institutions, with the idea that a top-down approach will be more successful.

“We’re going to work with individual agencies to develop a network around our school of social work that is really strong in the ability to provide evidence-based trauma treatment,” she said.

Since changing an organization’s culture can be challenging, the center is partnering with the North Carolina-based National Implementation Research Network to help ensure the success of the agencies that are chosen. Nine other schools of social work will join Fordham in the endeavor, which will have 10 sites nationwide.

“It’s going to be a real laboratory for studying what works, what are the best ways to do this, who the client populations are that this really works best with, and in what organizational setting,” Strand said.

As part of a focus on the bigger picture, the center has also been making available to the 200 U.S. colleges that offer a master’s of social work degree a stand-alone course on treating children affected by trauma. Forty-five schools have already signed on.

“By the end of this four years, if we continue as we’ve been, we may have half the schools of social work offering this course,” she said.

“It’s a big project, and we’re thrilled to have the opportunity to do this.”