Celia Fisher, PhD, director of Fordham’s Center for Ethics Education, was among the advisers on a Substance Abuse and Mental Health Services Administration (SAMHSA) report that has determined the use of conversion therapy for lesbian, gay, and transgender (LGBT) youth has no scientific or clinical basis.

The report, which SAMHSA released today, concludes that, in fact, such therapy can be “devastatingly harmful” to those who undergo its treatment. 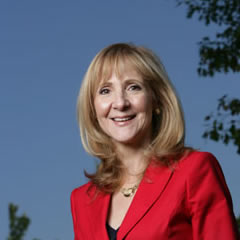 Celia B. Fisher, director of the Center for Ethics Education

SAMHSA and the American Psychological Association (APA) convened a panel of advisers in July to examine the scientific and clinical data behind conversion, or reparative, therapy—a treatment that aims to change an individual’s sexual orientation or gender identity.

The ensuing report, “Ending Conversion Therapy: Supporting and Affirming LGBTQ Youth,” found that the therapy is based on pseudoscience and did not meet the professional and ethical standards of the mental health professions. At best, these therapies are ineffective, and at worst, they can be profoundly detrimental, said Fisher.

“These therapies can involve very harmful treatments such as shock therapy—that is, showing an individual [photos of]a particular gender and shocking the individual so as to prevent a sexual response,” said Fisher, the Marie Ward Doty Endowed Chair and a professor of psychology.

“It can also involve berating and focusing on the immorality of the sexual orientation or gender identity. Basically, it’s a punitive form of treatment that has no scientific or clinical basis.”

Experts were called upon to examine the controversial therapy following the suicide of transgender teenager Leelah Alcorn, 17, whose parents forced her to participate in conversion therapy. The public outcry following her death led to the drafting of Leelah’s Law, which would ban the therapy.

SAMHSA’s report is an important step in the White House’s commitment to expanding the number of states who enact the law, said Fisher. Some studies estimate as many as one-third of children and adolescents who identify as a sexual or gender minority has undergone some kind of conversion therapy.

“Children, youth, and even young adults can experience post-traumatic stress disorder as a result, because it’s so stressful to be under these punitive and harsh conditions. It can also lead to depression or can increase a sense of dysphoria and further alienate individuals from their families,” Fisher said. “And, as in Leelah’s case, it can result in suicide.” 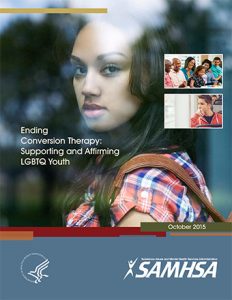 The report indicates that variations in gender identity and sexual orientation are normal in children. However, because of the prejudice and stigma they face, LGBT youth are particularly vulnerable to depression, anxiety, and other mental illnesses.

“But it’s not because of these children’s identity [as LGBT individuals]—it’s because of the way they’re treated by their families, their schools, and society,” Fisher said. “These are the conditions… that any disenfranchised and marginalized group may experience.”

The way to support sexual and gender minority youth, she said, is to affirm and accept each individual and to support his or her need for self-expression. The idea is not to push young people in one direction or another, but rather to give them space to explore.

Moreover, mental health professionals, physicians, school personnel, and others who work with children and adolescents need additional training in LGBT issues to better understand the needs of these populations, Fisher said.

“The issues included in this report are intended to enhance the lives and well-being of sexual and gender minority youth by helping to ensure they receive informed, evidence-based, and bias-free services. The systematic elimination of conversion type therapies is critical to the goal of reducing the health disparities facing this vulnerable population.”

Read more on the Ethics and Society blog.