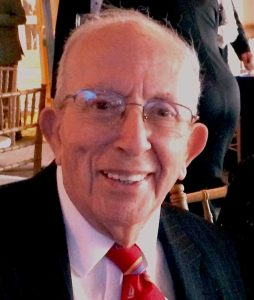 Thomas G. Vinci, Ed.D., UGE ’49, professor emeritus and associate dean emeritus at the Graduate School of Education (GSE), died on Nov. 24 at the age of 93.

“My dad considered Fordham his second home and counted many of his colleagues there among his best friends,” said his son Tom Vinci, FCRH ’73, LAW ’77.

“He cherished his decades-long association with such a wonderful institution.”

Vinci joined the Fordham family as an undergraduate at the School of Education, where he earned a B.S. in 1949. He earned an Ed.D. at Columbia University and began teaching at Fordham’s Graduate School of Education in 1967, first as an assistant professor and then as a full professor. He became associate dean of the school in 1974, serving in that position until his retirement in 1988.

Vinci in the 1949 yearbook, the year he graduated.

In 1983, the Doctorate Association of New York honored him with an “Outstanding Educator of the Year” award. A member of Kappa Delta Pi, an international honor society for educators, Vinci authored 27 chapters and monographs in textbooks and national publications.

James J. Hennessey, Ph.D., former dean of the Graduate School of Education, said Vinci’s tenure at Fordham, including a stint as chair of the school’s Division of Curriculum and Teaching, was one marked by outstanding service.

Vinci’s service to Fordham did not end with his retirement. He was the director of the  Graduate School of Education’s alumni association, and along with his wife, Elin, headed Fordham’s South Florida Alumni Chapter. For his service, the association in 1994 created the Thomas G Vinci Award to honor devoted GSE alumni.

A funeral mass will be held at St. Ambrose Catholic Church in Deerfield Beach, Florida, on Saturday, Dec. 3rd at 9:30 a.m.

A special mass of intention will be held at 12:15 p.m. on Tuesday, Jan. 24 at the Lincoln Center campus’ Blessed Rupert Mayer Chapel, Room 221, Lowenstein Center.