skip to main content
Return to Fordham University
You are at:Home»Education and Social Services»Fordham GSE Hosts Discussion on Education Reform

More than 30 of New York’s top voices in education convened at Fordham on March 19 for a second conversation on comprehensive education reform throughout the city and state of New York. 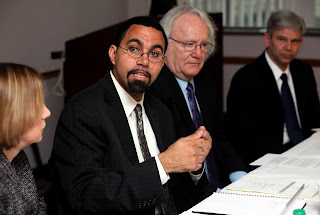 Members of the New York State Board of Regents joined education deans from colleges and universities in the New York metropolitan area to evaluate progress made since their initial gathering in 2011 and to address areas that still need work.

“We set out to create a comprehensive reform agenda that would try to tackle our biggest challenge—our failure as a state to ensure that all our high school graduates were college- or career-ready,” King said about the group’s 2011 gathering.

Since then, King said, New York joined 45 other states in adopting a Common Core State Standards curriculum; the state procured $700 million for efforts geared toward the federal Race to the Top initiative; and teacher evaluations and support were revamped.

“Overall college graduation rates have been relatively flat, and despite having some of the strongest school districts, there are still places around New York where less than half of students even graduate,” he said.

The group focused the March 19 meeting on teacher preparation, with particular attention to how the SED can synchronize reform efforts with education curricula at institutes of higher learning.

Among the major points discussed were:

Several deans raised concerns about how students in education programs currently gain clinical experience. They deliberated, for instance, whether to require student teachers to complete a semester-long placement in one school, or to continue with the current format of doing shorter placements at different school sites.

The group also discussed the dilemma some school districts face regarding whether to work with colleges and universities and take on student teachers, even though their shrinking budgets make it nearly impossible to hire any of those students in the near future. 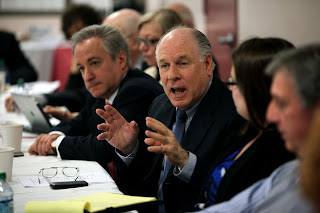 Alfred Posamentier, Ph.D., GSAS ’73, dean of Mercy College School of Education, advocates for the use of video taping in classrooms to train student teachers. Photo by Bruce Gilbert

In the meantime, the deans asked that the SED to communicate with school districts about the methods education programs use to train aspiring teachers. For example, some districts prohibit videotaping in classrooms—even though video is a key educational tool that helps young teachers self-evaluate.

“Nothing is more important than seeing yourself through the eyes of others,” said Alfred Posamentier, Ph.D., GSAS ’73, dean of Mercy College School of Education. “I’ve seen many young teachers who didn’t quite understand what they were doing right or wrong, until they saw themselves doing it.”