Joseph M. McShane, S.J., president of Fordham University, recollected his steadfast persistence, when he was dean of FCRH, of thinking that the spelling of Claude Mangum, Ph.D., was really “Claude Magnum,” or Claude the Great. 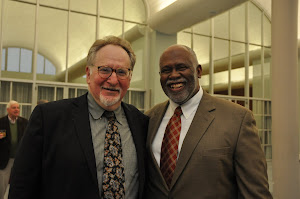 Mark Naison, Ph.D., Mangum’s colleague for 40 years and an integral force in founding an African and African American Studies Department at Fordham, recalled the early days when “our department’s theme song was Bill Withers’ ‘Just the Two of Us.’”

Father McShane and Naison, professor and current chair of the department, joined nearly 200 faculty, friends, administrators and former students on May 23 for a celebratory sendoff for Mangum, associate professor of African and African American Studies and former chair of the department, on his pending retirement. The evening was filled with etched memories and heartfelt tributes to Mangum, who was described as a passionate advocate for social justice and a voice of conscience at Fordham. He will now hold Emeritus status.

Mangum began at Fordham in 1969 with the university’s Upward Bound program. Eventually he, Naison and Quinton Wilkes (GSAS ’69, GSAS ’77), helped launch the African and African-American studies department, which began in 1969 as an Institute and became a full department in 1976. 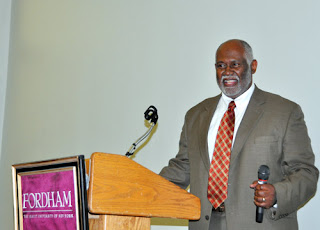 Today, Fordham offers a major and a minor in African and African American studies. The department is home to eight faculty members and also hosts the Bronx African American History Project, dedicated to “uncovering the cultural, political, economic, and religious histories of the more than 500,000 people of African descent in the Bronx.”’ It serves between 200-300 students each semester.

Former students Nilda Soto (TMC ’74, GSE ’78), assistant dean at Albert Einstein College of Medicine, and Craig Steven Wilder, Ph.D., professor of American History at Massachusetts Institute of Technology, offered gratitude to Mangum for sharing his intellect and his wisdom in the classroom, as well as ushering them through some turbulent college years.

“We showed up under rather awful circumstances as first generation college students from failing Bronx schools,” recalled Wilder, a 1987 FCRH graduate, “And you made us feel like we belonged.”

“And your name is misspelled; it truly is Magnum.”