skip to main content
Return to Fordham University
You are at:Home»Education and Social Services»Fordham and West Point in New Educational Partnership
West Point cadets conducting field training in July. U.S. Army photo by William C. Bunce/ West Point DPTMS VI.
The military science instructors in the United States Military Academy at West Point are among the most skilled and experienced in their field, many of them having recently walked off the battlefields of Iraq and Afghanistan.

Thanks to a new partnership with Fordham, they’ll learn the best ways to share that knowledge with the next generation of Army leaders.

Fordham’s Graduate School of Education (GSE) has signed a five-year agreement with the military academy to train its officers in the latest in educational curriculum and pedagogy. The five members of the first cohort, who will begin instruction in June, will earn a Master of Science in Education in Curriculum and Teaching.

Military science is a field that involves decisions such as what piece of artillery to use in a battle, or how to strategize to retake an urban area under siege. Unlike their counterparts in traditional arts and sciences fields, military science instructors haven’t been required to have education beyond a bachelor’s degree. The program will give them a chance to earn one.

“At West Point, they are developing the leaders of tomorrow’s armed forces, so you want people who are up-to-date and really top-notch in understanding their field and their work—but that doesn’t mean they’ve necessarily been trained to be teachers,” said Virginia Roach, EdD, dean of GSE.

“We have innovative pedagogies and approaches to teaching and learning that are just emerging through the research of our faculty; we are excited to implement them through this new program.”

Major John W. Spencer, strategic initiatives integrator/department strategic planner in the Department of Military Instruction at West Point, said that today’s battlefields are more complex than ever; instruction needs to reflect that.

“We’re creating people who are familiar with complexity, who can operate with complexity but still solve problems. Critical thinkers and problem-solvers are really everything. From the military domain, that has huge life-or-death consequences,” he said.

“West Point has the world’s foremost leader-development program, so we seek out partnerships with people who we know are highly respected in the domains of these topics—higher education being one of them. Fordham is the right place and [has]the right people.” 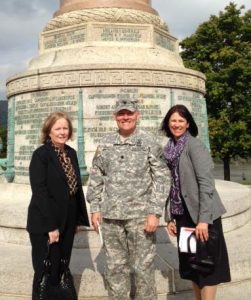 GSE Assistant Professor Rhonda Bondie, PhD, program coordinator for the master’s in curriculum and teaching, said that the GSE-West Point program will draw heavily on psychology because its curriculum focuses on motivation and problem solving. Technology will be covered too, as the academy uses simulations in training exercises.

The partnership came about thanks to the Viola Foundation, whose work focuses on national security, education, and faith-based initiatives. (Founder Vincent Viola, a West Point graduate, is a member of the Fordham Board of Trustees and the father of two Fordham graduates.)

Spencer said the foundation had previously helped the academy convert a class curriculum, History of the Military Art (From Plato to NATO), into a digital text.

Tim Strabbing, the executive director of the foundation who helped the two institutions connect initially, said that the new collaboration should “equip young officers to be even more effective teachers” than they already are.

Roach said that having GSE professors teach experts how to share their knowledge is a model she plans to replicate with other organizations, such as the NYPD, FDNY, and private corporations. As the GSE did with West Point, she noted that the college can tailor its curriculum to meet the specific needs of a partner organization.

“There are a number of different venues in which our understanding about how to teach to the full class and make sure everybody is engaged—and how to develop that instruction and execute it—can be a great contribution to the community,” she said.