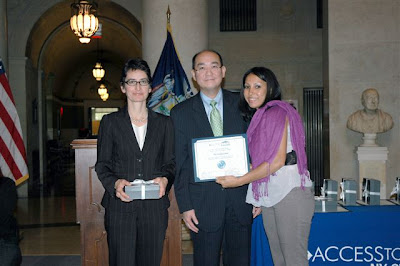 The Feerick Center for Social Justice has been awarded the 2010 New York State Courts Access to Justice Program Pro Bono Star Award at a ceremony held in the New York State Supreme Court in Manhattan.

The Center received the award on Oct. 25 on behalf of its Civil Legal Advice and Resource Office (CLARO). The award recognizes Fordham Law’s outstanding work in responding to the severe burdens placed on the court system by the consumer debt crisis.

Since its launch in February, 2008, CLARO Manhattan has helped over 700 litigants, drawing upon the services of 120 volunteer lawyers and 100 law student volunteers. A similar program was launched for the Bronx in 2009, and has assisted more than 730 litigants.

The award was presented jointly by the New York State Office of Court Administration, the New York State Bar Association, and the Office of the Mayor of New York. Above, Hon. Jeffrey Hong, supervising judge of the New York City Civil Court, presents a citation and crystal “star” award to Dora Galacatos (left), adjunct professor of law, and Wilma Lopez (right), administrative and programmatic assistant, of the Feerick Center.