skip to main content
Return to Fordham University
You are at:Home»Education and Social Services»Dennis Walcott on Nonprofit Messaging and Growth

Since the beginning of the semester, Dennis Walcott, GSS ’80, has been delivering talks to the class he teaches in his alma mater’s newly formed Masters in Nonprofit Leadership program.

But on Dec. 7, he delivered a talk to the larger Fordham community.

Walcott, perhaps best known as the former chancellor of the New York City Department of Education, spoke on how to manage nonprofits, including managing an agency’s public face.

The day after his nomination for public schools chancellor was announced, and with most of New York City’s media watching, Walcott walked his grandson to school at one of his other alma maters, PS 36 in Queens.

“I still get comments about that,” said Walcott. 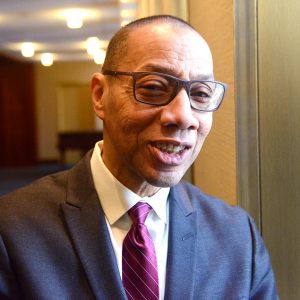 The instance was one of many examples of using media-savvy messaging, he said, but one that must be backed up with planning, substance, and integrity. He said that no matter the distractions, the message must always remain focused on an organization’s mission.

“One thing you can’t do is lose the perspective of why we’re in this business,” he said. “Whether you’re on the government or nonprofit side, you must maintain your moral compass, because that’s how you will relate to people.”

Walcott started his career as a teacher, where he was one of very few African-American men teaching kindergarten at the time. He later founded the Frederick Douglass Brother-to-Brother mentoring program to focus on kindergarten and grade school-age boys.

Walcott said that in order to to get press coverage for his new organization. He contacted a reporter from the Daily News. The reporter wrote a full-page article. Walcott also asked the director of community affairs at Channel 5 WNYW to place a public service announcement on Saturday morning before Soul Train. The response was overwhelming—too overwhelming.

“It was too much publicity too soon,” he said. “I didn’t know what I was doing when it came to raising funds, or how to set up an organization.”

It was Walcott’s first real brush with nonprofit management and rapid growth, he said—a theme he returned to repeatedly in his talk. He said that nonprofits should be strategic in the way they raise funds, combining both government grants with private dollars.

“You need to know when to say ‘no,’” he said. “If you’re totally dependent on government grants, then you’re setting yourself up for failure. That’s how a lot of agencies collapse.”

He said that in order to accept performance-based grants, agencies must have the infrastructure to deliver results. But these are not lessons learned easily, he said, recalling difficulties he had when he was the president of the New York Urban League.

“You have to anticipate that bullish times don’t last and you’re going to have to deal with a recession at some point,” he said. “You should operate from a very lean point of view and make sure you’re able to carry out the purpose of each grant.”

“That was a definitely the game changer, getting immersed in New York City’s complexities and getting involved in the decisions you want to make and sometimes don’t want to make,” he said.

With money being a perennial distraction for governments and nonprofits alike, one must not lose sight of the common goal of both institutions—to serve the people.

“Fordham’s field of social work brings that humanized discussion back to the conversation,” Walcott said.