skip to main content
Return to Fordham University
You are at:Home»Education and Social Services»Couple Makes Strides to Rid the World of Tetanus 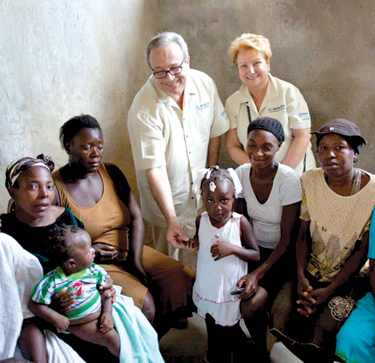 Tom and Rosemary DeJulio, president and first lady of Kiwanis International, visit with women and children as part of Kiwanis and UNICEF’s Eliminate Project.
Photo by Marco Domiani

What began decades ago for two Fordham employees as a commitment to volunteerism culminated this year in leading one of the world’s foremost service organizations.

This month, Thomas E. DeJulio, FCRH ’73, LAW ’77, Fordham’s general counsel, and Rosemary DeJulio, Ph.D., GSAS ’90, GSE ’00, assistant to the president, will conclude a year of international service as president and first lady of Kiwanis International. The couple worked with Kiwanis chapters from around the world to further the group’s primary endeavor, the Eliminate Project.

A joint effort between Kiwanis International and UNICEF, the Eliminate Project seeks to eradicate maternal/neonatal tetanus (MNT) worldwide. This deadly and excruciatingly painful disease claims the lives of 60,000 infants and of a significant number of women each year. The goal of the Eliminate Project is to vaccinate 100 million women worldwide to protect mothers and their babies, who contract MNT during birth—often from exposure to contaminated soil.

In April, the DeJulios traveled to Haiti to oversee the project’s campaign to vaccinate 1.2 million women there. The couple visited six sites both in Port-au-Prince and in several remote, rural villages.

“In our two days there, we saw close to 1,000 women get vaccinated,” Tom DeJulio said. “The idea was to help them understand that if they receive this vaccine, they’ll have a better chance at delivering healthy babies.”

The clinics that they visited were often no more than a single-room building with a dirt floor, tucked into the side of a mountain.

“You see the faces of the children you’re helping, and it’s a feeling that stays with you for the rest of your life,” Rosemary DeJulio said. “And when you see these children, you realize that every child has the right to be born healthy, no matter where they’re born.”

As president and first lady, the couple traveled to sites as far as Japan and the Philippines to share the results of the Eliminate Project to date. They succeeded in raising $40 million toward Kiwanis International’s $110 million capital campaign.

The DeJulios are longtime members of Kiwanis, with Tom beginning his tenure as a member of Key Club, the high school branch of Kiwanis. He continued with the group as part of the college group, Circle K, which he helped to bring to Fordham in 1970. Rosemary officially joined when Kiwanis began accepting women in 1987 (though she said she always participated actively alongside Tom), and the pair formed Fordham’s Kiwanis chapter in 1989. Today, the Fordham chapter has 62 members.

Following his year as president, Tom will continue serving on the board of Kiwanis International.

“We’re trying to impart the lessons we’ve been receiving for years, giving back to our community and transforming the lives of young people,” Tom said. “Because that is the broader goal of Kiwanis—to be advocates for the health, safety, and education of the children of the world.”