Founded in in 1910, Catholic Charities is just six years older than the Graduate School of Social Service (GSS), which marked its centennial in 2016. Now, Catholic Charities and GSS have created a new Centennial Scholarship to honor a century’s worth of the two institutions collaborating to help New Yorkers in need. 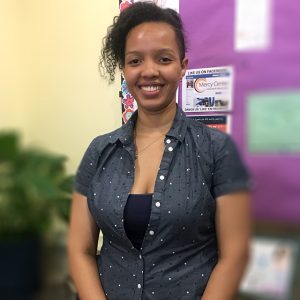 “Catholic Charities has been an important partner in the mission of the Graduate School of Social Service from its inception in 1916,” said Debra McPhee, dean of GSS. “The Centennial Scholarship is a wonderful representation of our historic and shared commitment to service and community building throughout New York City and the region.”

The scholarship will provide full tuition for a Master of Social Work (MSW) degree to a Catholic Charities agency staff member. Five scholarships will be awarded over the next five academic years.

As their inaugural Centennial Scholar, the two institutions have chosen Yesika Alvarez Mosquera, a family worker at Mercy Center, a community center affiliated with Catholic Charities that helps women and their families living in underserved communities in the Bronx. The scholarship award will be presented on June 19 at Grace Institute in downtown Manhattan.

Alvarez Mosquera said that after graduating from Lehman College she didn’t expect to find herself in social work. In fact, she was working in community outreach at the New York Hall of Science in Corona, Queens.

“At the time, I remember thinking, ‘Why aren’t immigrant families coming to this museum that’s within reach of their homes?’” she said. “Years later, I began to understand that limited English and resources keep many families not just from the museums, but from accessing many services—not only in New York, but around the country. That’s where I began my journey in identifying the needs of the immigrant communities I saw around.”

Having arrived from Colombia when she was 15 years old, Alvarez Mosquera knows the difficulties that some immigrants face, but with one caveat: She had papers.

“I didn’t have the maturity to understand how that little piece of paper determined me going to school and getting a job,” she said. “I was very lucky; I could have been DACA. I often think, ‘Why them and not me?’”

Monsignor Kevin Sullivan, Executive Director of Catholic Charities of the Archdiocese of New York said the scholarship will benefit not only Alvarez Mosquera, but Mercy Center as well. “Yesika’s dedication, commitment, and professionalism are a big part of Mercy Center’s success,” said. “We are confident that with the additional academic, leadership, and professional skills she’ll will continue to be a great asset to Mercy Center as they provide help and create hope for New Yorkers in need.”

Alvarez Mosquera said that she has thought deeply about her career and she wants to continue to help immigrant families “to connect with one another and form communities.”

“If they had the chance they’d do great, great things,” she said.

Along with the Centennial Scholarship, GSS has awarded seven additional merit scholarships to applicants from Catholic Charities, enabling them to enroll in the MSW program this fall. The individuals receiving a merit scholarship from Fordham are James Butler, from Life Experience & Faith Sharing; Ryan Glover, from Cardinal McCloskey Services; Gina Pilar Limbal, from the CCCS-Alianza LTW Program; and Whitney Harris, Brandi Barnes, Vaida Surujbhan, and Taneisha Beaumont from Catholic Guardian Services.