skip to main content
Return to Fordham University
You are at:Home»Education and Social Services»Campus Ministry Organizes Reprise of Sandy Saturdays 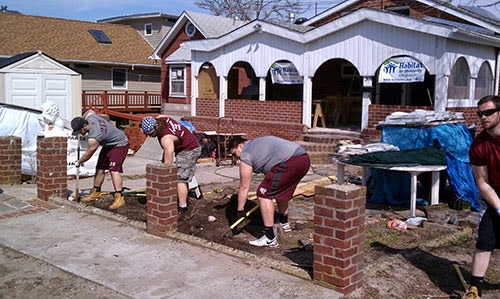 Today, Oct. 29, marks the two-year anniversary of Hurricane Sandy’s widespread devastation in New York and New Jersey. For weeks on end during late 2012, the spring of 2013, and the 2013-14 academic year, students led by Fordham’s Campus Ministry office joined with Habitat for Humanity-Westchester for weekly Sandy Saturdays, to help clear and rebuild neighborhoods in the Far Rockaways and Breezy Point areas.

Next weekend on Nov. 8, a Fordham contingent will return to the Rockaways with Habitat to do another Sandy Saturday.
“We have a number of student leader groups co-sponsoring this,” said Gil Severiano, administrative assistant in Campus Ministry. “Including the Pedro Arrupe Faith and Justice Community, the retreat leaders, the Interfaith Council, Global Outreach, and the Dorothy Day Service and Justice leaders.”
Severiano said that Campus Ministry recently did a Sunday alms collection to go toward the Sandy Saturday and received $850, which will help pay for Habitat supervisors needed to oversee the day’s construction. The Ram Van office has donated three ram vans to drive volunteers to the site, and Campus Ministry will fund food and other supplies.
Unfortunately, she said, the Sandy Relief Fund that the University had collected is depleted.
So far, 45 students and chaperones are signed up to go.
“We will be working on four houses in Breezy Point that are in the finishing stages, painting and sheetrocking,” she said. “So hopefully we are getting some folks home for the holidays!”
Any interested volunteers should contact Severiano at severiano@fordham.edu.  (Photos by Conor O’Kane)
Campus MinistryFordham UniversityHurricane Sandy
Share. Twitter Facebook Google+ Pinterest LinkedIn Tumblr Email