skip to main content
Return to Fordham University
You are at:Home»Education and Social Services»Bringing About a Revolution of the Heart 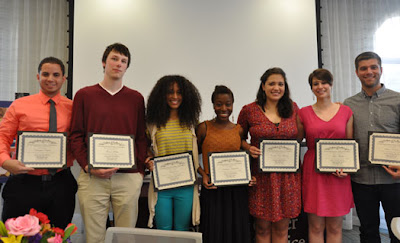 Acquiring knowledge is one great human endeavor; cultivating compassion and action for those who are less fortunate is another.

On May 2, the Dorothy Day Center for Service and Justice celebrated those graduating seniors who have done both: earned four-year degrees while doing service for those in need in New York area communities.
Citing the “amazing work” that Fordham students have taken part in, Sandra Lobo-Jost, director of the Day Center, recognized more than 80 students who have participated in projects ranging from tutoring Bronx youth, to fighting for a fair wage, to rebuilding homes destroyed by Hurricane Sandy.
Students in attendance received Spirit of Service awards, hugs, and words of encouragement from Joseph M. McShane, S.J., president of Fordham, as they steadied themselves for the transition to post-college life.
Through the efforts of the Day Center, said Father McShane, 4,600 undergraduates gave a million hours of service around the city and across the globe in the course of just one academic year, “to build a more just and loving world.”
“You make Fordham truly a place where the Gospel is lived.”
Lobo-Jost singled out two standout projects that the efforts of students had made possible:
• Hurricane Sandy recovery efforts: the Day Center, in collaboration with the Office of Mission and Ministry and other University departments, created a sustained schedule with Habitat for Humanity-Westchester of sending students to Breezy Point from January to the end of April. The volunteer response was so great, she said, “we literally had to turn volunteers away.”
• Kingsbridge Armory Development: in conjunction with the Northwest Bronx Community & Clergy Coalition, students worked to make certain the “empty castle” building so coveted by developers went to the Kingsbridge National Ice Center (KNIC). The KNIC signed a Community Benefits Agreement guaranteed to benefit Bronx residents with living-wage jobs, free community space in the development, free ice center access for schools, and more.
“It’s a great symbol of how Fordham can serve as a strong partner to our neighbors in the Bronx,” she said of the Armory project.
Seven students were recognized for their outstanding service (pictured top, l to r): Christopher Cepeda, Thomas Haskin, Ashley Davis, Catherine Nwachukwu, Cori Ring-Martinez, Jillian Abballe, and Stephen Erdman. 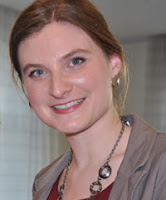 Cepeda, a commuter student who grew up in the Bronx near Yankee Stadium and attended Mott Haven public schools, was recognized for his work spearheading the Bronx College Town Program. The program introduces middle-school students to the idea of attending college and lays the groundwork.
“Growing up, I never thought I’d end up at Fordham—it’s a privilege to be here,” he said. “I want to give back to students who might not think about college, or think they can’t go, to see the possibility.”
Students also heard from Lauren Brodsky, (pictured left) site manager of Jumpstart Bronx at Fordham University, a program that trains college students to help Bronx preschoolers develop language and literacy skills. This year, 34 Fordham students volunteered in District 10 and 12 classrooms twice weekly during the academic year.
Brodsky said that the Jumpstart program honors five “core values” in its work—determination, learning, connection, kindness, and joy. “The work you’ve engaged in within the community . . . has reflected these values.
“Take them with you as you embark.”