skip to main content
Return to Fordham University
You are at:Home»Education and Social Services»Artist-in-Residence is an ‘Emcee First and a Scholar Second’ 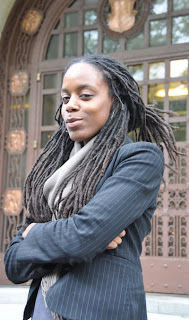 Fordham has had many artists and poets-in-residence, but Akua Naru may be the University’s first-ever “rapper-in-residence.”

A doctoral student at the University of Cologne, Germany, Naru was brought on as a visiting scholar and artist for the Bronx African American History Project (BAAHP). The 27-year-old, who hails from New Haven, Conn., will complete a four-week stint at Fordham’s Rose Hill campus on Sept. 27. So far, she has performed at a couple of cultural events, sat in on select classes and even lectured in Dr. Mark Naison’s “From Rock and Roll to Hip Hop” class while he was in Berlin, leading a group of Bronx youth on a hip-hop exchange trip.

“I was so excited about her research on women in hip-hop and also about her music, which I see as up there with Lauren Hill,” said Naison, professor and chair of the African and African American Studies department. “Listening to her lyrics, you get a vision of history and a real juxtaposition of language and imagery, and I thought we would benefit greatly from having her here.”

It was Naru’s musical career that inspired her to pursue an advanced degree with the goal of one day joining the world of academia, she explained.

“I’m an emcee first and a scholar second. I’m actually just a poet,” she said. “I figured, who better to tell the story than people like us?”

Naru is in the North American Studies program at the University of Cologne. Her dissertation will focus on women in hip-hop.

“In the scholarship you don’t find much on women in hip-hop. It’s more so about how men construct women within hip-hop discourse,” she said. “I’m a woman in hip-hop and I started thinking, if I were ever to have the opportunity to be noticed in the same way these [well-known] women [in hip-hop]are, then I would probably also be overlooked because of the same thing.”

Naru has set out to change that by focusing her research on the issues surrounding female rappers, from sexual liberation versus sexual objectification to the notion of female sexual agency, and whether it is even possible within a patriarchal context.

“I definitely want to teach about this, but I just finished an album, so I’m trying to balance,” Naru said. “I sort of put the research on the back burner while working on my album, hoping to come here and gain inspiration from the discussions I’m having with the faculty here. And that has definitely happened.”

Part of the following video for Akua Naru’s song, Tales of Men, was shot while she was on a month-long trip to Ghana. For more information on Naru, visit www.facebook.com/akua.naru.