skip to main content
Return to Fordham University
You are at:Home»Education and Social Services»Anne Williams-Isom: In the Zone

“One, two, three, four, peace is what we’re fighting for!” Thousands of young Harlemites and their families stride past Anne Williams-Isom, FCLC ’86, carrying homemade signs and chanting proudly in the August sun. “We’re the future, don’t you agree? Stop the violence on kids like me!”

From her perch on the raised street divider on Adam Clayton Powell Jr. Boulevard, the new CEO of the Harlem Children’s Zone (HCZ) jumps down to greet marchers with hugs, cheering them on and hurrying stragglers. It’s the organization’s 20th annual Children’s March for Peace, and it’s Williams-Isom’s job to make sure that all the marchers make it to their destination—literally and metaphorically—when so much threatens to derail them.

Though these streets are safer than they were 20 years ago, gun violence has cut short many young lives here. And poverty—which affects 65 percent of children born in central Harlem—throws up other roadblocks on the path to success. Forty-eight percent of households receive food stamps, 19 out of every 1,000 children live in foster care, and high schoolers have an average college-readiness rate of just 12 percent, according to 2011 data.

More than 12,000 children depend on Williams-Isom and HCZ’s “cradle to college pipeline,” with programs aimed at breaking the cycle of generational poverty in and around a 97-block zone in central Harlem. New parents can take workshops at the Baby College, kids get academic help in charter schools and traditional public schools, teens receive college prep, and families receive social services.

“It’s not just me running a school well or an after-school program well. I’ve got to run 24 different programs really, really well. Mediocrity can’t be,” she says. “It comes down to this sense of urgency: How many generations are we going to let fail?”

In her office at Promise Academy II, one of two HCZ-run charter schools that serve 1,800 kids, Williams-Isom reflects on how she came to lead this prominent organization, which attracts two-thirds of its $114 million budget from private donors—and which President Obama has touted as a model anti-poverty program for the nation.

“It comes down to this sense of urgency: How many generations are we going to let fail?”
Five years ago, she was leaving her 13-year career at the Administration for Children’s Services (ACS), the city’s child welfare department, and she wondered what she should do next. She met with Geoffrey Canada, high-profile education activist and founder of HCZ. The two had co-chaired a subcommittee for ACS, and she admired his work. He invited her to join HCZ as chief operating officer in 2009, and in February 2014 announced that she’d succeed him as CEO, with responsibility for running the organization’s diverse array of programs.

“Truthfully, I had no real experience in any of that [when I came to HCZ],” she says. But she had Canada’s confidence and mentorship. And she had her own experience, both professional and personal, to draw on. 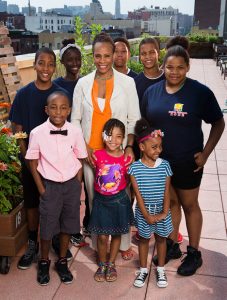 “I started to ask myself, ‘What would I do for my own children,’” she says. “I was using all of my skills—the legal skills, the skills from government, and the mommy skills,” and, she adds, the firsthand knowledge of Harlem that comes from raising a family there.

When she and her husband graduated from Columbia Law School, they bought a townhouse on Strivers’ Row, once a home to the city’s black elite. The couple raised three children there with the help of Williams-Isom’s mother, who lives with the family.

“I [had] the Baby College every day in my house!” Williams-Isom jokes. She’s very close with her mom, a Trinidadian immigrant who earned a nursing degree and rose to become one of the first black head nurses at Long Island Jewish Hospital. She raised Williams-Isom and her brothers alone in Queens after divorcing their father, also from Trinidad, who became violent toward her.

“The reason that my mom’s children and grandchildren have a different trajectory [than other struggling families] is because she had an education,” Williams-Isom says.

When it was time for her own college education, Williams-Isom chose Fordham College at Lincoln Center partly because she wanted to stay close to her family. She majored in political science and psychology.

“I just remember loving the plaza,” she says. “I thought it was great because it attracted so many different people.” In her office she keeps a photo of herself and her best girlfriends from Fordham, including Debbie Mitchell, FCLC ’85, who is godmother to the younger of  Williams-Isom’s two daughters.

Mitchell said her friend was always very focused. “She knew how to have fun, but she also worked really hard.”  When she read about Williams-Isom’s appointment as CEO, she “thought it was a perfect fit.”

“She loves children,” said Mitchell, a television and digital media producer. “She’s always thinking about how to make things better for them.”  After graduation, the two went to St. Thomas together. “We had a great time. We felt as though our lives were ahead of us.”

After law school, when five years as an attorney in law firms left her unfulfilled, Williams-Isom began her career at ACS. Working closely with then-ACS commissioner Nicholas Scoppetta, she helped reform a child welfare system that was rocked in 1995 by the tragic case of Elisa Izquierdo, a 6-year-old girl who was beaten to death by her mother.

“Anne is enormously committed to the population that she’s serving now, and she always felt that way at ACS,” Scoppetta says. “She’s very strong, she’s very tough, but that doesn’t detract at all from how appealing she is. And that all comes from life experience that is very relevant to what she’s doing.”

In July, New York City Mayor Bill de Blasio appointed Williams-Isom to the advisory board for his initiative to create Community Schools, which will offer health services and family support in addition to academics. She hopes the new schools can be a step toward reform.

“When we think about income inequality, when we think about what the future looks like for our communities, [troubled schools are] no longer just an isolated problem,” she says. “It’s a problem that we as Americans have to face, and if we don’t, we’re going to have a workforce that’s poorer and less prepared.”

“Somebody met me the other day and said, ‘You seem like you don’t take a lot of mess.’ And the truth is, there’s a bunch of us here who are like that. We are loving,” she says, singing the word, “but … loving the kids is not enough here. You’ve got be able to move these kids.”

She says teachers also need to be data-focused.

“We want to make sure [kids are] prepared, and I don’t know how you do that without making sure you’re keeping really good data and making sure we’ve got the best and the brightest working with our children. Because that’s what I would want for my kids.