skip to main content
Return to Fordham University
You are at:Home»Education and Social Services»Righteous Extremism and Educational Leadership 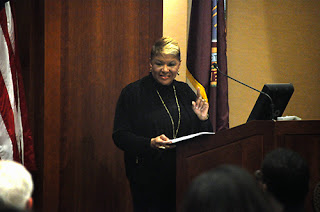 “These people don’t know it, but they’re about ready to go to church,” was what civil rights activist Clarence Jones said before Martin Luther King, Jr. delivered his I Have A Dream speech.

The same could have been said about Olga Welch, Ed.D., dean of education at Duquesne University, upon delivering the first Barbara L. Jackson Memorial Lecture at Fordham. Welch, who evoked King’s oratory, as well as the messages of Gandhi and Mother Teresa, roused a crowd of educators to their feet with her talk on Nov. 19. The Graduate School of Education sponsored the event.

Welch cited the lecture’s namesake, Barbara L. Jackson, Ed.D. as the perfect example of “transcendent leadership.” Jackson, who died last year, was a professor in the Division of Educational Leadership, Administration, and Policy from 1987 to 2008, as served as chair from 1997 to 2003.

Though Welch’s lecture on leadership was clearly steeped in research, the stirring content and cadenced delivery moved the crowd at the Corrigan Conference Center.

She said that leaders are being scrutinized in unprecedented ways and that, nowadays, powerful people  move “with the caution of alley cats” instead of taking calculated risks. In education, she said that the shifting landscape makes leadership particularly complex.

She called on educators to adopt the path of “righteous extremism” that King espoused in Letter from Birmingham Jail some 50 years ago. Part of this path, she said, is to listen closely to the communities they serve; as King said,  ”We are caught in an escapable network of mutuality.”

“The sense of a shared destiny must be up close, not detached by protocol,” she said. “We must bring a sense of outrage.”

Leaders must be visionary, yet practical enough to be revolutionary. She suggested that a “traveling leadership theory” needs to be steeped in research and center on the leader’s identity: elegant slogans and picturesque language are simply not efficient, and a leader must engage on an authentic and personal level.

“An inauthentic leader can’t lead,” she said, adding there was “nothing inauthentic about Jesus, Gandhi, or Mother Teresa.”

Two great downfalls of a leader are indecisiveness in times of crisis, and dead certainty at times of complexity. And healthy ego shouldn’t be misconstrued as narcissism; leaders need to develop a positive self-regard, she said.

“Making mistakes is part of leadership, but the best leaders are vision centered,” she said.

GSE is launching a new scholarship fund in her honor. This award will be given to a student who demonstrates financial need, academic merit, and is enrolled in a program in educational leadership at GSE with a preference given to a student with a strong interest in urban education. For more information contact Michelle Adams at miadams@fordham.edu.