skip to main content
Return to Fordham University
You are at:Home»Editor's Picks»Veteran News Anchor Dan Rather on America’s National Identity: “The Heart of Patriotism is Humility”

“The first thing to know is that these are two different words with two different meanings,” Rather told an audience at a Q&A event organized by Fordham’s Francis and Ann Curran Center for American Catholic Studies on Feb. 15. “The heart of patriotism is humility. The heart of nationalism, though, is a breast-beating conceit or arrogance.” 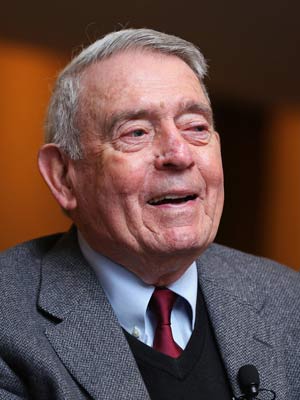 The Emmy Award-winning journalist said some of the values that are rooted in America’s national identity include public education, freedom of the press, and inclusion.

“The appeal of America worldwide is the essence of the idea and the ideal,” said Rather. He recently published What Unites Us (Algonquin Books of Chapel Hill, 2017), a book of essays on American values.

A Voice of Reason

Though he stepped down from his CBS Evening News post 13 years ago, Rather continues to weigh in on the issues he feels are shaping the United States and the world at large. He has more than 2.5 million followers on Facebook, a platform he said is allowing him to remain a “steady, reliable voice of reason that can put events into context and historical perspective.”

Now 86 years old, the veteran journalist said one of the major divisions among American citizens today revolves around race. He described his first major news assignment covering the beginnings of the civil rights movement of the 1960s. He said the first time he saw a KKK rally, the “hair on the back of my neck stood up.”

“I thought to myself, “If I—a white person with a press tag—if this has this kind of effect on me, what effect could it possibly have on African-American families and their children?” he said.

Having been on the front lines of some of the country’s biggest news events—from John F. Kennedy’s assassination to Watergate to the wars in Iraq and Afghanistan—Rather said that “every generation is tested.” He maintained, however, that the values that have defined the country for centuries are what has carried it through “bad times.”

“There’s a great struggle going on, a struggle for the soul of our country,” he said. “Who are we as a country? What are we about? [Those are questions that are] being decided now.”

Rather expressed special concern about the escalating attacks on the free press, which he argued are an attempt to evade checks and balances on people in positions of power.

“We need to see clearly that a truly free and fiercely independent press is the red beating heart of freedom and democracy,” he said.

He said that America has gone through major transitions that have led to fear among some of its citizenry, starting with the Immigration and Naturalization Act of 1965.

“The demographic of the United States changed so dramatically in the wake of that immigration reform that this country today is not recognizable to a lot of people, particularly those at the lower end of the socioeconomic scale,” he said. “They’re fearful about the jobs at stake, but even more, I think they fear [a]change in the [American] culture.”

Calling the formation of the United States of America a “great historical experiment,” Rather said America’s ability to remain a united front could prove difficult without a firm commitment to its founding principles.

“This idea and ideal is not an empty hope,” he said. “If we put our minds to it, if we stick to this willingness of heart, then we’re going to be okay.”