skip to main content
Return to Fordham University
You are at:Home»Commencement»Use Your Education for the Common Good, Says Commencement Speaker

The head of the world’s largest museum and research complex called on Fordham’s Class of 2016 to use their Jesuit education as a tool for the common good at a time when citizens have deep doubts about America’s greatest institutions, and national conversations are marked by vitriol, suspicion, and fear.

BELOW, see a photo gallery of Commencement Day
David Skorton, MD, the 13th secretary of the Smithsonian Institution in Washington, D.C.—an accomplished cardiologist, musician, and former university president—said that this year’s graduates are among the best-educated and informed generation ever. Along with the privilege of a college degree, he said, comes a special opportunity and obligation to refocus our nation’s debate and direction. 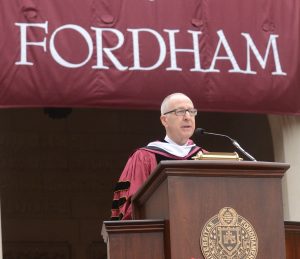 “As the world’s greatest democracy, that more than two-thirds of the people do not trust our government should be a clarion call to us all,” Dr. Skorton told an audience of nearly 20,000 gathered on Edwards Parade on May 21 for the 171st Commencement ceremony. “This crisis in trust affects every aspect of our society.”

At the same time, the world itself is more unpredictable, he said, with increasing economic turmoil, and democratic and humanistic ideals “under siege.” Conversations taking place on college campuses and elsewhere on race, climate change, and income inequality are lacking in civility.

To rebuild trust in our institutions and in one another, he urged the new graduates to use the tools of a democracy–communication, education, laws, and “intolerance of inequality”–to lift the sagging spirit of the nation. Taking inspiration from both a Jesuit education and from Pope Francis’ messages of ending global injustice, he urged graduates to “be part of the virtuous circle” of change.

“Fordham has taught you that education is not only a path to a more satisfying and secure future but as well a tool for the common good,” he said. “We are counting on you.”
(story continues below)

If the new graduates were in want of ways in which to act upon Dr. Skorton’s entreaty, they got it from Joseph M. McShane, SJ, president of Fordham. 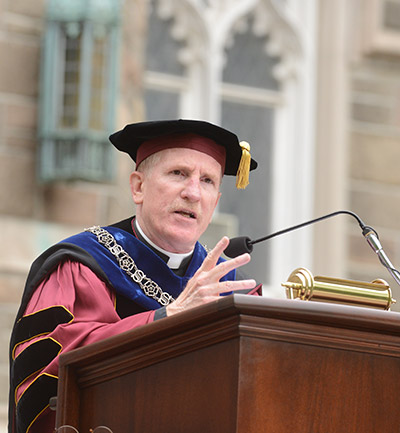 “You were educated in that impossible, chaotic, frenzied, and imperfect city presided over by the Statue of Liberty,” Father McShane said. “Here, we seek to create one nation out of many peoples.” That endeavor—to welcome all people with love, respect, and goodwill—is a noble purpose that has not yet been achieved, he said. ”It is a dream that calls us to work every day to make this city, the mother of immigrants, the true city on a hill.

“Therefore, be bothered that the promise of America has not been fully realized.

“But don’t just be bothered,” he said. “Do something about it. Matter. Make a difference. God did not put you here to be ornaments. You were brought to this moment so you could take on the world, set it on fire, and change it.”

Father McShane said the members of the Class of 2016 have learned the quality of mercy from their parents and their time at Fordham. As they are the graduating during the Jubilee Year of Mercy, such work is their calling.

”Shelter the homeless. Clothe the naked. Feed the hungry. Give drink to the thirsty. Comfort the sick. Console the dying. Visit the imprisoned. If you make the works of mercy the defining characteristics of your lives … you will be true sons and daughters of Fordham.”

In addition to Dr. Skorton, this year’s recipients of honorary degrees include