skip to main content
Return to Fordham University
You are at:Home»Editor's Picks»Fordham Freshmen Get a Hearty Welcome on Opening Day
Photos by Chris Taggart and Dana Maxson
As new students and their parents drove into the Rose Hill parking lot for the Aug. 27 move-in and orientation, they were greeted with cheers, smiles, and high-fives—and even a little conversation from Joseph M. McShane, S.J., president of Fordham.

Father McShane chatted with the new arrivals on everything from Arthur Avenue’s best thin-crust pizza to what they can expect as new Rams.

“You’re in Loyola?” Father McShane asked a freshman hailing from Minnesota who was in the back seat of her family’s car. “You’ve hit the jackpot. That used to be a former Jesuit residence. You’re going to love it.”

The 1,344 families who arrived for opening day at the Bronx campus came from 42 states— from New Hampshire to Maryland to Illinois to Kansas.

Awaiting their arrival at the freshmen dorms were upperclassmen and football players like Matthew Donovan of Shrewsbury, Massachusetts. The greeters hauled boxes of clothes, storage containers, TVs, and mini refrigerators for the new students.

Jordan Better and his family were grappling with the damaging effects of tropical storm Harvey in their home town of Houston, but Better was relieved by how smooth move-in went with the help from his new community. “They don’t leave you on your own here,” said the Jogues Hall resident, who joked that he was lucky to be paired with a “minimalist” roommate since he probably brought one too many boxes.

Christopher Wildes of Astoria, Queens, was looking forward to transitioning into a “new chapter of life.” 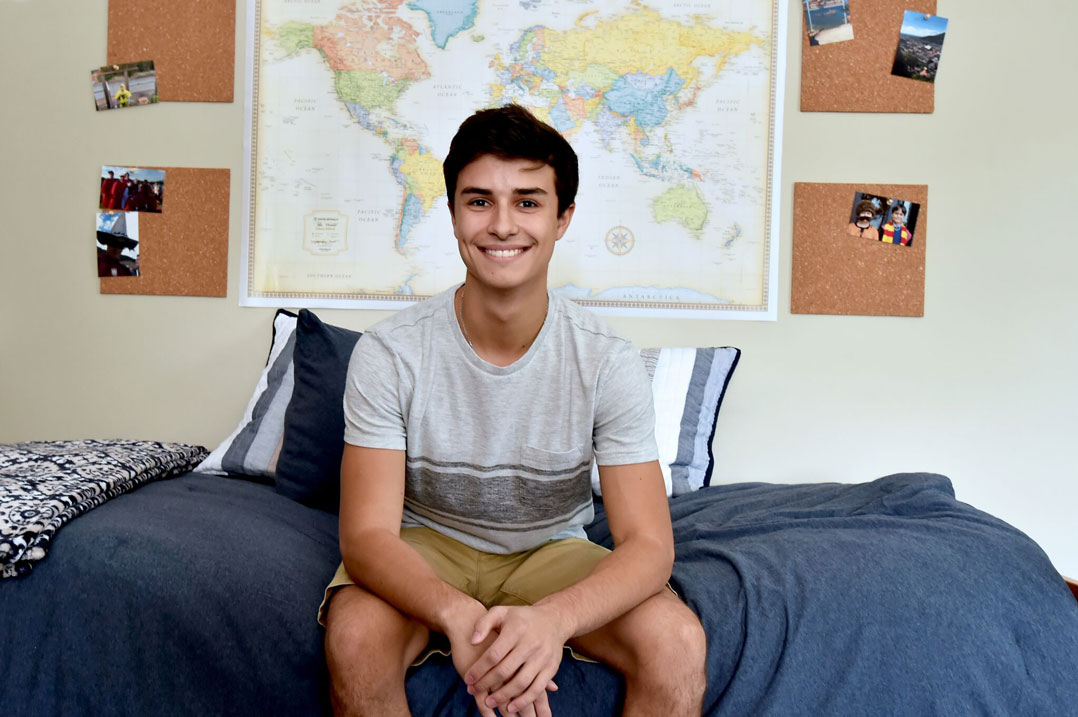 Sotiris Georgakopoulos, of Saint James, New York, in his dorm room in Loyola Hall at the Rose Hill campus. Photo by Dana Maxson

“My brother is a senior here, and when I visited it just felt like a second home,” he said.

Sotiris Georgakopoulos, of Saint James, New York, decorated his room with a map of the world and some photographs from his frequent globetrotting.

“I’ve been all over Europe—England, Scotland, France, Belgium, Germany, the Netherlands, Austria, Switzerland and Greece,” said Georgakopoulas, who hopes to study international political economy. “I’m kind of a nerd for economics, but I have a particular interest in geopolitics, and understanding how other countries function.”

Down at Lincoln Center, near the heart of Midtown Manhattan, Father McShane encouraged students to take advantage of one of the University’s greatest assets: New York City.

“Whatever your major, be sure to minor in New York,” he said. “This is an important part of your existence here at Fordham.”

The skyline views from McKeon Hall drove home the point to students and their parents that they were in one of the world’s great cities.  On the 22nd floor, Jessi McBrearty and Sara Duffy settled into their southward facing room, with the Hearst Tower and the Time Warner Center soaring in the background.

Just a few floors down, Teagan Giese of Mechanicsville, Virginia, savored the view of the Metropolitan Opera with her parents, John and Nicole. Her father said that, while he’s not a city person, he couldn’t deny the impact.

“My reaction is ‘holy smokes,’” he said. 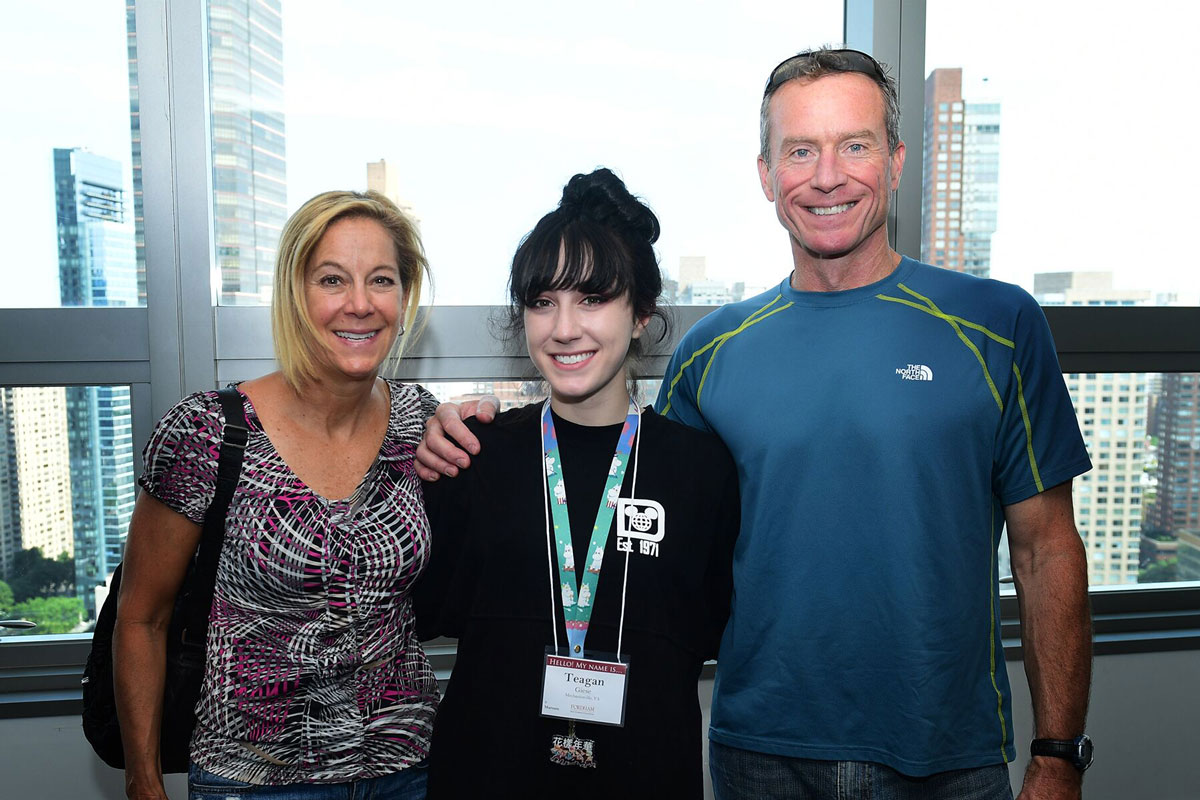 Teagan Giese of Mechanicsville, Virginia, with her parents John and Nicole in McKeon Hall at the Lincoln Center campus. Photo by Chris Taggart

Her mother Nicole said she “loves” the big city and mentioned visiting here when Teagan was young. When she decided to go to school in New York, Nicole admitted she was concerned.

“I said, ‘No we can’t afford it, you have to go to a Virginia school,’” said Nicole. “Well, little did I know there are all kinds of ways to help pay for private school. Who knew?”

Down on the plaza, Rachel Kim and her mother Amy represented the less awestruck, though no less appreciative, New Yorkers. Amy plans to commute from Queens.

“When I applied [for colleges], I thought ‘Everyone wants to be in New York City and I’m already here,’” she said. 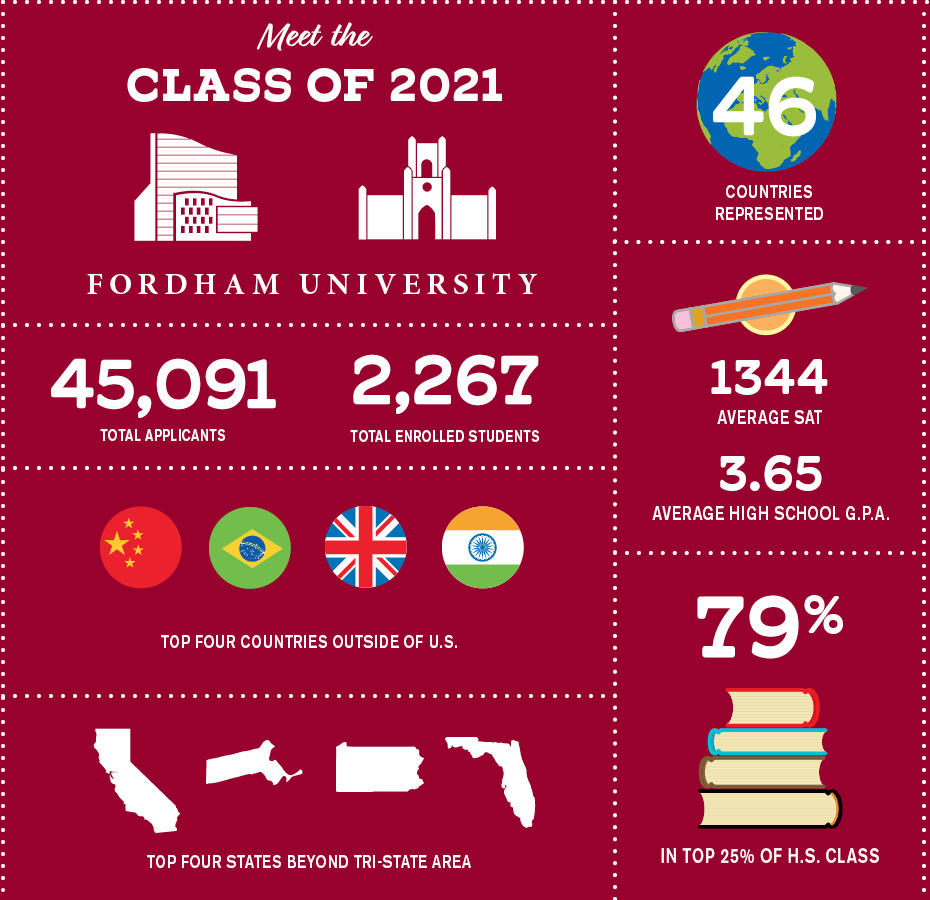 Infographic by Molly Wright
With 45,091 applications as of August 28, Fordham University realized a record applicant pool in this most recent admission cycle. The University welcomed 2,267 students to the Class of 2021, with 1,124 enrolling at Fordham College at Rose Hill, and 549 enrolling at Fordham College at Lincoln Center. The Gabelli School of Business at Rose Hill is now home to 481 new students, while the Gabelli School at Lincoln Center has opened its doors to 113 students.

Academically talented, the freshman class has a mean test score of 1344, and a mean high school GPA of 3.65 on a 4.0 scale.  In addition, six students are enrolling as Cunniffe Presidential Scholars, 92 as Semifinalist Scholars, and 105 as Dean’s Scholars.

The University experienced a 5 percent rise in enrollment from New England, and enrollments from the Southwest region has almost doubled from the year before, with the most notable growth in Texas. Last year, the University welcomed 126 students from California; this year that number has climbed to 135.