skip to main content
Return to Fordham University
You are at:Home»Editor's Picks»Fordham Founder’s Dinner: A Night of Gratitude
Photos by Chris Taggart and Jerry Millevoi
In a year that saw a record of 40 Fordham Founder’s Scholars, more than 1,000 University alumni and friends gathered at Cipriani Wall Street to celebrate those student achievers and the donors who have made it possible for them to dream big. 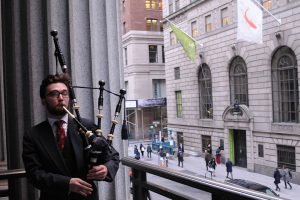 The 17th annual Fordham Founder’s Dinner, held March 19, raised a total of $2.2 million for the Fordham Founder’s Undergraduate Scholarship Fund and Faith & Hope | The Campaign for Financial Aid. So far, $131 million has been raised toward the campaign’s $175 million goal.

Speaking on behalf of her fellow Founder’s Scholars, Fordham College at Rose Hill senior Genie Hughes, a biology and theology major, thanked the donors for helping the scholars overcome financial barriers to education, and for being “bothered into action.”

Watch our Founder’s Scholars video and hear Freshman Chloe Djomessi Siakam sing the National Anthem.
She spoke of concepts—as opposed to facts—that she learned during her tenure at the University. She said new ideas and a “diversity of thought” have helped her and her classmates to make sense of things.

“It’s easy enough for a bio student to view life as a series of signal transduction pathways and neuronal networks that allow us to function,” she said. “But life—the thing we spend every day living—is made up of so much more than that.”

Founder’s Scholar Marla Louissaint, currently performing in the national tour of Beautiful: The Carole King Musical, took the stage and sang a moving rendition of “Will You Still Love Me Tomorrow” for the attendees.

A World of Infinite Possibilities 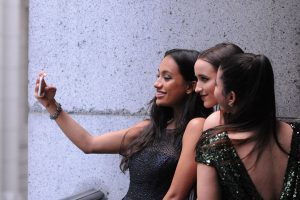 Selfies on the balcony

In thanking the donors for their generosity, Joseph M. McShane, S.J., president of Fordham, said their financial support—indeed all forms of scholarship support—“opens up a world of near-infinite possibilities.”

Those possibilities are reflected in the lives of the donors themselves, “with their talents, their vision, their discerning wisdom, and their passionate integrity.” In particular, he called out the evening’s three Founder’s Awards honorees: John R. Costantino, Esq., GABELLI ’67, LAW ’70, PAR; Barbara Costantino, PAR; and William J. Loschert, GABELLI ’61.

“They have lived their lives in ways that bring lustre to the University,” said Father McShane. “It also means that, having reflected deeply on the transforming impact that a Fordham education had on them, they have come to the realization that like all of us, they were the beneficiaries of a legacy they didn’t create.” 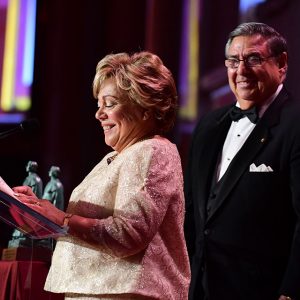 Bob Daleo, GABELLI ’72, chairman of the Board of Trustees and the event’s co-chair, said the Costantinos had a “shared love” of the University, and were generous in their support for the new Law School building, Fordham athletics, WFUV, and two scholarships—the Costantino Family Endowed Scholarship Fund, and the Edelman Postgraduate Fellowship in Neuroscience.

In accepting the Founder’s award, Fordham Trustee Emeritus John Costantino paid homage to his parents; his father, an orphan who emigrated to America from Sicily when he was just 14 years old, had little chance for a formal education.

“The proudest day of my parents’ lives was the day they attended my graduation at Fordham Law School,” he said. Although his father passed away just two months after the graduation ceremony, Costantino’s mother always felt that his father had “gotten his wish” to see him become a lawyer.

Barbara Costantino said she was honored to share the stage with her husband of 48 years, whom she’d known when he was a student in 1963 at Fordham’s business school. Back then, she said, she’d read and typed his college and law school papers—free of charge.

“I have often felt that I probably should have gotten an honorary Fordham degree [for that],” she said jokingly, and to applause. 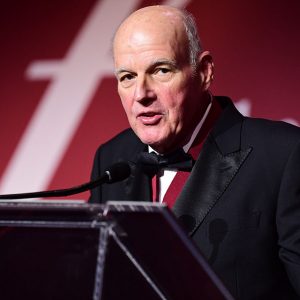 Trustee Fellow William J. Loschert, who has hosted more than 1,000 Fordham students at his home in London and is a steadfast supporter of Fordham faculty, scholarships, and building projects, captured the evening with the shortest acceptance speech—at approximately 30 seconds. He thanked Father McShane, Gabelli School of Business Dean Donna Rapaccioli, the Fordham faculty, and “most importantly the students.”

“Enjoy the rest of the evening, have another glass of wine, and God bless,” he said.

Although Loschert proved to be a man of few words, Father McShane called him “an extraordinary presence for Fordham in London … He has been a fatherly figure.”

In his speech, Father McShane described Fordham’s founder, Archbishop “Dagger John” Hughes as “a fundraiser who was not afraid to knock on any door.”

“He was, thank God, incapable of dreaming small dreams,” Father McShane said. “Therefore, with zeal and urgency, he took on New York and American culture with what some thought was an unholy impatience.”

“Now I may be prejudiced, but the greatest of all his realized dreams was Fordham,” said Father McShane. “The dream was bold, its dividends have been rich—but the costs associated with ensuring the continuation of that legacy were, and are, high.”

He called the evening’s honorees “worthy successors” to the legacy of Dagger John. Just as Archbishop Hughes gave hope to the recent Irish immigrants, the Fordham Founder’s awardees have given the promise of an education to the scholars.

“You’re, for them, patron saints,” he said. “You are men and women, who, not knowing our students’ names, have harbored great hopes for them.”
View a slideshow