skip to main content
Return to Fordham University
You are at:Home»Commencement»‘You Are Ready’: After Four Years of ROTC, Cadets Become Military Officers
Photos by Chris Gosier
At a May 20 commissioning ceremony at the University Church on the Rose Hill campus, 24 cadets in the Fordham ROTC program became 2nd lieutenants, sworn in by a seasoned military leader who gave a stirring address about the changes and challenges awaiting them.

“As you will soon find out, your service will be a transformational experience,” said Lt. Gen. Maria R. Gervais, a highly decorated 35-year Army officer who serves as deputy commanding general and chief of staff with the U.S. Army Training and Doctrine Command at Joint Base Langley-Eustis in Virginia.

As Army officers, she said, “you will practice leadership each and every day, in everything you do.”

“You will lead the best soldiers in the world, and they will be hungry, hungry, for your leadership,” Gervais said. “My advice to you is even on your worst day, your worst day, it must be the best day for the soldiers that you lead. Each and every day, you should strive to be a leader that inspires your soldiers.”

It was the 93rd commissioning ceremony for the Fordham University Army Reserve Officer Training Corps, also known as the Yankee Battalion. The program trains cadets from Fordham and other New York-area universities; nine of this year’s cadets were graduating from Fordham.

It was also the last commissioning ceremony for Joseph M. McShane, S.J., who is stepping down as president of Fordham at the end of June. In his own remarks, Father McShane lauded the cadets for being leaders and role models on their respective campuses.

“You have spent long hours in drills. You have spent your summers not at the Jersey Shore but in camps where you rubbed shoulders with other young women and men for whom the service of others is a passion and service of our nation is a sacred vocation,” he said.

“On behalf of the proud and grateful universities that you represent, I would like to thank you for being a leaven in all of the collegiate communities in which you have lived,” he said. “I find myself awestruck whenever I see you, and whenever I think of what it is that you wish to do with and through your service of our country and the world.”

Michael K. Hoblin Sr., FCRH ’91, GSAS ’03, a retired Army lieutenant colonel, former professor of military science with Fordham ROTC, and president of the Fordham Veteran Alumni Chapter, praised Father McShane for all he had done to advance the program and raise its national profile. 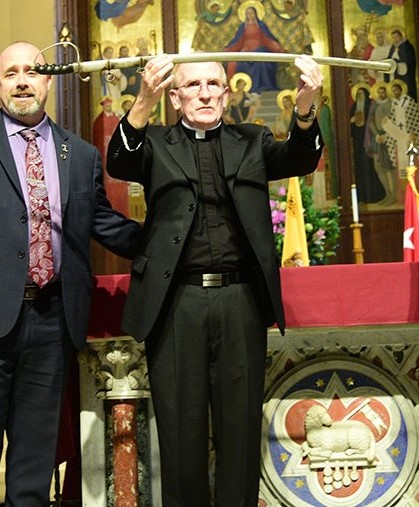 Father McShane, after being presented the President’s Saber

Father McShane was presented with the President’s Saber from the original Fordham ROTC class of 1929, which alumni located for the occasion. “I respectfully request that this saber … be displayed in your office for years to come,” Hoblin said, calling it “a token of our gratitude for all you have done for Fordham, the Fordham ROTC program, and our country.”

At the same time, Father McShane was announced as the first recipient of a new award, the Father Joseph McShane, S.J., Award for Outstanding Faculty and Administrative Support to ROTC.

Among other awards to distinguished cadets, Elizabeth Thomas, of Columbia University, was presented with a separate President’s Saber that is given to a graduating cadet every year; Olivia McNeil, of Fordham, was given the General Jack Keane Distinguished Graduate award, named for the retired general and 1966 Fordham graduate.

In her address, Gervais told the cadets to “listen to your NCOs and veteran service members, because great officers learn to listen, and continually learn in order to lead,” she said.

“They made it to this point in their lives because of the … values you instilled in them—values like loyalty, integrity, duty, honor, and country. We owe you a sincere thanks and a debt of gratitude for supporting your cadet’s decision to serve in … the best trained, the best equipped, the best fighting force, and the most respected force, in the world.”

Among her final words to the cadets? “You are ready.”

“You have achieved so much in such a short period of time,” she said. “In the process, you gained confidence in yourself, in others, and in your team. You have learned self-discipline and what it takes to be the best you can.”