skip to main content
Return to Fordham University
You are at:Home»Commencement»University to Award 10 Honorary Doctorates at 170th Commencement

At its 170th Commencement on May 16 at the Rose Hill campus, Fordham will award honorary doctorates to 10 accomplished individuals: keynote speaker Nana Lordina Dramani Mahama, First Lady of the Republic of Ghana and a respected advocate for empowering women and the poor, and nine other leaders from among the clergy, the military, the legal profession, and the social work and education professions:

Douglas M. Brooks is director of the White House Office of National AIDS Policy. A licensed clinical social worker, he has held many high-level policy positions related to the AIDS epidemic including board chairman of AIDS United in Washington, D.C., and member of the Presidential Advisory Council on HIV/AIDS. He has advised governments and nongovernmental organizations on addressing AIDS and directly managed many federally funded programs aimed at treating and preventing the disease.

Matthew Goldstein oversaw the transformation of the City University ofNewYork as its chancellor from 1999 to 2013. Once dubbed an “institution adrift” by a mayoral task force, the university added schools and colleges, built up its faculty, increased graduation rates, achieved record enrollments, and raised its academic profile. He is a nationally recognized education expert who has served on the U.S. Teaching Commission and the New York State Commission on Higher Education, in addition to leading national summits on public higher education.

William Loschert, GABELLI ’61 is a retired chairman of ACE Global Markets who served for six years on the Fordham University Board of Trustees. He is a generous Fordham supporter who has funded scholarships, an endowed chair in entrepreneurship, a lecture series at the Fordham University London Centre, and other enhancements while also giving generously of his time to advance the University’s mission. A residence hall on the Rose Hill campus is named in his honor. 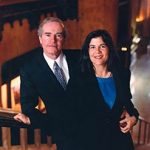 Thomas A. Moore, LAW ’72, is a widely respected trial lawyer who has twice been named Lawyer of the Year by The National Law Journal, and who was the most frequently mentioned attorney in New York Law Journal‘s Verdicts and Settlements Hall of Fame for medical malpractice cases from New York, published last year. He and his wife, Judith Livingston, funded the Brendan Moore Chair in Advocacy and the Moore Advocacy Center at Fordham Law School, named for Moore’s late brother.

Judith Livingston, also a distinguished attorney, was deemed “a legal legend” by Lawdragon and is the youngest person and first woman to be admitted to the Inner Circle of Advocates, an elite group of the country’s top 100 trial lawyers. She has been recognized twice by Best Lawyers as the New York Medical Malpractice Lawyer of the Year; in other pursuits, she has been active with Judges and Lawyers Breast Cancer Alert. She and her husband, Thomas A. Moore, received the Fordham Founders Award for 2014.

Admiral Michael Mullen retired as chairman of the Joint Chiefs of Staff in 2011. He led the military through the end of combat in Iraq and a new strategy in Afghanistan, and also promoted the new technologies, international partnerships, and new antiterrorism methods that led to the elimination of Osama bin Laden in 2011. He advocated for shorter combat tours, more attention to veterans’ posttraumatic stress, and more public support for service members, and played a key role in dismantling “don’t ask, don’t tell” so gay service members could serve openly.

His Eminence, Jaime Lucas Cardinal Ortega y Alamino, Archbishop of Havana played an important part in sustaining the Catholic Church in Cuba under communist rule. Under his leadership, the church in Cuba has become an effective mediator between the government and dissidents, and in 2010 Cardinal Ortega worked with the government of Raul Castro to secure the release of 126 political prisoners. He also had a key role in Pope Francis’ successful efforts to bring about dialogue between the governments of Cuba and the United States.

Mary Anne Sullivan, TMC ’73, is one of the top energy lawyers in the country and a partner at the global firm of Hogan Lovells. She served as general counsel for the U.S. Department of Energy in the Clinton administration, and before that as the department’s deputy general counsel for environment and nuclear programs. She provided critical legal support for the world’s first deep geologic disposal facility for radioactive waste and negotiated the first agreements with electric utilities on voluntarily reducing greenhouse gas emissions.

Dennis Walcott, GSS ’80, served as chancellor of New York City’s public schools from 2011 to 2013, ushering them through major changes. Under his leadership, the city’s education department replaced large low-performing high schools with smaller schools, resulting in higher graduation rates and more college enrollments, particularly for disadvantaged students of color. In addition, he launched a major effort to improve the quantity and quality of the city’s middle schools and led a $13 million expansion of after-school programs.