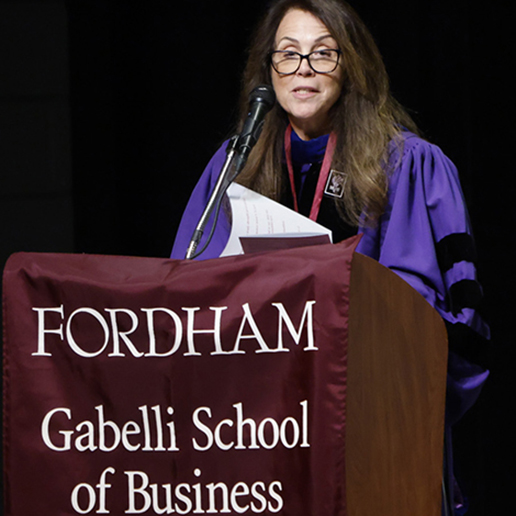 Photos by Marisol Díaz
This year at the Gabelli School of Business award ceremony for Rose Hill students, held on May 20, Dean Donna Rapaccioli, Ph.D., used her final dean’s address to mine past speeches for “best of” morsels of advice and observations to share with graduating seniors.

She began with advice from a 2011 award ceremony address in which she told students to mind how they treat colleagues.

In 2016, she stressed the importance of humility, she said. 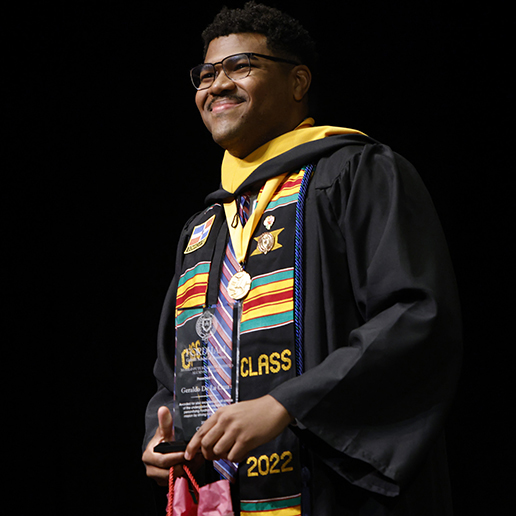 “People often misunderstand humility, it doesn’t mean hiding your accomplishments or being a doormat,” she said. “Humility really involves being open to others’ opinions, reflecting on your experiences, embracing your success, but also admitting your mistakes.”

She said that she remains proud of the many changes she helped facilitate and bring to fruition during her tenure, from the renovations of two buildings that house the school at Rose Hill and Lincoln Center to the naming of the school for one of the University’s most generous donors. However, she said that her legacy will not be found in bricks and mortar.

“You are my legacy, so thank you for that,” she told the graduates, before offering a parting bit of advice. “I want every business student to be a compassionate leader who contributes to society and lives a balanced life … Reach high, care about others, be an innovator and creative thinking, make your community and the planet better.”

‘Put Me In Coach’

Graduate Andrew Pace was, along with Brandon Aptilon, the class’s co-valedictorian. He echoed Rapaccioli’s remarks on cultivating relationships. In his speech, he said that there are two characteristics that mark all Fordham students. One is that they are“expert excellent relationship builders,” he said. The second is grit.

“For Fordham students there’s not a sense of entitlement, there’s just a sense of ‘Put me in the game coach; let me show you what I can do,’” he said.

For his part, Aptilon echoed the importance of humility. He said that when he was in high school he did not get many awards, but Fordham changed all that.

“I don’t say that [I won awards] to boast, rather I say it to encourage all of you who are entering this new stage of our lives where nothing that came before really matters,” he said. “I challenge all of you to make the most of it and be who you want to be. If there’s something you want, let that be your driving force.” 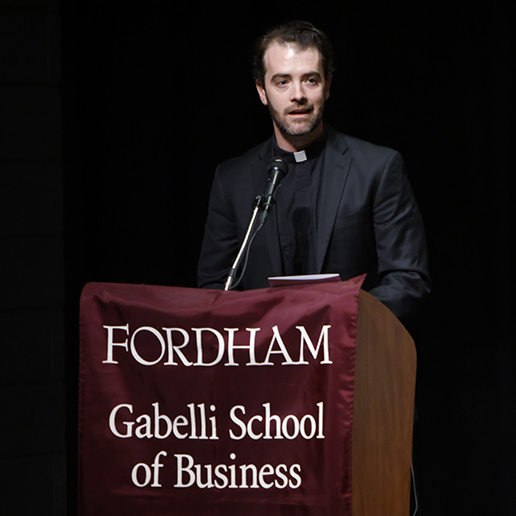 Jake Braithwaite, S.J., GABELLI ‘11, GSAS ‘15, who was selected as the Alumnus of the Year, harmonized with Brandon’s observation that who they were before graduation is not who they were about to become. He had no designs on becoming a priest after graduating from business school, he said. Though, much to his surprise, his education revealed itself to be incredibly useful in his chosen trade.

While teaching math at a local Bronx grade school, he helped the school balance spreadsheets to pave the way for a school lunch program. Braithwaite said his business education has served him in ways he never expected, particularly after taking a vow of poverty–something his students have picked up on. Using the Bronx vernacular for money, i.e.-”bread,” the young people have taken to calling him “Jake-no-bread” behind his back.

He said he has embraced his new name. 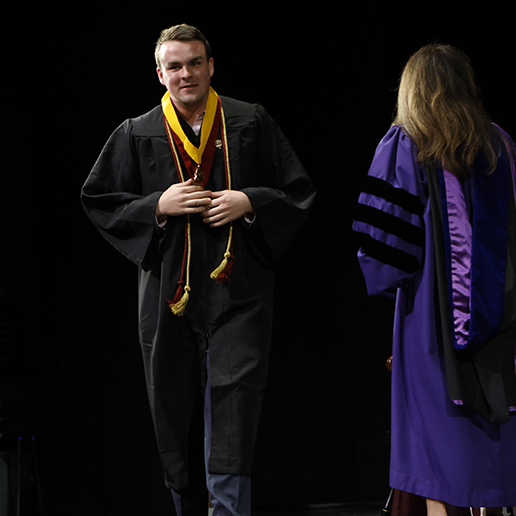 He told the students that from this day forward their Fordham experience is their backstory.

“I want you to hold on to today as a way that God is planting seeds so that that new name can bear beautiful flowers and will grow into history. I know it because I’ve seen it happen to me and I’ve seen it happen to my classmates from Fordham,” he said. So, Know that I worship the way that God is already at work in you and I pray for the ways that God will continue to work in utterly surprising ways in you.”