skip to main content
Return to Fordham University
You are at:Home»Business and Economics»Gabelli School of Business Celebrates Master’s and Doctoral Graduates’ Perseverance in Uncertain Times
Photos by Dana Maxson
Addressing 720 new master’s and doctoral graduates of the Gabelli School of Business on May 24, Mandell Crawley, chief human resources officer at Morgan Stanley, urged graduates to “be incredibly proud” of what they’d “accomplished during such an uncertain and challenging time.”

Crawley, who received an honorary doctorate during the ceremony, recalled his own experiences in the executive MBA program at the Gabelli School during another fraught period: the Great Recession.

“I was in a cohort that represented many of the banking institutions engulfed by the crisis,” said Crawley, who earned his MBA in 2009 and has since risen to a series of high-profile senior leadership positions at Morgan Stanley, including chief marketing officer and head of the firm’s private wealth management business. “My classmates and I relied on each other and got through that experience together.”

Indeed, this idea of building community through a tough shared experience was a common theme at the ceremony, present in nearly every speech the audience heard. Throughout the afternoon, the graduates—including 20 military veterans who were also feted at a special Victory Bell-ringing ceremony on May 20—were cheered on by hundreds of friends, family, faculty, and members of the Fordham community who had gathered on Edwards Parade.

The Value of ‘Strategic Persistence’ and the Gabelli Network

Donna Rapaccioli, Ph.D., GABELLI ’83, dean of the Gabelli School, told graduates that their time together at the University helped them hone a capacity for what two-time Fordham graduate Caroline Dalhgren, director of global consumer insights at Tiffany & Co., calls “strategic persistence.”

“What does that mean? Caroline says it’s that Fordham graduates are ‘scrappy’ in the best possible way,” Rapaccioli said. “You do not expect that anything will ever be handed to you on a silver platter. Instead, you are go-getters. You are solution-finders. You know what you want—and you come up with exciting plans to get there.”

Rapaccioli described Dahlgren as an ideal member of the alumni community, someone who has helped hire many Fordham graduates in her role at Tiffany & Co. and who always says yes when Fordham students and alumni reach out to her for career advice. Rapaccioli encouraged graduates to do the same as active members of the Fordham alumni network—more than 200,000 people worldwide, including 40,000 Gabelli graduates, she said.

“When they contact you asking for career guidance, or when they email you asking for help in their job search, say yes,” she said. “As Caroline puts it, ‘We only will be successful in building this alumni network if we all say yes.’”

Addressing graduates at his final degree ceremony as president of Fordham, Joseph M. McShane, S.J., cited the challenges they encountered as they pursued their degrees: the COVID-19 pandemic and the financial instability it spurred, the country’s ongoing issues with race and inequality, and budding international political strife.

“My dear friends, let’s be honest: Your time in graduate school has not been an easy time,” he said. “You found yourselves in graduate business programs preparing to take on a world—and a global economy—at a time that both of them were seriously out of joint.”

He congratulated them on persevering, even as they “may have been a bit battered along the way,” and encouraged them to never forget the lessons they learned as Fordham students, namely how to be business professionals marked by competence, conscience, compassion “and deep commitment to the cause of the human family.”

A Heartfelt Tribute to Dean Rapaccioli 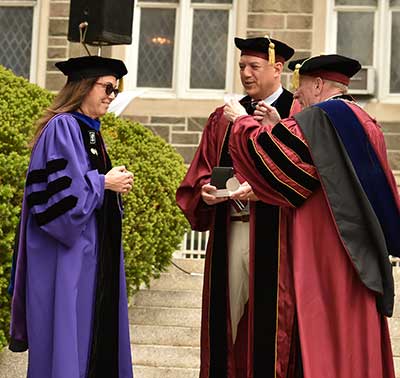 Father McShane also offered a special thank-you to Rapaccioli, who is stepping down at the end of June to return to teaching and research after a remarkable 15-year tenure as dean. He surprised her with a Magis Medal, making her the first-ever recipient of the award, established this year to honor longtime administrators who have strengthened the Fordham community “through their discerning wisdom, extraordinary leadership, and unstinting commitment to excellence in the service of others.”

“She has led the school with energy, vision, devotion, and love,” Father McShane said of Rapaccioli, who led the unification of the University’s undergraduate and graduate business schools in 2015, launched Gabelli’s first doctoral programs, and oversaw significant growth in enrollments and rises in rankings at the school. “In the process, she has transformed it and made it a leader not only in American business education, but a leader and trailblazer in international Jesuit business education. Therefore, we are all in her debt, a debt that is so great that I could never adequately thank her.”

A Framework for Fulfillment 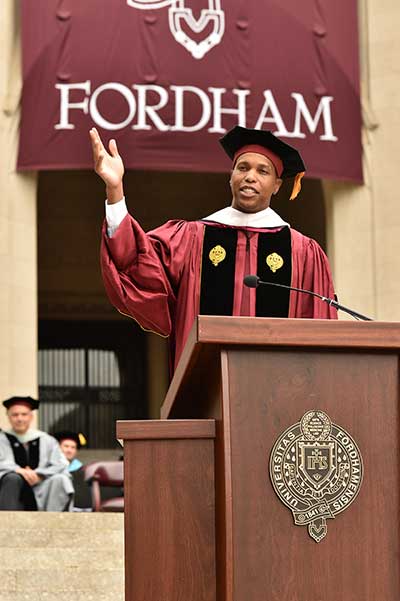 In his remarks, Crawley, a native of Chicago’s West Side, spoke about his professional path. He has been working at Morgan Stanley for three decades, since he landed a work-study position with the company in high school.

“My journey was far from linear; it was quite circuitous,” he said. “I started out as a 17-year-old intern running errands for bond traders, earning a wage of $5 an hour, [and] worked my way across different parts of the Morgan Stanley ecosystem.”

He continued working on the firm’s municipal bond sales and trading desk in Chicago while attending Northeastern Illinois University at night, transferring to Morgan Stanley’s New York City headquarters once he’d earned his bachelor’s degree in economics. In 2004, he garnered his first management role, and in 2014, he was elevated to chief marketing officer, a position he held until taking over the company’s private wealth management business in 2017. He has been the firm’s global chief human resources officer since early last year.

Crawley shared two frameworks he uses to assess his professional progress—one to determine if it’s time to do something different, and one to determine what career he should be doing.

For the first, he told graduates to ask themselves four questions, suggesting that if the answer to any of them is ‘no,’ they may consider reevaluating their role: Am I learning? Am I growing? Am I having impact? Am I happy? Meanwhile, he said, graduates should ask themselves a second, broader set of questions: Am I interested in the work? Does it align with my core capabilities or superpower? Can I be useful?

Crawley used his love for basketball as an example of how interest doesn’t always align with capability. “I’m interested in the game. I’m a tall guy. Unfortunately, I wasn’t wired for it. The NBA won’t be reaching out to me anytime soon,” he joked. But he encouraged graduates to bring passion to their careers.

“The energy and enthusiasm you have right now? Do not lose it; let it drive you,” he said. “Channel it throughout what I know will be long and successful careers for all of you.” 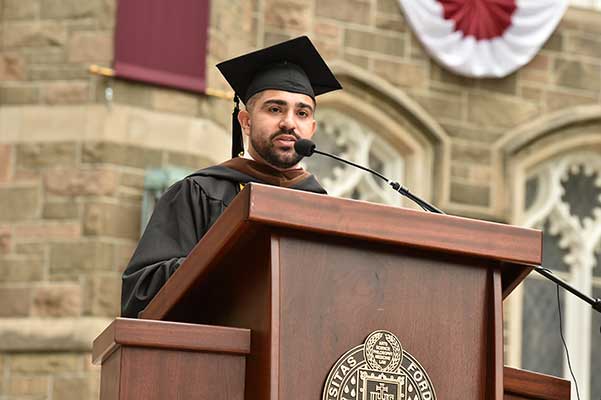 The ceremony also featured two student speakers: Jason Gurtata, president of the Student Advisory Council and a graduate of the full-time MBA program, and Aaron Martins, who earned an M.S. in global finance.

Looking back to the beginning of his Gabelli journey, Gurtata remembered meeting his cohort for the first time—on Zoom.

He said that while they may not have fully understood what they were in for at the outset—”Did we have any idea of what it meant to immerse ourselves so deeply that all we did was dream about LinkedIn Premium features during our naps?”—he relished being on the other side and credited his Gabelli experiences for teaching him the “most important lesson”: Strive to be better today than yesterday.

As he and his classmates learned “not to chase dollars but to chase our dreams,” Gurtata said he not only gained a new family of Fordham Rams but he also learned the true meaning of success.

“Success is not a test score; it is not that job at a high-end bank, investment firm, or media company; it is not about your salary,” he said. “It is about who we are as individuals. We have learned to partake in business with a purpose, but I encourage each and every one of you to live your life with a purpose.”

Nowhere Near the End 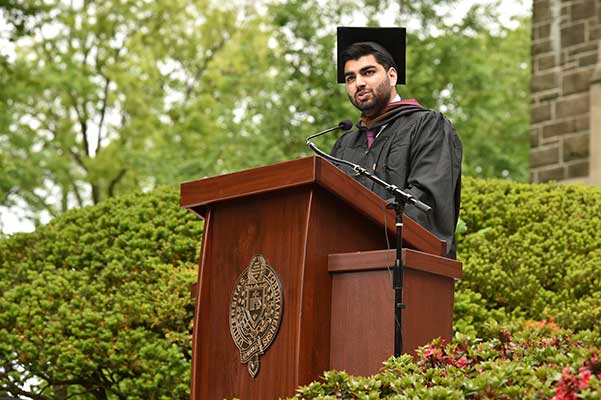 Martins echoed the day’s theme of persevering through the pandemic’s “unchartered territory.”

“We showed that we will adapt and overcome whatever life will throw at us,” he said. “In difficult, uncharted territory we were still focused on our goals and aspirations, ready to keep moving forward.”

He stressed that while their Fordham education was concluding, the ceremony certainly wasn’t the end of the road.

“This may be the end of the chapter, but the book is far from over,” he said.